Puerto Rico’s future might be statehood, independence or more of the status quo, but change is unlikely to be won through voting alone.

On 3 June 2022 representatives from the US Democratic Party, Raúl Grijalva, Nydia Velázquez and Alexandria Ocasio-Cortez, travelled to Puerto Rico, where they joined the island’s resident commissioner Jenniffer González Colón, a Republican, to discuss the Puerto Rico Status Act. This concerns Puerto Rico’s relationship with the United States. If passed, it would authorise a plebiscite for Puerto Ricans to express their wishes on the island’s political future and bind US Congress to act on their mandate. ‘Getting to this point has not been an easy process’, said Grijalva. All four members of the bipartisan group support the act; others, both within Puerto Rico and the US, vehemently do not.

The US acquired control over Puerto Rico in the aftermath of the 1898 Spanish-American War, in which it also acquired the Philippines and Guam, and granted citizenship to Puerto Ricans in 1917. After lengthy negotiations, in 1952 the island became the world’s only Estado Libre Asociado (Associated Free State). The US Congress holds ultimate power over Puerto Rico’s legal affairs, but the island’s single Congressperson is a non-voting member of the House of Representatives and its inhabitants have no right to vote for the US president. A territory ‘foreign in a domestic sense’, Puerto Rico is neither part of the federation that makes up the US nor a sovereign entity.

Armed rebellion has often been necessary for the decolonisation of nations that have faced similar circumstances to Puerto Rico, but its inhabitants have never supported direct action en masse. A combination of the memory of violent colonial traumas and the limited successes of the Estado Libre Asociado have made electoral exercises the preferred way to express collective opinions.

In 1966 the United States-Puerto Rico Commission on the Status of Puerto Rico determined three potential status options for the island, two of which would change Puerto Rico’s relationship with the US. The first option was to keep the Estado Libre Asociado, a system that is currently so unpopular that it was left out of the latest draft of the Puerto Rico Status Act entirely. Still, the political elites who have built their careers supporting the status quo continue to lobby for it.

The second option would see Puerto Rico annexed as a state, which would impose federal tax responsibilities that the island does not have as a territory. Annexation would require the adoption of English as a lingua franca and other forms of assimilation. Support for annexation steadily increased from the late 1960s onward due to the increasing importance of the federal welfare state’s subsidising of the shortcomings of the Estado Libre Asociado’s economy. Those wanting statehood not only lead the New Progressive Party, the dominant force in Puerto Rico’s elected government, but have succeeded in rallying votes in favour of their cause in non-binding plebiscites that occurred in 2012, 2017 and 2020.

The third option would be the end of Puerto Rico’s relationship with the US via independence. Some Puerto Ricans argue that full sovereignty is the only path to true decolonisation. But fears about the loss of US citizenship and federal funding have kept those supporting independence in the minority. Younger generations, however, appear curious about opportunities to develop Puerto Rico without imperial restrictions.

In the mid-1980s a fourth option emerged, as the Federated States of Micronesia, the Marshall Islands and, later, Palau became republics associated with the US. By signing a Compact of Free Association these countries ended their territorial status, but continued receiving financial and military assistance from the US. Known by some as the ‘sovereign Estado Libre Asociado’, this alternative appeals to Puerto Ricans who reject US colonialism but still believe that close economic and diplomatic relations with the US are necessary. Though this option is acceptable to some members of the Puerto Rican independence movement, various annexationists claim it resembles the Estado Libre Asociado so closely that the problem would remain unresolved.

A farewell to arms

There have been efforts to fight Puerto Rico’s political subordination ever since the Spanish violently colonised the island’s native Arawak/Taíno population in the early 16th century. Puerto Rico’s location at the entrance of the Caribbean Sea has made it geopolitically important from a defence point of view; uprisings have proved difficult to organise due to the militarisation of the island. The most significant revolt against Spanish rule occurred in 1868, when a group of Puerto Ricans took up arms in the town of Lares – and were put down by the colonial authorities.

Creole elites saw the aftermath of the US invasion in 1898 as an opportunity to assert a political power previously denied to them by the Spanish and their preference for Spanish-born leaders. Instead, the US organised a colonial civilian government in Puerto Rico through the Foraker Act of 1900, which introduced an executive council made up of eleven people, all of whom were appointed by the US president. Electoral participation for Puerto Ricans was limited to the legislature.

The Great Depression posed significant challenges to Puerto Rican society, which remained largely rural and dependent on agriculture. This precariousness provided a platform for the pro-independence Nationalist Party of Puerto Rico, first founded in 1922. After a brief period attempting to assert power through the island’s limited electoral structures, the Nationalist Party adopted armed struggle in its quest for liberation. Massacres by colonial forces in the towns of Río Piedras and Ponce in the 1930s were followed by an island-wide insurrection in 1950. The government crushed the uprising, declared martial law and expanded its persecution of the independence movement as the vote to ratify the Estado Libre Asociado approached.

On 1 March 1954, four Puerto Rican nationalists attacked the US Capitol, opening fire on representatives while they were discussing an immigration bill, injuring five people. The shooting cast a long shadow over discussions about independence, intensifying existing taboos regarding armed struggle in Puerto Rico. Conversations around violent resistance became rare even among pro-independence organisations.

From the mid to late 20th century the Estado Libre Asociado was able to bolster limited socioeconomic mobility through industrialisation and the expansion of public education. The annexationist New Progressive Party, founded in 1967, and the pro-Estado Libre Asociado Popular Democratic Party, founded in 1938, established a two-party dynamic with enough support to swap Puerto Rico’s governorship and legislature back and forth between them. Elections drew high levels of participation and those left behind by the Estado Libre Asociado’s limited accomplishments could migrate to the US in search of better opportunities. Indeed, Puerto Rico’s economic growth during the late 20th century occurred as the government established programmes that sponsored migration to the US.

But in 2006 the government was plunged into crisis after it ran out of funds, resulting in a two-week shutdown. The collective loss of faith in the Estado Libre Asociado project that followed caused many Puerto Ricans to disengage from politics.

It is unlikely that the Puerto Rico Status Act will make it out of committee hearings in the US Congress. Though there was Republican representation in the bill’s drafting, the minority leader Bruce Westerman has made it clear that the Republican Party has no intention of changing its long-standing opposition to statehood for US territories. Some have also raised the possibility of eliminating the binding plebiscite from the Puerto Rico Status Act, making its effects symbolic yet again.

What’s in it for US?

Puerto Rico’s current situation benefits the US, which reaps billions of dollars by taxing imports to the island. American elites have begun settling in Puerto Rico to avoid federal income taxes. While exchanges on Puerto Rico’s political status are beginning to attract more media attention, it is very unlikely that authorities will change a dynamic that benefits the most powerful.

The Estado Libre Asociado lost a substantial portion of its powers with the imposition of the Puerto Rico Oversight, Management, and Economic Stability Act in 2016. Most economic policy is now controlled by the Financial Oversight and Management Board, a group of unelected officials appointed by the US president. Consequently, Puerto Ricans have grown apathetic towards elections. Voter turnout is decreasing, even as the annexationist-pro Estado Libre Asociado’s two-party dominance is being challenged by the emergence  of new minority parties which seek to upset the status quo.

Federal bills linked to Puerto Rico’s relationship with the US have always been designed to achieve specific political goals. Yet though political status is the most crucial factor shaping Puerto Rico’s future, the reality of daily life on the island was summed up by the band Fiel a la Vega: most Puerto Ricans ‘live to survive’. Some parts of the island face daily blackouts and water shortages, tariffs make groceries and other goods far more expensive than on the mainland, government negligence shows in roads and buildings and the majority of the jobs that are available are underpaid. Living in Puerto Rico is an act of everyday resistance. 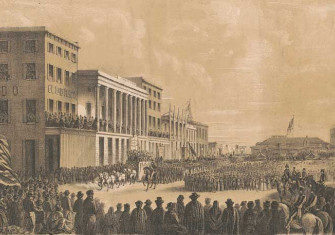 California becomes a State of the Union 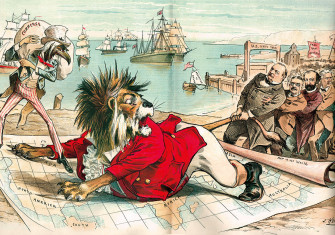