California becomes a State of the Union

California became the thirty-first state of the United States on September 9th, 1850. 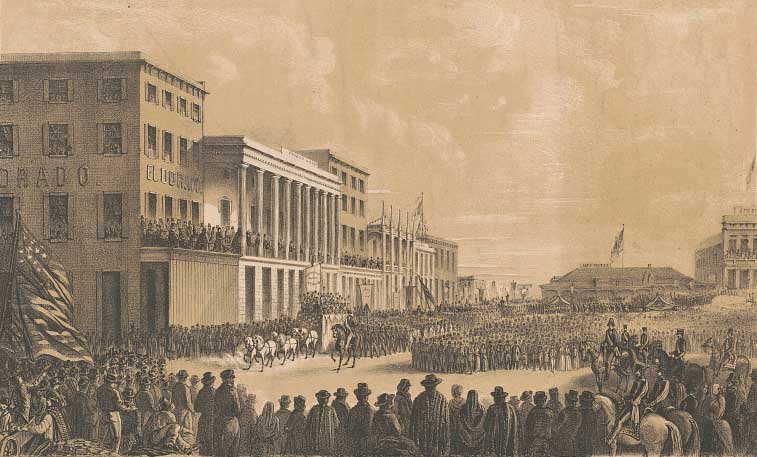 Wild celebrations erupted in Washington DC on Saturday, September 7th 1850, when the Bill which made California the thirty-first state of the United States was passed by the House of Representatives. President Millard Fillmore would sign it into law on Monday. Cannon boomed, bands played, fireworks exploded and oratory and drink both flowed in liberal quantities. The issue had blown up after the discovery of gold near Sacramento early in 1848 - a few days before the Mexico ceded the territory to the United States. At that time California had a white population of under 7,000. The lure of gold, however, drew a horde of prospectors and other immigrants in numbers which exceeded the figure of 60,000 required to become a state. They now demanded to accede to the Union.

The problem was that there were no slaves in California, and white miners did not want black slaves to be used to undercut them as labour in the diggings. Two senators from California would tilt the balance of power in the Senate against the slave-owning South, and the House of Representatives already had a substantial majority of members from non-slavery states. Southern politicians rose in wrath to demand that the South should secede from the Union, but Senator Henry Clay of Kentucky intervened. A slave-owner himself, he disapproved of the institution and was as devoted to the Union as he was to whiskey and cards. He devised a compromise which offered, he told the Senate on January 29th, 1850, ‘an amicable arrangement of all questions in controversy between the free and the slave states, growing out of the question of slavery’. The Clay ‘Omnibus Bill’ covered California, the future of New Mexico and Utah, slavery in Washington DC itself and fugitive slaves in the North. It gained the support of the administration and of Senator Daniel Webster of Massachusetts in a speech on March 7th (‘I wish to speak today, not as a Massachusetts man, nor as a northern man, but as an American’), which infuriated his anti-slavery constituents. Foot-dragging and interminable and sometimes furious debate - at one moment Senator Foote of Mississippi advanced on Senator Benton of Missouri with pistol drawn - went on until the compromise was defeated in the Senate on July 31st.

Clay withdrew from Washington and what was to be called the Compromise of 1850 was finessed through, not by the voices of high principle but by a master of smoke-filled-room politics, Senator Stephen A. Douglas of Illinois. Douglas divided Clay’s bill into eight separate measures, so senators could take different positions on different matters. He then steered the measures through, by sheer persistence and adroit use of procedure combined with judicious nods, winks and deals connected with the building of railroads and the sale of government bonds.

Douglas told the Senate that, ‘These measures are right in themselves and collectively constitute one grand scheme of conciliation and adjustment - The North has not surrendered to the South, nor has the South made any humiliating concessions to the North.’ President Fillmore called the Compromise of 1850 ‘final and irrevocable’ and it was greeted not only with rejoicing in Washington, but with profound relief everywhere in the United States in the belief that conflict between North and South was now at an end. This belief proved tragically mistaken. The issue of principle over slavery had not been settled, and in the Civil War California was to be a substantial asset to the North.