Battle of the Nile

The battle between the British Navy and that of the French Republic took place on August 1st, 1798. 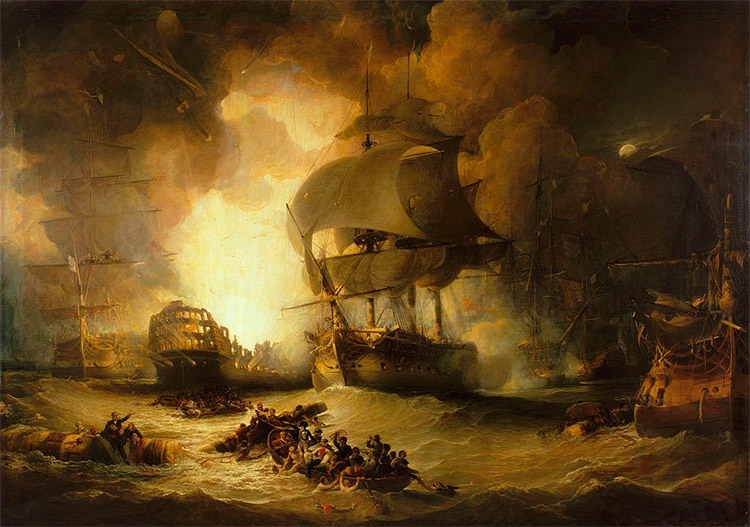 The battle which, more than any other, established Horatio Nelson’s fame began as the sun set on August 1st, 1798, over a French fleet of seventeen ships. Fifteen miles east of Alexandria and close to the Rosetta mouth of the Nile, anchored in line across Aboukir Bay on the Egyptian coast, they were in a strong and carefully selected defensive position, close inshore and protected by shoals and a shore battery on an island. Nelson had found them there after weeks of anxiously searching the Mediterranean.

At thirty-nine, Rear Admiral Sir Horatio Nelson’s keenness for action, rapidity of judgement and eye for an opportunity were unequalled, as was his capacity to inspire his subordinates. ‘I had the happiness to command a band of brothers,’ he wrote to Lord Howe afterwards, ‘therefore, night was to my advantage.’

Not a moment was lost as the British fleet approached Aboukir Bay from the north-west at about 5.30pm. The French commander assumed they would not attack so late, but the wind was blowing directly along the French line and Nelson’s fourteen battleships divided into two groups. One group sailed along the outside of the French line, while the other, led by Captain Hood in Zealous and Captain Foley in Goliath, snaked through a narrow gap between the foremost French ship and the shore. The French were caught napping and were attacked from close quarters on both sides simultaneously in a wildly unorthodox and effective Nelsonian manoeuvre. The Culloden ran aground on the shoals, but the thirteen other English ships fell on the first eight of the French.

The firing began at 6.28pm and by 7 o’clock it was so dark that the British ships hoisted a row of white lamps at the mizzen peak so that they could distinguish each other from the enemy. The Bellerophon under Captain Darby was dismasted and almost wrecked by a colossal broadside from the huge French flagship L’Orient of 120 guns, but the attack was continued and the French ship caught fire soon after nine and blew up at 10.05, by which time six other French battleships had surrendered. In the end only two French ships of the line and two frigates were able to get away. Nelson himself, in Vanguard, was struck in the forehead by a piece of shrapnel and temporarily blinded by a flap of skin which dropped over his one good eye. It was quickly stitched by the surgeon and he resumed command.

On the 15th, Nelson sent seven of his ships with six enemy prizes to Gibraltar and himself made for Naples (where he was fatefully to meet Lady Hamilton). The news of the action was received with delight in England and the victor was raised to the peerage as Baron Nelson of the Nile. Parliament voted him a pension, the City of London presented him with a sword, the East India Company gave him £10,000 (equivalent to £5 million or so today) and the Sublime Porte conferred on him the Order of the Crescent with a superb aigrette or ‘plume of triumph’. Napoleon’s army in Egypt was left stranded, cut off from France, and eventually could only tamely surrender, and French designs on India were thwarted.