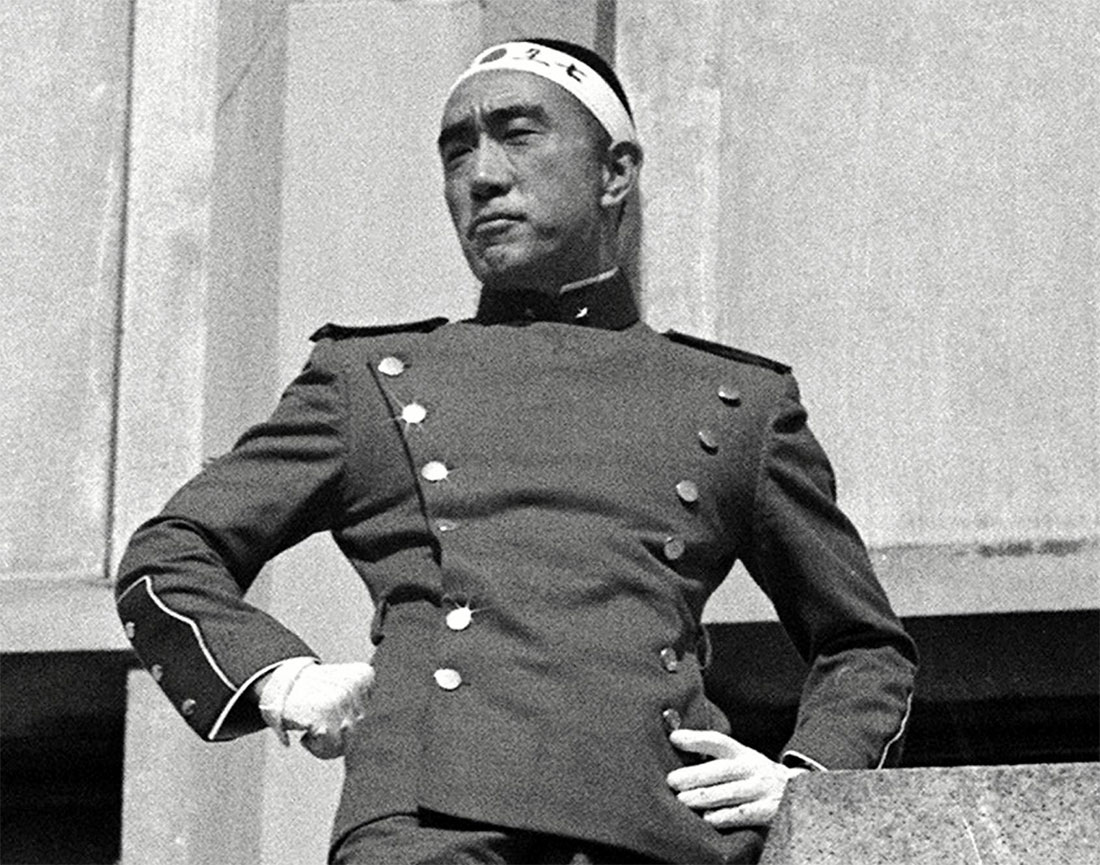 Early on the morning of November 25th, 1970, Yukio Mishima put the finishing touches to his novel The Decay of the Angel, at his home in Tokyo. Carefully setting the manuscript aside, he then went to bathe and dress. He had chosen his clothes carefully: a brown uniform of his own design, a hachimaki (stylised headband) and a pair of white gloves. Once he was satisfied with his appearance, he picked up his sword and left the house. Together with four young members of the ‘Shield Society’ (a private army he had founded a few years earlier), he marched to the Ichigaya barracks, the eastern headquarters of Japan’s Self-Defence Forces, where he had an appointment with the commandant, General Kanetoshi Mashita. Once admitted to Mashita’s office, they immediately took him hostage and barricaded the door. They demanded that all the soldiers on the base assemble in front of the building. By noon, the troops (and members of the press) were there. Mishima strode out on to the balcony and began to speak. Attacking the ‘spinelessness’ of Japan’s postwar constitution, he urged the soldiers to rise up in rebellion. But his words were drowned out by the jeering of the crowd. After seven minutes, Mishima gave up. There would be no coup d’état. He went back inside. Calmly sitting on the floor, he pulled out his sword and drove it into his abdomen. As he slumped forward, one of his friends, Masakatsu Morita, went to complete the seppuku ritual by cutting Mishima’s head off. But Morita failed. When he, too, had disembowelled himself, another accomplice, Hiroyasu Koga, stepped forward and beheaded Mishima instead.

Mishima’s suicide was as much about history as it was about politics. Despite his success as a writer (Mishima was nominated three times for the Nobel Prize), he had always felt alienated from modern Japanese society. Born into an old samurai family, he had been taught to revere bushido (‘the way of the warrior’), with its emphasis on honour, courage and selflessness. Yet even as a child he had recognised that the days of the samurai were over. Since the Meiji Restoration (1868), which brought an end to the Shogunate, all that had been swept away. Japan had opened up; it had modernised; and its military had been reformed along western lines. It had won some impressive victories over the following decades, defeating the Russian navy at the Battle of Tsushima (1905) and wrestling Manchuria from Chinese rule (1931). Even Mishima was caught up in the resulting tide of patriotic fervour. Although declared unfit for service, he had longed to join the army during the Second World War and always regretted not dying for his emperor in battle. He believed, nevertheless, that the true Japanese spirit – the spirit of the samurai – had been lost. In its place, a culture of selfishness and materialism had taken hold. As time went on, it only got worse. The Japanese surrender (August 15th, 1945), the emperor’s repudiation of his divinity (January 1st, 1946), the renunciation of war (May 3rd, 1947) and the assimilation of American habits all testified to the bankruptcy of the Japanese soul.

Several of Mishima’s early works explored his sense of cultural estrangement. In his semi-autobiographical novel Confessions of a Mask (1949) he told the story of Kochan, a small and physically weak boy who struggles to fit into prewar Japanese society. Obsessed with masculinity, death and honour, and tormented by latent homosexual desires, he develops a false personality to conceal his ‘true’ self from the world.

By the early 1960s, however, Mishima’s seclusion had given way to a desire to resist modernity more actively. In The Sailor Who Fell from Grace with the Sea (1963), he examined the alienation of the young Noburu Kuroda from the corrupt, western ways of his mother. At first, he sees hope in his mother’s new lover, the sailor Ryuki Tsukazaki, who appears as an embodiment of selfless heroism. But when he learns that Ryuki is going to abandon the sea to marry his mother, Noburu and his friends decide to kill him.

This mentality underpinned Mishima’s attempted coup. In the manifesto he had prepared a few days earlier, he related how he and his fellow conspirators had ‘watched Japan become drunk on prosperity and fall into an emptiness of the spirit’. Believing that only in the military ‘was the real Japan … the true spirit of the samurai preserved’, they had resolved to ‘awaken’ the troops and put an end to decline.

It would, however, be a mistake to suggest that Mishima wanted merely to restore the past. Much as he admired bushido, he knew that the samurai were rooted in the historical conditions that had prevailed during the Edo period (1603-1868). Even though it might be salutary to study their ways, he argued, ‘learning from history should never mean fastening on a particular aspect of a particular era and using it as a model to reform a particular aspect of the present’.

Instead, Mishima wished to bring about a spiritual re-awakening that would help the Japanese transcend their recent history. Although the samurai, as a warrior class, had emerged from specific (unrepeatable) historical circumstances, Mishima recognised that bushido had developed out of a timeless set of spiritual beliefs. These had their origins in Buddhism. Following its ‘official’ introduction to Japan in 552, Buddhism had been combined with the indigenous Japanese folk religion (Shinto). After the Meiji restoration, however, Buddhism was denigrated as a ‘foreign’ importation and formally separated from Shinto, which was transformed into an instrument of state policy. In Mishima’s opinion, this separation was the underlying reason for Japan’s woes. By extension, a rediscovery of Buddhism was the key to its salvation.

Mishima dramatised what he felt was required in his Sea of Fertility tetralogy. Spanning the period 1912-70, it follows the spiritual journey of Shigekuni Honda as he passes through the upheavals of Japan’s recent history. At its heart is an exploration of Buddhist doctrine. The starting point is the belief that everything in the world is shifting and impermanent. As such, any attempt to find lasting happiness or satisfaction in it is doomed to failure. Despite this, human beings keep striving after it all the same. This fruitless longing – which takes the form of sensual desire, ego-driven anger or pleasure-seeking ignorance – produces actions (karma) that result in a renewed existence. In turn, this leads to a painful cycle of death and rebirth (samsara). By awakening to the illusory nature of the world and apprehending the truth of samsara, one could follow the path of righteousness and break free of the cycle. In doing so, one would attain nirvana, a state of perfect bliss, where time has no meaning.

Honda has studied this since his youth and knows the theory inside out. But it is only by observing samsara for himself that he grasps its meaning. Over the course of the first three novels – Spring Snow (1968), Runaway Horses (1970) and The Temple of Dawn (1970) – he witnesses the reincarnation of his childhood friend, Kiyoaki Matsugae, first as a right-wing revolutionary, then as a Thai princess. In turn, they manifest the three types of fruitless longing (lust, anger and ignorance); and they each die unsatisfied at the age of 20. But when, in The Decay of the Angel, Honda encounters the princess’ reincarnation – a teenager named Toru – the importance of samsara finally dawns on him. Hoping to break the cycle, he adopts Toru. If he can help the boy live beyond 20, he thinks, all would be well. But Toru is cruel and Honda begins to lose faith. One day, however, Toru swallows poison. He survives, but loses his sight and withdraws from the world. Honda suddenly remembers that this is how Buddhist literature describes the death of an angel. All becomes clear. He finally understands samsara and sees the illusions of the world for what they are. He knows that he, too, must turn away from them. Forsaking the self, he is ready to die – confident that nirvana awaits.

It was to this that Mishima tried to ‘awaken’ the Ichigaya garrison. If they embraced the Buddhist truths that had underpinned bushido, he reasoned, they would embrace selflessness rather than indulgence, death rather than life. They would be ready to elevate Japan above its recent history. But Mishima was indifferent to his failure. Having apprehended these truths himself, he had conquered his selfhood and was prepared for death. As his head was struck from his body, he – like Honda – entered ‘a place that had no memories, nothing’. 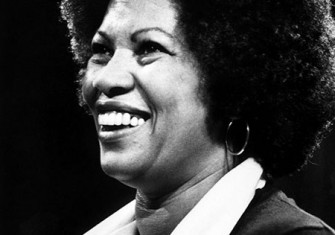 Portrait of the Author as a Historian: Toni Morrison 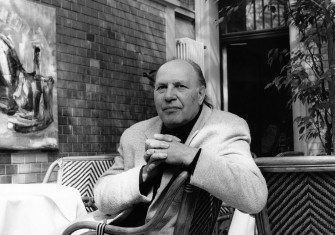