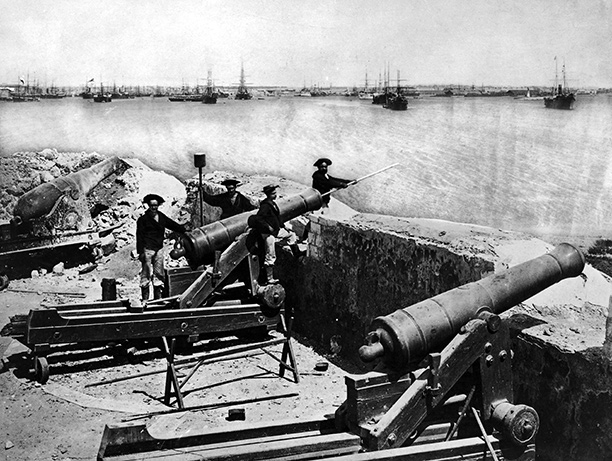 British sailors on a run ashore inspect the damage they have inflicted at Fort Mex, part of the defences of Alexandria in Egypt, on July 11th, 1882. As they pretend to load or sponge out the barrel of a gun, the tars are identifiable by their broad-brimmed straw hats, while some of the British fleet can be seen in the background.

How had Admiral Sir Beauchamp Seymour come to give the order to open fire? It all went back to the huge increase in the price that could be got for Egyptian cotton in the early 1860s, when supplies from the southern states of America were disrupted by civil war. The Khedive Ismail, ruler of Egypt as the Sultan of Turkey’s nominal viceroy, unfortunately ignored the end of the war in 1865 and went on spending as if his cotton receipts were as before, while the bankers moved in. By 1875 he owed so much to his foreign creditors that he had to sell his Suez Canal shares to Disraeli, the Tory prime minister, for £4 million. The French, although bitter over this coup, administered the country jointly with Britain to ensure that the servicing of the Egyptian debt was not interrupted, while Ismail was replaced by his son Tawfik in 1879. Nationalist, mixed with Islamist, feelings were stirred up and a Colonel Urabi emerged as the most important figure. Soon Gladstone, Disraeli’s successor, was forced to confront the possibility of having to intervene, pushed by the French, still sensitive after their defeat by the Prussians in 1870 and by the Whig element in his Liberal Party, which did not share his wish for an ‘ethical foreign policy’. The threat of intervention crystallised nationalist feelings in Egypt and in mid-May Gladstone ordered the fleet to sail for Alexandria, where it was joined by French warships.

On June 10th anti-foreign rioting broke out in Alexandria, with the city police some of the worst offenders. British civilians and sailors were among the 50 or so killed. The sultan refused to intervene, while the French suddenly refused to join in punitive action for fear of reactions in their Arab colonies. The threat presented to the Suez Canal, however, drove Gladstone on and when a 24-hour ultimatum to Urabi to surrender was ignored, Seymour gave the order for the first fleet action since 1855. Designed to resist cannon fire, the batteries were pulverised by the British shells. The inhabitants meanwhile burnt the city’s European quarters and much else, while Urabi remained defiant.

Sir Garnet Wolseley, commander of the Anglo-Indian force about to invade Egypt and finish the job, regarded the bombardment by the ‘Swell of the Ocean’, his nickname for the nattily dressed Seymour, as ‘criminal’, not least because it led to Urabi strongly fortifying the route from Alexandria to Cairo. This meant Wolseley had to mount his attack from the Suez Canal. Luckily Urabi believed Ferdinand de Lesseps, its builder, when he said Britain would observe the canal’s neutrality. The Egyptians were routed at Tel el Kebir on September 13th after a daring night advance by Wolseley and Cairo surrendered by the evening of the same day. There was no annexation; instead Evelyn Baring, who had been British Commissioner of the Egyptian Debt, returned as ‘consul’, though in effect viceroy. Lord Cromer, as he became, ran the country behind the façade of the khedive, thus preserving Gladstone’s liberal conscience as well as some features, if not the entire face, of Sultan Abdul Hamid in Constantinople.