Before and After the Volcano Blows

A new exhibition at the British Museum on the aftermath of the eruption of Vesuvius in AD79 raises questions about the relationship between past and present, says Daisy Dunn. 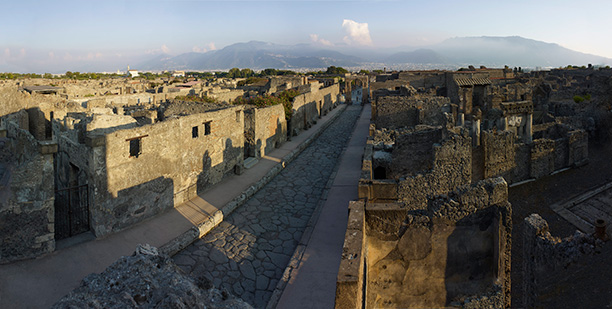 Even in the face of death we like to think we’re invincible. In AD79 Vesuvius swallowed up the towns of Herculaneum and Pompeii, incarcerating thousands of lives in hot ash and mud. It could blow again at any time. Still, we can look at the preserved Vesuvian corpses in the British Museum’s new exhibition with fascination rather than horror. One might as well be viewing art inspired by some remote and mythical occurrence.

The three million or so residents who live within striking distance of Vesuvius today are prey to the same blurred vision. The prospect of a catastrophic eruption in their lifetime feels like the stuff of Hollywood, not reality. Easier to picture Ian McKellen as Pliny the Elder, doddering about the place as lava sizzles, than one’s own family piling into people carriers to escape Naples along the A3.

A decade ago financial schemes initiated by civil authorities to persuade 600,000 people to relocate from the 18 towns most at risk from pyroclastic flows – the so-called ‘red zone’ of Vesuvius – subsequently met with limited success.

It is hard to blame those who continue to stay put. The sight of local mafia groups among others occupying the homes of those who flee must help to justify the ‘come what may’ attitude of those who stay. For today, as in AD79, the tendency is, perversely, to seek explanations only after disasters strike.

The ancients would at least have had some excuse for shuddering belatedly at the fact that the eruption, according to traditional readings of Pliny’s account, had begun on August 24th, the feast day of Vulcan. In ancient myth Vulcan was the god of fire and several authors located his forge – that hothouse of industry where he welded and polished and inspired fine works with divine powers – in volcanic bowels. Those who escaped the eruption of AD79 had never seen it erupt before; it would have been natural for them to blame divine vengeance.

Given the timing of Vesuvius’ most serious recent eruption, in the crisis-ridden March of 1944, it is not surprising that modern onlookers also sought a divine explanation. The spewing of lava that would kill 26 and shatter dozens of aircraft mid-air came when the Allies were seeking to break through to Rome to prevent German forces in Italy from reinforcing other fronts; the third battle of Monte Cassino had only just begun. As ash rained down onto a nearby monastery, Paul Gobine, a Seychellian NCO serving with the British Pioneer Corps, was one of many who witnessed soldiers seek an explanation in God’s curse for the war they waged. Others had suspected a connection between the eruption and Allied bombing raids in the area, though no evidence was adduced to prove that they had ever intended to target Vesuvius’ crater.

Scoff as we may at the Mayan Calendar predictions for last year, if we must seek explanations for disasters in terms of coincidence, divine vengeance, fate – and it is human to do so – then it may be better to search for them before they happen, not afterwards. Prediction makes better sense than explanation. The chances of such predictions proving accurate and thereby saving lives are slim, but they may help hit home just how real the threat of Vesuvius is.

For regardless of the (apparently pathetic) evacuation plans currently in place, history suggests that, in the event of another eruption, those in sight of Vesuvius would experience the same ‘art not life’ reaction as we do when we look at the remains of AD79 in the British Museum. Wonder and foolhardiness would, in that moment, overcome fear.

Pliny the Elder famously boarded a boat to get closer to the monster in AD79, reassuring his nephew, Pliny the Younger, that ‘fortune assists the courageous’. The words rang true in 1944, when soldiers wrote diary accounts about their attempts to inch closer to Vesuvius to witness the eruption in all its dramatic glory. It was another case of man reading life as art.

Perhaps the only way to contemplate the real potential of an eruption occurring any time soon is to accept that predictions are never so ridiculous as after the event. A prediction now of a light eruption to coincide with Berlusconi’s final ‘bunga bunga boom boom’ might well satisfy our timeless lust for dubious explanations.

Life and Death: Pompeii and Herculaneum is on at the British Museum, London from March 28th until September 29th.