Alexander I succeeds as King of Scots

Alexander I succeeded his father Malcolm Canmore, Macbeth's killer, as King of Scots on January 8th, 1107. 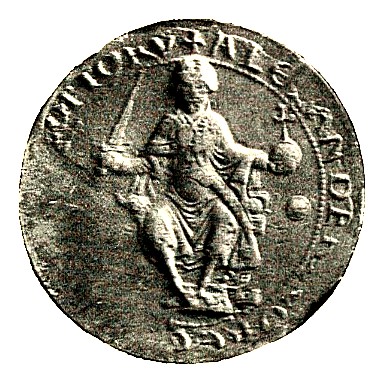 The first of the three Scottish kings named Alexander was one of the many sons of Malcolm Canmore, Macbeth’s killer, and his second wife, the saintly Queen Margaret. A pious Anglo-Saxon princess, who arrived in Scotland with a great deal of money and a piece of the True Cross, she decided to bring the benefits of Roman Catholic Christianity and English civilization to Scotland as well.

Though Malcolm Canmore was from the old Celtic royal line, he was sufficiently smitten to let his wife give their children English names. The eldest boy was named Edward, after her father, and another was called Edgar after her brother. The fifth son, Alexander, was apparently named after either Pope Alexander II or Alexander the Great and the youngest, David, after either the Welsh saint or the Old Testament King David.

Malcolm Canmore was killed in Northumbria when he went raiding into England once too often, in 1093. The eldest son, Edward, was killed with him and when Queen Margaret died in Edinburgh three days later there was so strong a reaction in Scotland against her Anglicizing influence that her younger sons fled to England, leaving Malcolm’s brother Donald as King of Scots. William Rufus saw an opportunity and in 1095, when Edgar would have been in his late teens, he was declared King of Scots as Rufus’s vassal. An army under his English uncle and namesake, Edgar Atheling, restored him to Scotland in 1097.

Edgar, who was described by a chronicler as a sweet and lovable character, died in Edinburgh in 1107. He seems never to have married and he left no children, so he was succeeded by Alexander, who was perhaps in his middle to late twenties. Soon after his accession to the throne, Henry I of England gave his bastard daughter Sibylla to Alexander as his queen. According to William of Malmesbury, she was deficient in modesty and refinement.

Alexander was not sweet and lovable. During a reign of seventeen years he continued his mother’s modernizing policies and supported the Roman Catholic Church as an alternative to the Scottish Celtic Church, while managing to keep the English from taking over Scotland. The sadly unrefined Sibylla died in 1122 and Alexander died at Stirling two years later. He left no legitimate children and was succeeded by his brother David, who continued the policies which were bringing Scotland closer to the European mainstream.