Arabic was not just spread by the sword, but by merchants, patron-hunting poets and dowry-seeking princes. 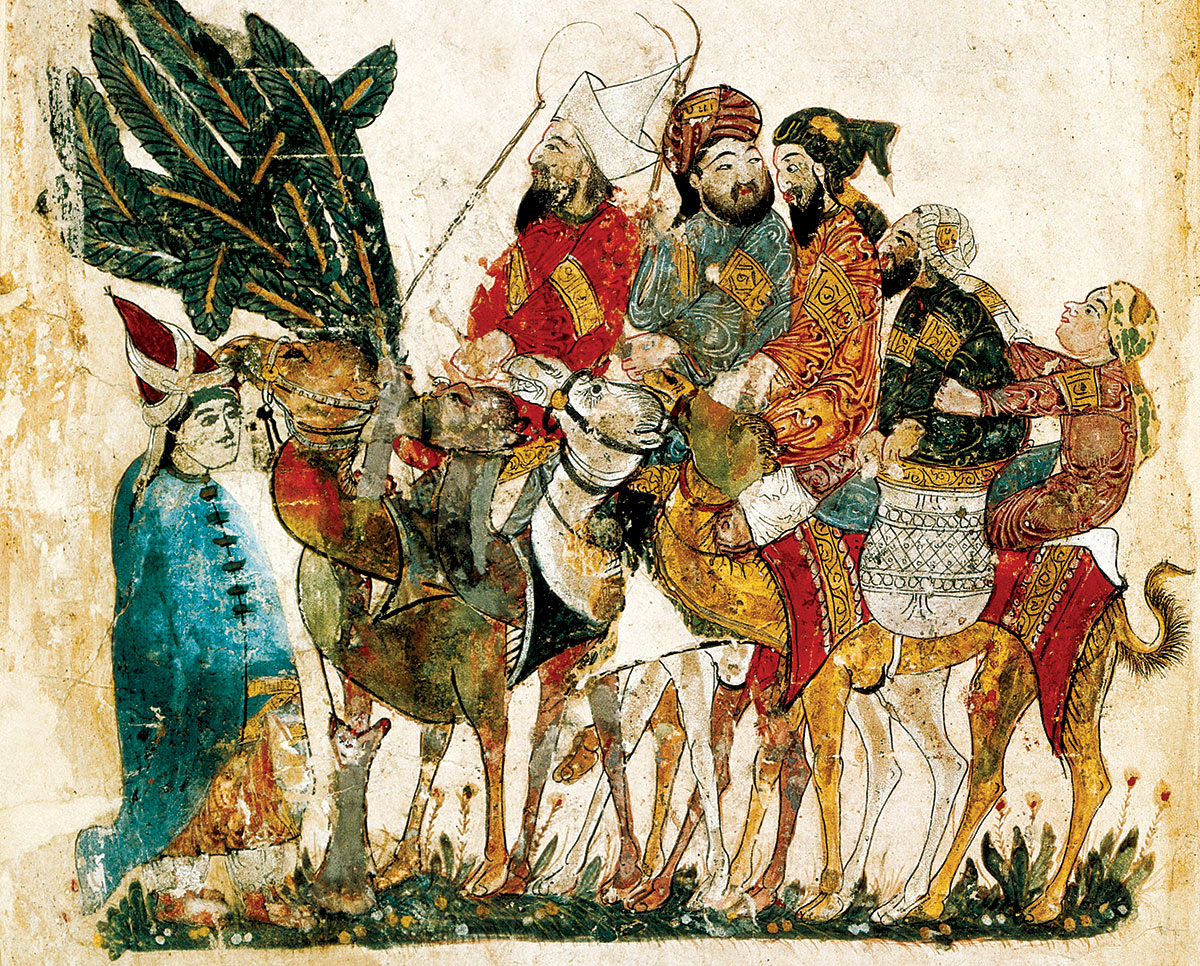 Arabs is a dazzling achievement, born of a historian’s passionate affection for his subject. It is a labour of love, achieved after a lifetime spent in Arabia, running simultaneously on two tracks: a grand narrative of Arab history interwoven with a study of the evolution and spread of the Arabic language. So, as well as hearing the tales of such brilliant political operators as the first Umayyad caliph Muawiyah and the brutal al-Hajjaj, we also follow many lesser known tracks across the Arabian lands. For Arabic was not just spread by the sword, but accompanied the bales of merchants, the purse of patron-hunting poets and the baggage train of dowry-seeking princes as it made its way across the Sahara to West Africa, or – transmuted into Swahili – infiltrates East Africa and peacefully enriches the Indonesian and Malay languages with thousands of loan words. There are 4,000 Arabic words embedded in Spanish and it even pops up in such innately English sounds as ‘tally-ho’.

Tim Mackintosh-Smith has lived in the ancient capital city of Yemen for some 30 years, in a narrow tower house close to the courtyard where Imam Ali first stabled his camel when he came to Sana’a as a missionary on behalf of his cousin and father-in-law, the Prophet Muhammad. On a nearby summit stands one of the earliest surviving mosques in the entire Muslim world, which guards some of the oldest textual fragments of the Quran in existence.

But Mackintosh-Smith is not just immersed in this history; he has been endangered by it. Alongside his fellow citizens of Sana’a, he has witnessed the violence and individual tragedies of three Yemeni civil wars, evidence of which is sadly etched in the book’s dedication. The fighting, which continues today, has effectively confined him to the safety of his immediate streets for the last four years. But perhaps without this unwanted neighbourhood arrest, he would never have completed this vast undertaking, which combines 3,000 years of narrative history of the Arabian peninsula with the fate of dozens of international Arab-ruled empires while simultaneously chronicling the spread of language and dialects. I found myself making comparisons with Braudel, working on his history of the late medieval Mediterranean through the dark days of the Second World War, though Mackintosh-Smith combines this with the all-encompassing and recklessly discursive enthusiasm of a Herodotus and an Al-Masudi.

Tim Mackintosh-Smith is empowered by a pyrotechnical enthusiasm for the Arabic language and its innovative practitioners. One of the glories of this handsome blue and gold volume is that it is littered with pocket-sized original translations (like an eclectic, stamp-album of words) so that we get to experience the energy of 3,000 years through the intimacy of verbal puns, graffiti, backstreet gossip and the cries of the mob, as well as carefully crafted and immortal odes.

Mackintosh-Smith’s house, which has been rocked by the blast of rockets, is also besieged by the simplistic rhetoric by which school children are taught to hate an imagined enemy. These chants are reminiscent of a hate session in 1984 or the mournful sound of the sheep being taught to bleat, ‘Four legs good, two legs better’ in Animal Farm. This is a haunting, underlying refrain repeated throughout the book: be aware of the power of words and beware how those in power use words. For as Mackintosh-Smith explains, the Arabs are a people who can only be defined by their language. There is no pure ethnic identity, for they were a cocktail of Middle Eastern peoples formed by a language which evolved in a desert sanctuary. The Arabs remain enchanted by their language in a way that no one in the West can really understand. Arab audiences will still pack out an entire football stadium to listen to the quavering voice of an old poet, but they are also hard-wired to appreciate rhetorical flair as a vital dimension of political leadership.

It is on this delicate knife-edge between the impact of language and political history that Mackintosh-Smith is at his most original and innovative as a historian. I have read dozens of narrative histories of the Arabs, but I have never felt so transported, so entertained and so immersed. In his telling, the emergence of Islam is no more than a halfway point in the historical record of the Arabs, rather than forming the explosive beginning of all things. He also excavates a number of the fundamental dualities within Arab civilisation: the endless conflict between Badawi and Hadhari, between tent-dwelling nomad herdsmen and the house-dwelling urban citizen, between the inventive oral language and the literate society that will record these verbal fireworks, between the genealogical fiction of a tribe (Qabilah) and the palace-centred lands of a people (Sha’b). He knows how this duality also looks outwards to use language as a label of identity: those who can understand us (Arabi) are with us, those who cannot (Ajami) are potential enemies, to be feared and preyed upon, but who also define us.

Mackintosh-Smith constructs a scenario for the likely origins of Arabic language, emerging from the desert, a borderland refuge formed by refugees from two arcs of civilisation, the Fertile Crescent and the mountain kingdoms of Arabia Felix. So there is an additional north-south, Syria versus Yemen duality also embedded in Arabic thought right from the start. The original Arabic culture intentionally embraced freedom over reliable sources of food. For, as the Assyrians wrote with horror at their first encounter with these anarchic people of the desert, the Arabs knew ‘neither overseers nor officials’. This freedom was enabled by the mobility of the camel (to be augmented a thousand years later by the arrival of the horse, then the Toyota land cruiser and mobile phone). It was a culture that intensely relished the excitement of the desert raid and delighted in descriptions of the beloved, be it camel, horse, woman, or a list of ancestors. It was a highly disparate population, that could only be drawn together to act as one people, to be briefly united in either defence or attack, by the power of words, by a voluntary submission to a poet speaking with the authority of a priest.

This sort of understanding allows us to engage with the fascinating narrative of 3,000 years of Arab coups, conquests and courts. He helps us to understand why it is that calligraphy is the essential art form of the Arabs (what sculpture is to ancient Greece), enhanced by their early love affair with paper. And why Arabic, for all its flexibility and vivacity, could not marry with the 15th-century revolution in print technology (explained in a chapter of genius-like concision) and how it would become undermined by the esteem of High Arabic, effectively suffocating dozens of regional dialects. Then stir in the history of Turks, Persians, Mongols, Ottomans, the colonial empires of France and Britain, oil, Israel and the Cold War to achieve the horrific political reality of the modern Arab world. A place where five per cent of humanity achieves 58 per cent of its refugees and 68 per cent of its battle casualties.

Barnaby Rogerson’s most recent book is In Search of North Africa: A History in Six Lives (Haus, 2018). He is publisher at Eland Books.