A translator alters more than a text’s language, turning the process into a political statement. 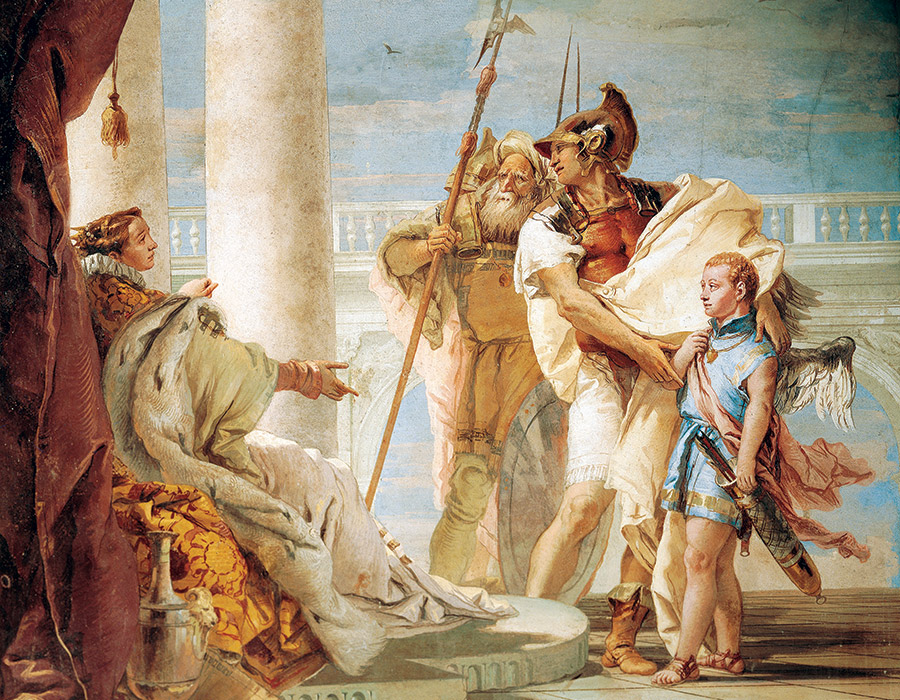 ‘Historically, men translated the Odyssey. Here’s what happened when a woman took the job.’ So begins one of many recent articles on Emily Wilson’s new translation of Homer’s Odyssey, the first in English published by a woman. In the wake of Wilson’s groundbreaking translation, there has been much buzz about how women have been making the Greek and Roman classics their own in recent years. This scholarly and creative outburst includes translations by Susanna Braund, Diane Arnson Svarlien and Sarah Ruden, as well as Margaret Atwood’s Penelopiad (2005) and Ursula K. Le Guin’s Lavinia (2008), adaptations of Homer and Virgil centred around feminine protagonists and perspectives. These works are part of a rich tradition of reworkings of the classics by women, which includes Hélisenne de Crenne’s translation of Virgil’s Aeneid.

In the 16th century, Marguerite Briet translated the first four books (out of 12) of the Aeneid into French prose under her pseudonym, Hélisenne de Crenne.

The Aeneid is a Latin epic poem composed during the reign of Augustus (published upon Virgil’s death in 19 BC), which celebrates Roman political growth and empire. The poem follows the hero Aeneas, who, compelled by fate in the aftermath of the Trojan War, leads the surviving Trojans on a voyage to Italy, fights a war against native tribes, marries into the local royalty and helps establish a settlement that would one day become Rome.

In her own day, Hélisenne (most scholars refer to her by her forename) was a successful novelist and epistolary writer. Today, however, her Aeneid (Les Quatre premiers livres des Eneydes du treselegant poete Virgile, Traduictz de Latin en prose Françoyse, 1541) is little known and less read (only three manuscripts are known to survive), despite marking a vitally important moment in feminism, translation and the classics. As Diane S. Wood argues, the author was ‘a woman on the cutting edge of her era who both exploited and innovated literary tradition’; through her writing, Hélisenne positioned herself as a learned and non-compliant virago – a female warrior – and ‘attempted to achieve parity for her gender’ in a radically patriarchal age.

By translating only the first four books of the Aeneid, Hélisenne produced not an incomplete translation, but a radical intervention upon Virgil’s epic. In this way, she anticipates Alice Oswald’s Memorial (2011), which strips Homer’s Iliad down to only its deaths and similes. (Oswald suggests her poem is more ‘excavation’ than translation.)

Hélisenne’s pen name adapts Elissa, the Phoenician name of Dido, signalling her deep interest and personal investment in the queen of Carthage. This relationship is sustained throughout Hélisenne’s work: in her novel Les Angoisses douloureuses qui procèdent d’amours (‘The Torments of Love’, 1538) Hélisenne calls her female protagonist by the same name. In Virgil’s poem, Dido offers help to Aeneas, falls in love with the hero and believes her love reciprocated. In Virgil, the gods compel Aeneas to leave Dido and Carthage to sail to Italy. Dido claims that Aeneas has married her, which Aeneas denies. Aeneas readies his fleet and sneaks off in the middle of the night. When Dido sees his fleet in the distance, she is distraught and commits suicide upon her own funeral pyre: in Hélisenne’s French, avec les vents s’envola sa jeune vie (‘her young life flew away with the winds’). Thus closes Virgil’s fourth book and Hélisenne’s Eneydes.

By cutting off her narrative here, Hélisenne’s Aeneid concludes with Dido’s abandonment and suicide, erasing Aeneas’ later triumphs and Rome’s imperial destiny from the text. Aeneas becomes ‘a feckless and manipulative lover’, in the words of Sharon Marshall, a scholar of Hélisenne, and ‘Hélisenne challenges Virgil’s presentation of the hero’.

In Hélisenne’s hands, the Aeneid becomes not a celebration of Roman nationalism but a feminist tale of tragic romance and male perfidy, which addresses the victimisation of women. In Hélisenne’s translation, for instance, jeune vie (‘young life’) goes beyond Virgil’s simpler vita (‘life’) to emphasise the tragic pathos of the heroine’s life interrupted in its prime. Hélisenne conditions her readers to sympathise with Dido and ‘the much prolonged suffering of the unfortunate woman’ (la trop longue peine e l’infoelice dame).

In Virgil’s Aeneid, women are frequently an obstacle to or a distraction from the fulfilment of male ambition. In addition to Dido, whose companionship distracts and delays Aeneas from sailing to Italy, there are Creusa (Aeneas’ first wife, whose death during the sack of Troy frees Aeneas to pursue a more politically advantageous marriage), the surviving Trojan women (whom Aeneas abandons in Sicily after, weary from travelling, they set fire to the fleet) and Amata (an Italian queen who incites her people to fight the Trojans rather than grant Aeneas access to power). Hélisenne adapts the same poem to defend women and to contribute to the querelle des femmes (‘the woman question’), a broad cultural debate beginning in the Renaissance about the nature of women and their place in society.

Where Virgil, for example, leaves the issue of Dido’s claim to marriage with Aeneas rather ambiguous, Hélisenne more firmly endorses Dido’s side by having the goddess Juno call the union ‘a legitimate marriage’ (un mariage ligitime) and a ‘perpetual alliance’ (perpetuelle alliance).

The very form of Hélisenne’s translation underscores this; by electing to write in prose with a chapter format rather than in epic verse, Hélisenne turns martial epic – a traditionally masculine genre with deep roots in imperialism – into a work more closely resembling a tragic romantic novel. Moreover, Hélisenne’s French prose is remarkable for its self-conscious Latinity. While she was at times criticised for using ‘words that were obscure and too close to Latin’, these Latinisms showcased her erudition, helping to assert authority for a woman performing a traditionally masculine activity.

Obscure though it may be today, Hélisenne’s Eneydes constitutes a remarkable achievement in Renaissance humanism and the history of feminism. Hélisenne pushed back against the subjugation of women and their bodies and she did so within a classical tradition dominated by men. She did this both with the content of her writing and by the very activity of publishing her work as a woman. Her reworking of Virgil emphasises both the role of gender in translation and the dynamic power of the translator to transform classical texts and to make them her own.