Why Men Fought in the 100 Years War

Patriotism, propaganda, profit - Anthony Tuck finds that these were the motives that led Englishmen to fight in France.

In the middle decades of the fourteenth century, the English attitude to war underwent a profound change. In the century that followed the loss of most of the French territories of the Angevin kings, the English nobles and knights showed little enthusiasm for campaigning overseas: indeed, it was said at the time that the English knights did not give a bean for the whole of France. The refusal of the Earl of Norfolk to serve in Flanders in 1297 provoked the famous retort from Edward I - 'Aut ibis aut pendebis ' (You will go or you will hang), to which the Earl replied that he would neither go nor hang. The wars in France and Scotland in the reign of Edward I and Edward II gave rise to financial and constitutional strains and to conflict in parliament between the King and both nobility and commons. In terms of military success there was little to show for the expenditure of so much blood and treasure, and in Scotland the English were compelled by 1328 to abandon everything that Edward I and his son had fought for.

The Origins of the Hundred Years War 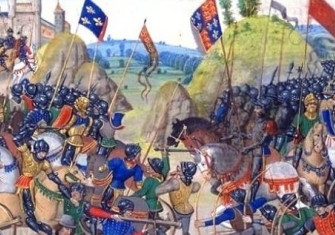