Sylvia Pankhurst is Sent to Jail

Sylvia Pankhurst was taken to the women's jail at Holloway on October 24th, 1906. 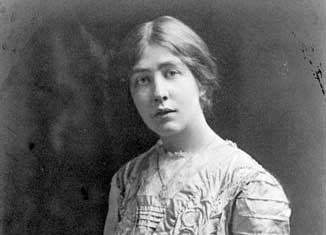 Daughter of Emmeline Pankhurst and younger sister of Christabel, Sylvia Pankhurst was twenty-four when she was packed off to prison for the first time.  A promising artist, she had been a student at the Royal College of Art in London before dropping out in 1906 to join her mother and sister in the Women’s Social and Political Union (WSPU) and the struggle for women’s suffrage. She produced the WSPU’s ‘Votes for Women’ banners, designed the organization’s membership card and was secretary of the national committee, which was based in London.

On October 23rd a group of suffragettes led by Mrs Pankhurst herself infiltrated into the lobby of the House of Commons and started a protest meeting. They were bundled out into the street by policemen, there was what Sylvia Pankhurst called ‘a scrimmage’ and ten of the women were arrested. When they came up in Cannon Street police court the next day, the magistrate refused to listen to them and peremptorily ordered them to be bound over to be of good be­haviour for six months or go to prison for six weeks. They protested and demanded the right to be heard in their own defence, but the magistrate had them removed by the police.

At this point Sylvia walked into the courtroom and complained that women who wanted to give evidence in the case had not been allowed in. Promptly dragged out into the street by force, she tried to make a speech to an interested crowd, but was hauled back into the court again, charged with obstruction and sentenced to pay a pound fine or go to prison for fourteen days. Choosing prison, she was taken to the women’s jail at Holloway with the others in a Black Maria.

Once there, after hours of waiting, they were strip-searched and made to take a bath (the baths, Sylvia wrote, were ‘indescribably dirty’ and the water ‘clouded with the scum of previous occupants’) and then dress in scratchy prison clothes, stamped in black with the broad arrow. On their heads they wore white cotton caps fastened under the chin, and each was provided with a handkerchief to last for a week. They were then marched along corridors and up flights of stairs to be locked one by one in small, stone-floored, iron-doored cells. There was a plank bed with a mattress and pillow ‘as hard and comfortless as stone’, as well as a wooden stool, a single wooden spoon and a tin plate and pint mug, a bit of hard yellow soap and a thin towel, a rudimentary brush and comb, a tin wash-basin and slop-pail, and items of cleaning equipment.

First thing in the morning while it was still dark, there was much jangling of bells and shouting of orders and each prisoner had to wash and dress, empty her slops, roll up her bedding and clean out the cell. Breakfast of bread and skilly (oatmeal gruel) was brought to the cell. After that there was work to do – hemming a sheet or making a shirt or a mail-bag. At 8.30am came chapel, with the prisoners forbidden to speak to each other. At twelve there was dinner of either oatmeal and bread or suet and bread or potatoes and bread. The day was spent almost entirely in the cell except on two days a week when the women walked silently round and round the exercise yard for half an hour. The final meal was bread and gruel again at five o’clock and lights out was at eight.

Sylvia was released on November 6th. She would be imprisoned many more times and subjected to forcible feeding when she staged hunger strikes. Her ardent socialism opened a gap between her and her sister and mother. All three of them were natural autocrats and Sylvia founded her own militant feminist and socialist organization in the East End of London in 1913 and broke away from the WSPU the following year. Fiercely opposed to the First World War, she warmly approved of Lenin and the Bolsheviks, and detested both fascism and lipstick, which she thought ‘reveals the slave mentality’. She died at seventy-eight in 1960.