King Æthelred ordered the massacre of Danes in England on November 13th, 1002. 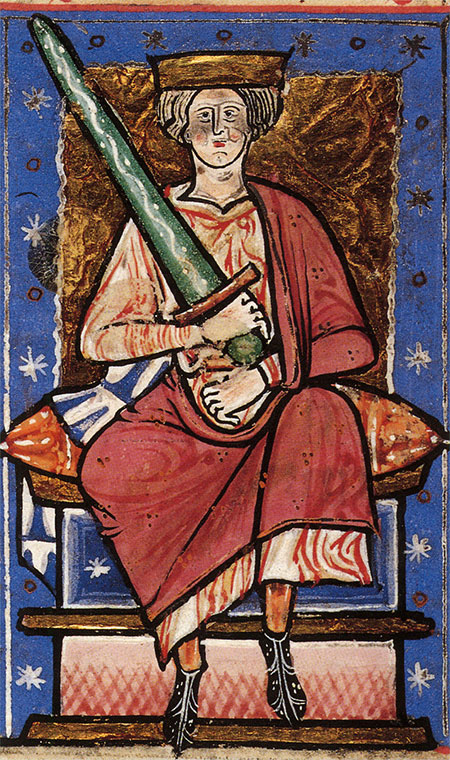 Why St Brice became so popular in Anglo-Saxon England is a mystery. A Gaulish cleric of the fourth century, he succeeded St Martin as Bishop of Tours and behaved so badly that he was driven out of his diocese, but he changed his ways and was greatly revered by the time he died in 444. Little memory of him survives today, except for the massacre ordered on his festival day by King Ethelred of England.

Æthelred the Unready, or the Ill-Advised, had been king since the age of twelve in 978, after his step-brother had been murdered at Corfe on the orders of Æthelred's mother. The pretence that all the leading magnates and churchmen of England had preferred Ethelred to his brother failed to convince and the administration soon had to struggle with fresh waves of attacks by Vikings, who found England temptingly weak. Normandy, ruled by descendants of Norsemen, provided them with handy harbours and they established a base on the Isle of Wight. Sometimes there was fierce English resistance. In 991 Ealdorman Brihtnoth was killed at the famous battle of Maldon in Essex by a Viking host under Olaf Tryggvason, a Norwegian who returned to plunder the north-east in 993. The next year, he and Swein Forkbeard, the Danish king, attacked London together unsuccessfully. Olaf turned to harry the south-east, but Æthelred succeeded in buying him off. The men of Devon stood firm in 998. More often, however, English generals and officials seem to have been incompetent or irresolute.

Unlike his predecessors, Æthelred seldom led troops in battle himself and his regime was unable to find an effective military leader. He strengthened the English navy. He paid Danegeld. He made an agreement with Duke Richard of Normandy that neither would shelter the other's enemies. In the spring of 1002 he married Emma, Duke Richard's daughter and a formidable person in her own right, to cement the alliance.

Perhaps encouraged by the Norman connection, Æthelred gave the order for the slaughter of 'all the Danish men who were among the English race' on St Brice's Day because they meant to kill him and his advisers and take over the kingdom. Danes had been settled in numbers in the Danelaw in England for a hundred years and more, and it would hardly have been possible to murder them. Maybe the decree applied only to more recent arrivals, but whether the government was capable of organising a mass killing effectively is in considerable doubt. How many were actually massacred is uncertain.

Certainly some Danes were killed, and not only men. In Oxford threatened Danish families broke into St Frideswide's church for sanctuary and resisted the local people's efforts to evict them. The local people then burned the place down and the Danes were presumably burned alive with it. This is mentioned in a charter Æthelred issued to St Frideswide's in 1004, in which he recalled his order for 'a just extermination' of all the Danes in England, who had 'sprouted like a cockle amongst the wheat'. His decree had been issued, he claimed, on the advice of all his leading men and magnates.

One of those killed at Oxford, apparently, was Gunnhild, the sister of Swein Forkbeard, which inevitably sharpened the latter’s hostility. The following summer he sacked Exeter which, significantly perhaps, Æthelred had bestowed on Emma. Swein went on to harry Wessex and destroy Wilton. The Viking assaults intensified and a royal charter of 1004 spoke of 'the anger of God raging with ever increasing savagery against us.' When Æthelred died in 1016, almost the whole of England was ruled by Swein Forkbeard's son Cnut. The following year he appropriated Emma.