The illustrious champion of science was created on July 15th, 1662. 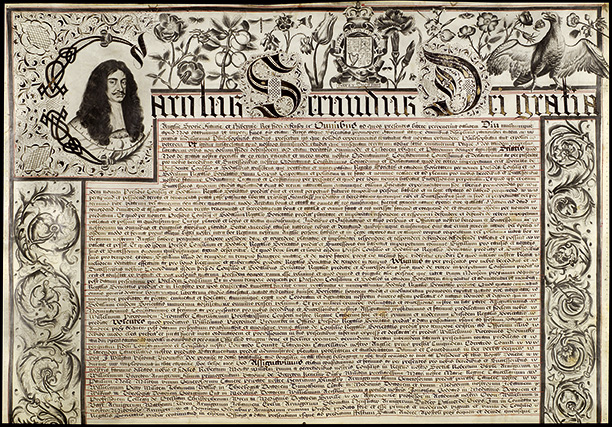 The motto of the Royal Society is Nullius in verba: ‘Take nobody’s word for it.’ It is the oldest national body of its kind in the world and its Philosophical Transactions, going back to 1665, is the oldest continuously published scientific journal in existence. It emerged from small gatherings of men keenly interested in science, in particular from a meeting in London in November 1660 attended by Christopher Wren, who was a professor of astronomy as well as an architect; Robert Boyle, a pioneer of modern chemistry; and two of Charles II’s courtiers, Sir Robert Moray and Lord Brouncker. The king took a lively interest in science himself and enjoyed carrying out experiments in his laboratory in St James’s Palace. At the group’s second meeting Moray was able to announce the king’s approval and it formally became the Royal Society with Charles’ grant of a charter in 1662, followed by another in 1663. Lord Brouncker was its first president.

The society’s purpose was to promote and carry out experiments and encourage argument, discussion and the dissemination of scientific knowledge. One early paper was on ‘An Easy Way of Taking a Vomit’. Robert Hooke, scientist, architect and polymath, was curator of experiments from 1662 and secretary from 1677. Wren was president in the early 1680s, followed by Samuel Pepys. The long presidency of Isaac Newton from 1703 to 1727 bolstered the society’s reputation. Notable subsequent presidents included Joseph Banks, Lord Lister and Lord Rutherford.

From 1710 the society was based in Crane Court off Fleet Street. It moved to Somerset House in 1780, Burlington House in Piccadilly in 1857 and since 1967 has been in Carlton House Terrace. Women have been elected fellows since 1945 and to be a Fellow of the Royal Society (FRS) is a recognition of eminence in scientific and other disciplines. It has some 1,400 members today, who include more than 80 Nobel Prize winners.