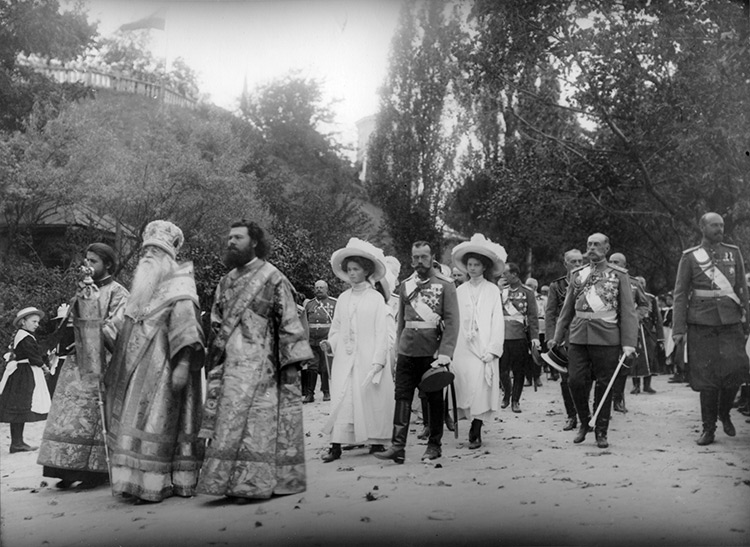 Tsar Nicholas II walks in the grounds of the Monastery of the Caves in Kiev. With him are the Tsaritsa Alexandra and their children, though only the two eldest daughters, Olga and Tatiana, are visible. Flavian, Metropolitan of Kiev and Galicia, leads the way, while the Minister of the Imperial Court, Count Frederiks, is second from the right and Grand Duke Sergei Mikhailovich, far right. The monastery, founded as early as 1024, was the centre of Orthodox Christianity in Kievan Rus and pilgrims have been coming for centuries to worship in its underground churches and see the naturally mummified remains of its monks. But the overriding reason for the Tsar’s presence in Kiev is his unveiling of a grandiose statue of Alexander II on this day, August 30th, 1911, the 50th anniversary of ‘The Liberator’s’ emancipation of the serfs. Statues of grateful peasants are grouped below Alexander’s and there are subsidiary groupings to either side embodying Justice and Mercy.

There seemed little chance of a Jew called Mendel Beilis, arrested in Kiev the previous month, meeting with either. The charge against him was of the ritual murder of a 13-year-old gentile boy, whose body had been found with multiple stab wounds. This was the age-old ‘blood libel’, the belief that Jews needed the blood of one such for mixing with their Passover matzo. Antisemitism was rampant in Russia, seen as a way of unifying the country after the humiliating defeat inflicted by the Japanese in 1904-05. Between 1905 and 1916 the government allowed over 14 million copies of 3,000 antisemitic books to be printed, including of course the notorious Protocols of the Elders of Zion, with its fabrication of a Jewish conspiracy to take over the world. Right from the start there were many in and out of government with the strongest doubts about Beilis’ guilt. Many of Russia’s newspapers and influential figures were incredulous at the charges brought against him, as was liberal public opinion throughout the world. He was to remain in gaol for two years before coming to trial and then finally being acquitted, ending Russia’s own highly damaging ‘Dreyfus case’.

It might have seemed that even more damage was inflicted less than a month after the unveiling by the assassination on September 18th of chief minister Peter Stolypin in the Kiev opera house, in front of the Tsar. Stolypin had already asked to be relieved of his office in March, realising that his attempts to reform Russia in the previous five years had made him too many enemies. Undeterred by the bombing of his villa within three months of his appointment, leaving two of his children seriously injured, Stolypin waged a ruthless campaign against the terrorists. Over a thousand were hanged in 1906-07 after summary courts martial, since the courts were themselves terrorised.  He reformed the unmanageable Duma so it gradually became a more responsible body to which even the Tsar listened. Above all, building on the work of Alexander II, he ended the peasants’ compulsory membership of their village communes, so as to make successful individual peasant farmers possible; these were the ‘kulaks’, spat on by Lenin and exterminated by Stalin. Combined with the enormous industrial advances, here was a formula that could have effected the transformation of Russia. But Stolypin had a whole spectrum of opposition ranged against him, from the Reds and Constitutional Democrats, through redundant officials, disgruntled landowners, Poles and Finns, to court reactionaries backed by the Tsaritsa Alexandra, angered by his banning of Rasputin from St Petersburg. It will never be known just what the motive was of the assassin Bogrov, a Jewish student Socialist Revolutionary, but also a police informer. He was hustled off and executed before any questions could be asked.