Robert II of Scots is born

The first monarch of the House of Stewart was born on March 2nd, 1316. 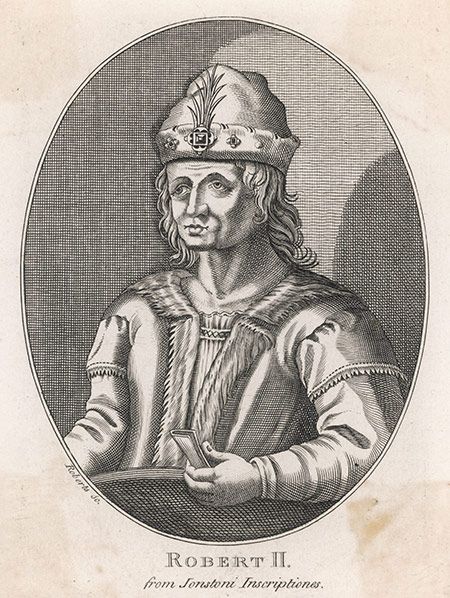 The first of the Stewart kings of Scotland and later of England owed his throne to the fact that his mother, Marjorie, was the eldest daughter of Robert the Bruce, who was King of Scots as Robert I from 1306. The Stewarts, who were crucial Bruce allies, were the hereditary High Stewards of Scotland and Marjorie was the wife of Walter the Steward. Their son was allegedly born at Paisley Abbey, west of Glasgow, which his family had founded. His 19-year-old mother, heavily pregnant, was out riding near the abbey when she fell off her horse and went into premature labour. She was carried into the abbey where she gave birth to a boy, by an early form of caesarean section, which the child survived, but she did not.

Some historians doubt this story, but there is no doubt at all that Scottish history at this stage was chaotically complicated and it would take the baby Robert more than 50 years to reach the throne. He was heir presumptive to Robert the Bruce, who had no male heirs, but in 1324 Bruce had a son named David, who under a peace treaty with the English in 1328 was married at the age of four to the seven-year-old sister of Edward III of England. A year later, on Bruce’s death, he succeeded as David II King of Scots. Meanwhile, Robert’s father Walter had died in 1326, which made the ten-year old Robert the High Steward of Scotland. The Scottish parliament now declared him heir presumptive to David II.

In the 1330s the English renewed their attempts to take over Scotland, the French interfered as allies against the English and powerful Scots barons vied for control. Edward Balliol seized the Scottish throne with English support and held sway for a time and in 1334 young King David’s guardians sent him to France for safety. He returned to Scotland in 1341, but in 1346, leading a punitive raid into England, he was wounded and captured at the Battle of Neville’s Cross, west of Durham. Robert the Steward was there apparently, but ran away.

That could scarcely have pleased David, who was taken to London and kept prisoner in the Tower and later at royal residences in England. Held in comfortable conditions, he came to like and admire his brother-in-law Edward III. In 1357 the English offered to release him in return for a massive ransom of 10,000 marks a year every year for ten years. He accepted the offer and returned to Scotland.

Robert the Steward had meanwhile served as regent in some of the years of David’s absence. Scottish chroniclers disagreed about his competence or lack of it, but he seems mainly to have protected his own interests and obstructed attempts to secure David’s release. He was presumably suspicious of David’s English connections and regular amicable visits to the English court. David had been finding it so hard to raise the money to pay his ransom that in 1363 he suggested recognising a son of Edward III as the official heir to the Scottish throne, if the English would cancel the remaining payments. The Scottish parliament flatly refused to accept any such deal and, when David died in 1371, aged 46, the 54-year-old Robert succeeded him as the nearest male heir.

King at last, Robert now began a successful reign. He knew how Scottish politics worked and he used effective methods to win over foes and keep the loyalty of Stewart supporters with grants of land, titles and official positions. He seems to have encouraged the chroniclers to praise Robert the Bruce’s achievements, to reflect well on the Stewarts. His keen appetite for sex had supplied him with a small army of children by two wives and numerous mistresses. There are said to have been more than 21 of them altogether.

The oldest of the children were now grown-up and well able to help. The oldest son, John, now in his thirties High Steward and Earl of Carrick, was the official heir to the throne and supervised much of the running of the regime. The next son, Robert, Earl of Fife, was also active and a third son, Alexander, known as the Wolf of Badenoch, was the government’s principal figure in the Highlands. Daughters came in handy for marrying to leading families to secure their backing. Isabella, for example, was married to one of the Douglases and Margaret to the Lord of the Isles.

Robert was 74 when he died at the castle he had built for himself at Dundonald, near Kilmarnock, and was buried at Scone. His eldest son John succeeded him as Robert III and the Stewart line was established for centuries to come.