The Road to D-Day

Geoffrey Warner looks at the reasons for the delay in opening a second Allied Front.

'Our country is waging a war of liberation single-handed', complained Stalin in 1941. But it was not until June 6th, 1944, that the Allies opened 'a second front' in Europe with the invasion of Normandy.

During the First World War the Germans had failed to defeat the French and expel their British allies from the mainland of Europe, so that when the Americans entered the war in 1917 they were able to reinforce an already existing front in western Europe. The position in the Second World War was quite different. The fall of France and the evacuation from Dunkirk in 1940 meant that the British and the Americans had to recreate a front in western Europe by means of an amphibious invasion before they could even get to grips with the main body of the German armed forces, let alone defeat them. Even after their sensational victories of 1940 the Germans had felt unable to launch an invasion of the British Isles. To mount an operation in the opposite direction was no less fraught with difficulties. 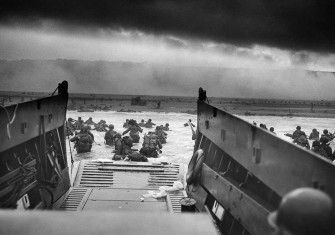 Montgomery and the Preparations for Overlord