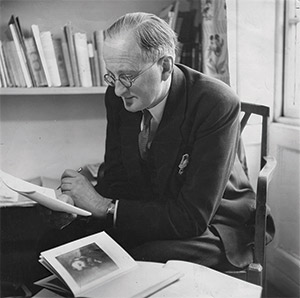 Although it wasn’t published until 1951, as the third volume in the series after Cornwall and Nottinghamshire, preparatory work on The Buildings of England: Middlesex had begun in 1946. The project to compose a descriptively annotated inventory of England’s most valuable buildings county by county is thus contemporary with the inception of the National Health Service, the introduction of National Insurance, the nationalisation of railways, mines and utilities – the foundation of the Welfare State, which was really a further nationalisation, of noblesse oblige and paternalism.

Grandeur, ambition, a sweeping drive towards amelioration, even towards snoek-fuelled utopianism, these were in the air. The creation myth, as potent as that of Jagger meeting Richards at Dartford station 16 years later, has Allen Lane, the founder of Penguin, wandering post- prandially with Nikolaus Pevsner in a rose garden beside the River Colne in the summer of 1945 and asking him what works he wants to write and edit. The war was over. Anything was possible. Hence not just (just!) The Buildings of England (BOE) but alongside it The Pelican History of Art. Twenty nine years on, the 46th and final volume of the BOE was published. The first 20 counties were, extraordinarily, solo efforts. There followed a number of collaborations and a few volumes in which Pevsner’s role was predominantly or exclusively editorial. From a literary and stylistic rather than an architectural-historical point of view the subsequent return to an eschewal of collaboration is fascinating (Staffordshire, Worcestershire). His writing is precise, elliptical, often dryly droll. Lurking within him was the most deadpan of wits. He proselytised for (a type of) modernist architecture and was a modernist writer. In a film I made about him a decade or so ago I likened his rigorous, oddly poetic prose to that of the French novelist Alain Robbe-Grillet. Neither is willing to sacrifice accuracy to the demands of transparency and lucidity let alone ‘accessibility’. The resultant opacity makes demands on the reader; a bit of an effort is required.

It is almost 30 years since he died, almost 40 since he completed his marvellous task. It is a commonplace that great writers live on in their work. Pevsner was granted further life in Susie Harries’ outstanding and often very funny biography of 2011, one of the greatest biographies of the age. There is yet more. Pevsner has given his name to a product just as, say, André Citroën and Josiah Wedgwood did. The vast opus that he mostly created and at least authorised is in a perpetual state of renewal: there is very likely some kinship with the Ordnance Survey and the Forth Bridge. The counties are constantly amended and corrected by autonomous scholars, who can no longer be called collaborators. Given the number of writers who contributed to the original volumes their consistency of method and protocol was impressive. The one exception was David Verey, a ‘gentleman scholar’ and sometime high sheriff of Gloucestershire, whose two, now superseded, volumes on that county are larded with slyly oblique digs at Pevsner himself: for instance, he gratuitously and inaccurately approves another Etonian Henry Woodyer’s ‘intense dislike of anything which savoured of professionalism’.

Subsequent writers have, under the editorships of Bridget Cherry, Simon Bradley and Charles O’Brien, been better mannered. The revisions are also homages to the founding father, the forger of the template, but they are not sycophantic. The ecclesiastical bias has thankfully become less pronounced. While a hierarchy based on a building’s use still determines the form of the guides, the aesthetic worth (or worthlessness) of industrial, commercial and domestic buildings is acknowledged in a way that would have been inconceivable when the enterprise was not even a cottage industry but a couple-in-a-car industry or a caravan industry or a B&B industry. A sort of democratisation was gradually introduced, not least by Pevsner himself, whose enthusiasms broadened with age though he was seldom able to appreciate the Modern Gothic of the 1860s or its musclebound descendant, the Brutalism of the 1960s. The guides are more representative of the quotidian than they were. The bits in between the exceptional are filled in. The formerly overlooked gets its due, to a degree. The supporting cast is allowed a bow. The textures of urbanism are less costively noted than was once the case though they remain problematic: streetscape and topography are rather less susceptible than a single building is to quasi-scientific taxonomy.

Half a century’s advances in studies of the vernacular are widely reflected: what constitutes ‘architecture’ is inconstant and subject to fashion’s whims but it is generally expanding. Like the population of these islands Pevsners have got fatter over the years. Essex has swelled from 170,000 words to 390,000: that can’t entirely be accounted for by such excresences as South Woodham Ferrers and Quinlan Terry’s Quality Street kitsch. Worcestershire, formerly 130,000 words is now 370,000 and it still hasn’t room for the architectural remains of Ruskin’s Guild of St George at Bewdley, nor of Britain’s best preserved plotland development to the north of that handsome town: democratisation evidently has its limits.

What Bernard Rudofsky called ‘architecture without architects’ still seems suspect since its ad hoc expressions stand outside the system of schools, movements and isms which underpin the project. The magnificent sail lofts at Tollesbury, absent from the first two editions of Essex, have, in the third, been given all of three lines, no doubt because they have been refurbished by an architectural practice which is based in one of them and have thus acquired a legitimacy.

Revisions are also corrective. The earliest editions mysteriously omit buildings which by Pevsner’s own evident criteria ought to have been included but slipped through the net. No longer. They are pinned down and classified. The compendium gets ever more compendious. Pevsners, ever breaking new ground, provide an instance of when fatter means better. Britain and Ireland are the most architecturally scrutinised countries in the world. No other nations have such a systematic account of one man and his disciples’ tectonic verdicts, prejudices, biases and quirks of taste gloriously posing as an impersonal record.