Richard Cavendish explores the circumstances surrounding the election of Tommaso Parentucelli as Pope, on March 6th, 1447. 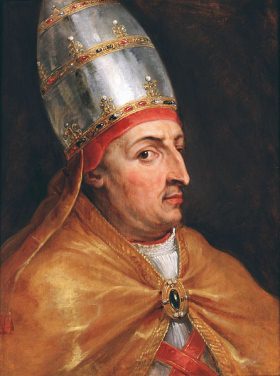 The election of the Bishop of Bologna, Tommaso Parentucelli, as Pope in succession to Eugenius IV in March 1447, came at a time when the Catholic Church in the West was still recovering from the traumas of a divided Christendom under the Great Schism (1378-1417).

Despite the ending of the latter by the Council of Constance, there remained tensions and unfinished business between the College of Cardinals and the papacy over the balance of power to be struck, and Nicholas V had to face at his election a continuing rival 'anti pope', Felix V, who had been elected in opposition to Nicholas' predecessor Eugenius V by the Council of Basle in 1439.

Nicholas' ability, combined with the good offices of Charles VII of France, to coax his rival into abdication and honourable retirement, and to find places in the Roman college for several of the rival cardinals who had elected Felix at Basle, was testimony to his abilities as a conciliator. This skill was as needed in temporal as in spiritual matters, given that the papacy was a key player in the politics of Renaissance Italy. Nicholas was able to improve relations with the aristocratic families of Rome, ever jealous of their privileges compared with their overlord, the Holy See.

Even more important he established good relations with the German Holy Roman Emperor Frederick III – vital, since the Emperor with his quasi-hieratic status could act as a potential rallying point for the papacy's opponents. Nicholas managed to secure his rights to senior church appointments throughout the German Reich. In return Nicholas crowned Frederick as Emperor in St Peter's in Rome in March 1452, in an echo of the famous coronation of the first Holy Roman Emperor, Charlemagne, by Pope Leo III on Christmas Day 800.

Nicholas' papacy marks a transition point between the world of the late Middle Ages in Italy and that of the High Renaissance His patronage of artists included the Florentine artist Fra Angelico and also Benozzo Gozzoli, and he combined the practical revitalisation of Rome's public buildings, bridges and fortifications, which the long years of papal residence in Avignon had left in disrepair, with the encouragement of Renaissance scholarship and revival of classical texts

In particular he promoted the Greek inheritance, to which renewed contact with the Byzantine world in the union of Orthodox and Catholic at the 1439 Council of Florence had given fresh impetus.

That union of East and West however had failed to save Constantinople from the long-feared final onslaught of the Ottoman Turks, the city's siege and capture in 1453- which brought with it the end of the Byzantine Empire – was a psychological blow echoing those of the Black Death and Schism a century earlier.

Nicholas' reaction was to try and prod the rulers of western Christendom into a new crusading initiative, but with France enfeebled by her long struggle with England in the Hundred Years' War and England herself teetering on the brink of civil war between Lancaster and York, only Philip the Good of Burgundy responded – with his famous theatrical 'Feast of the Pheasant' at Lille in 1454 and its oaths of crusade – which failed however to be translated into any concrete action.

With continued quarrels and rivalries among the various Italian states hindering any common purpose in the peninsula, Nicholas died in March 1455 at fifty-eight years of age, disappointed in his hopes of reversing the tide against the Turks and re-establishing the papacy's prestige on a new and unchallenged pinnacle.

Patron of Renaissance culture he may have been, and also an instigator of the canonisation of the Franciscan reformer Bernardino of Siena, but Nicholas was unable to address his energies to any concrete reform of the weaknesses and abuses of the late medieval church. It was during the years of Eugenius and Nicholas' pontificates that the humanist Lorenzo Valla wrote his penetrating critiques of Thomas Aquinas, bedrock of traditional Catholic theology. Valla's criticisms of papal power, the corruption of morals in the Church and the privileges of the religious elite were precursors of the wider storms that were to be whipped up by men like Erasmus, and, eventually, the direct challenge to the papacy that came from Martin Luther.