The story of a country that has long punched above its weight is told in Scotland’s refurbished National Museum, says David Forsyth. 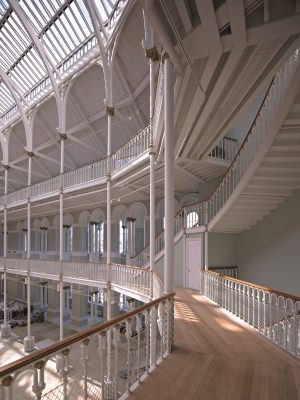 Although relatively small, Scotland has been home to many pioneering discoveries and has provided fertile ground for the promotion of ideas that have changed and improved the lives of people across the world. Yet the sheer scale at which in the past Scots have left their homeland and engaged in global and imperial enterprise perhaps partly explains why there has only been a purpose-built National Museum of Scotland since 1998 (the year before the opening of the Scottish Parliament).

The state-of-the-art building that marked that inauguration in the heart of Edinburgh naturally focused on telling the history of Scotland. Now, following a £46.4 million overhaul and three years closure, the adjoining part of the museum complex, a Grade A listed Victorian structure inspired by the Crystal Palace, has reopened. Sixteen new galleries present the collections afresh to tell the story of Scotland and Scottish people’s engagement with the wider world. Key to this contextual interpretation is the new Discoveries Gallery, through which visitors are introduced to the museum’s four themes: the natural world; art and design; science and discovery; and world cultures via individuals who contributed to these spheres and to Scotland’s identity at large.

Edinburgh, or the ‘Athens of the North’ as it has been termed, was the centre of the 18th-century Scottish Enlightenment, a hugely productive period in terms of national creativity, and a number of explorers, inventors, innovators and thinkers from this period feature here.

One of them, James Watt (1736-1819), popularly linked to the development of the steam engine, trained as a scientific instrument-maker and ran a successful instrument-making business in Glasgow. The Discoveries Gallery shows a cistern barometer dating to around 1760, the only surviving signed instrument made by Watt in his workshop.

Watt’s patron and teacher was Joseph Black (1728-99), an eminent chemist who developed the theory of latent heat and discovered carbon dioxide. Some of the glassware used by Black in his early practical demonstrations is shown beside his friend’s barometer to symbolise the close connection between the two men.

The museum is not limited to well-known names. Beyond the likes of David Livingstone, visitors can discover figures such as James Bruce of Kinnaird (1730-94), the explorer who became the first European to map the source of the Blue Nile. Illustrating his story is the silver-mounted coconut cup from which he toasted the health of George III on November 4th, 1770 ‘at the fountains of the Nile’, on the shores of Lake Tana in present-day Ethiopia.

The long-standing and strong tradition of migration in Scottish society is an important theme. Many Scots made their name outside their native land. One such was John Muir (1838-1914), regarded as the ‘father’ of the United States National Park Service and a proto-environmentalist. Muir’s story was the typical pioneer’s tale of the type used to inspire generations of prospective emigrants. A Scot from a modest background who emigrated with his family to the United Sates, he became the trailblazing conservationist that we know of today by dint of hard work and application. He promoted a passion for nature through his writings as he tirelessly campaigned for the preservation of some of America’s most outstanding areas of natural beauty.

The gallery also illustrates that Scotland has been a place where people have come to learn and expand their knowledge. Some of the world’s most influential scientists and thinkers have studied here, particularly in the area of medicine. Charles Darwin (1809-82) attended the renowned medical school at the University of Edinburgh between 1825 and 1827, though the vast natural history collections of the university (now part of the umbrella group, National Museums Scotland) proved more interesting to the aspiring naturalist. While in Edinburgh Darwin learned how to observe, dissect and prepare specimens and took private lessons in taxidermy. A stuffed scaly-throated earthcreeper collected by Darwin during the voyage of HMS Beagle reflects this connection.

The accidental discovery of penicillin in 1928 by one of Scotland’s ‘greats’, Sir Alexander Fleming (1881-1955), is one of the most successful medical breakthroughs of the 20th century. This serendipitous event led to the development of the antibiotic treatment of infectious diseases. Fleming was the recipient of a huge number of international awards and honorary degrees. Perhaps the ultimate accolade was his 1945 Nobel Prize for Medicine on display for the first time.

Another familiar name is John Logie Baird (1888-1946). In recognition of Baird’s achievement as the first person to demonstrate a working television, the world’s earliest surviving colour TV set is on display. Based on Baird’s colour system, this model from 1946 is the only one of its kind in the world and has not been displayed before.

The American historian Arthur Herman may be overstating Scotland’s case in his book The True Story of How Western Europe's Poorest Nation Created Our World and Everything In It (2001). But as visitors navigate their way around the redeveloped National Museum of Scotland they might ponder on the evidence for a small nation which has punched well above its weight in so many ways.