The Treaties of Tianjin

The treaties that ended the first part of the second Opium War were signed on 26 and 27 June 1858. 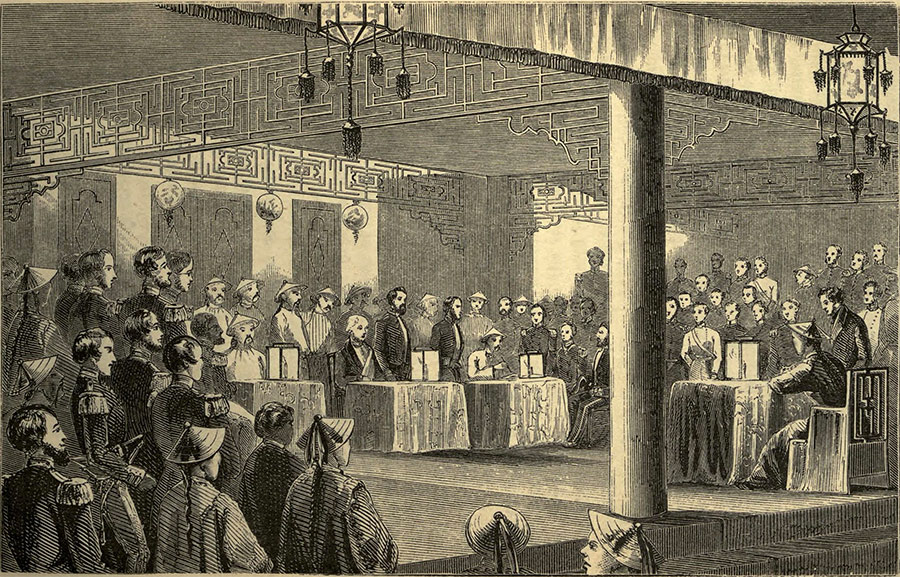 British traders were profitably importing opium into China in defiance of the Chinese regime from the early 1800s and determination to open China further to Western commerce inspired the two Opium Wars. Treaties signed with the Chinese in the 1840s gave the British Hong Kong and allowed them to live and trade in several other Chinese 'treaty' ports. In 1856 Chinese officials boarded a British ship, the Arrow, and took its Chinese crew prisoner, while a French missionary was murdered in Guangxi. The two countries took these and other 'insults' as a useful excuse to go to war.

The eighth Earl of Elgin, successor of the ‘Elgin marbles’ earl and a distinguished public servant who had been governor-in-chief of British North America, was put in charge and late in 1857 his Anglo-French force bombarded and took Guangzhou (Canton). Elgin privately felt profoundly ashamed, but with thousands of troops and a flotilla of gunboats he went on north to Tianjin (Tientsin) for negotiations while playing the role, as he said, of ‘the uncontrollably fierce barbarian’. The Chinese government reluctantly signed treaties with the British and French on June 26th and 27th, which provided more ports for Western use and opened the interior to the barbarians, including Christian missionaries, and Peking (Beijing) to foreign envoys.

The Russians and Americans, who had sent along ‘neutral observers’, received the same concessions. In Shanghai later in the year China accepted Western importation of opium. After more fighting, in 1860 the Chinese agreed to observe the treaties.