The young queen married Albert of Saxe-Coburg and Gotha on 10 February 1840.

Victoria was 18 when she succeeded to the throne in 1837, amid mounting speculation about who she would marry. The key figure proved to be her German uncle, Leopold of Saxe-Coburg and Gotha, her mother’s brother, who had been King of the Belgians since 1831. To further strengthen his family’s European influence, he hoped to secure Victoria for one of his nephews, Ernst or Albert of Saxe-Coburg and Gotha. The youngest brother, Albert, was three months younger than Victoria and he later recalled that even as a small boy he had been told that one day he should marry Victoria and had always thought of her in that light.

At the apparently innocent suggestion of Leopold’s adviser, Baron Stockmar, in April 1836 Victoria’s Saxe-Coburg mother invited Ernst and Albert to London for the princess’s 17th birthday celebrations in Kensington Palace, along with their father, the Duke of Saxe-Coburg. Young Victoria was smitten with Albert, whom she thought extremely handsome. They talked happily and played piano duets together and, after he left London for Brussels in June, she wrote to tell Uncle Leopold that she had cried bitterly at Albert’s departure and to thank him for ‘the prospect of great happiness you have contributed to give me in the person of dear Albert’.

On Victoria’s accession, Albert wrote to wish her ‘a long, happy and glorious’ reign and later sent her presents from abroad. Victoria was enjoying her independence and she was determined not to be rushed into a bad marital decision, of which her family offered all too many examples. After consultations with Leopold and Baron Stockmar, she invited Albert and Ernst to England again in 1839. They arrived at Windsor Castle in October and the instant Victoria saw Albert she made up her mind. A few days later she summoned him to her private room and it was she who proposed to him, as protocol required. He accepted immediately and they kissed over and over again. All the talk was in German, though Albert’s English would soon improve.

‘Oh!’, Victoria confided to her diary, ‘to feel I was, and am, loved by such an Angel as Albert was too great delight to describe! he is perfection … Oh! how I love and adore him I cannot say!!’ The couple spent every minute they could together, singing and dancing, while seizing every opportunity to kiss and cuddle in private, until Albert left in November to return to Germany.

Much argument now broke out about what exactly Albert’s position would be after the marriage, what rank and precedence he would hold, how his household was to be organised and how much he would be paid. There were those who did not relish the prospect of paying for a penniless foreign princeling and there were also false rumours that Albert was a Roman Catholic. Matters were sorted out, however, and Albert was invested with the Order of the Garter and escorted back to London from Gotha in January 1840.

The wedding in February, the first marriage of a reigning English queen since Bloody Mary almost 300 years before, was held at 1pm in the Chapel Royal at St James’s Palace. Victoria arrived in a procession of carriages from Buckingham Palace, to which she had moved to get away from her mother. She wore a white dress of heavy silk satin, trimmed with Honiton lace. She had a white lace veil and wore a diamond necklace and earrings as well as a sapphire brooch given her by Albert and she carried a wreath of orange blossoms, a symbol of fertility. Albert was in a British field marshal’s uniform and was escorted by a squadron of Life Guards. He entered the chapel to the strains of Handel’s ‘See, the conquering hero comes’, followed by Victoria, who was given away by her uncle the Duke of Sussex. Twelve young bridesmaids carried her train.

There was not remotely room in the chapel for the huge crowds that had gathered and which cheered the young couple at every chance. The wedding breakfast was held at Buckingham Palace and the wedding cake weighed 300 pounds. The newlyweds went off to Windsor Castle for a three-day honeymoon. Victoria described her wedding day as ‘the happiest day of my life!’ and the wedding night that followed as ‘most gratifying’.

There is no doubt about the sexual intensity involved. Victoria was pregnant within a couple of months of the wedding and, although she would always detest pregnancy and childbirth, she and Albert would have nine children. He proved himself an admirable consort and made a strong positive contribution to British life. His premature death at 42 in 1861 was a devastating blow to Victoria. It was many years before she could even begin to recover. 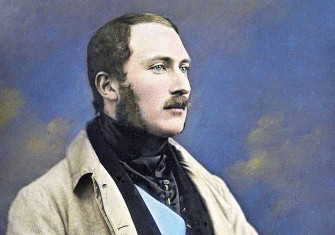 In Mourning for Prince Albert 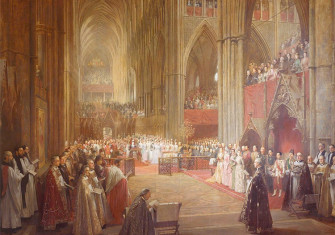