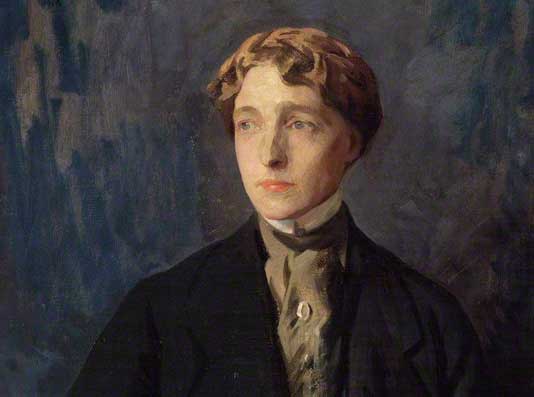 On 9 November 1928 Bow Street Magistrates Court was crowded. D.H. Lawrence’s The Rainbow had been successfully prosecuted for obscenity in the same courtroom 13 years earlier. Now it was the turn of The Well of Loneliness by Radclyffe Hall.

The perceived obscenity in Hall’s book was its subject matter: it presents lesbianism – ‘inversion’ was Hall’s preferred term – as both normal and natural.

Published by Jonathan Cape in July, the book had been well reviewed, with little, if any, shock expressed. This is not surprising. The Well of Loneliness is many things, but sensationalist it is not.

But on 19 August, the Sunday Express printed an incendiary editorial calling for its ban: ‘I would rather give a healthy boy or a healthy girl a phial of prussic acid than this book’, it spluttered. The call was then taken up by a cabal of zealous evangelicals in government, led by the Home Secretary, William Joynson-Hicks, known to all as Jix.

Cape withdrew the book, but leased the plates to the Pegasus Press in Paris.

Jix pounced. It was his mission to stop ‘the flood of filth coming across the Channel’. Unfortunately, Sir Francis Floud, chairman of the board of Customs & Excise and responsible for seizing obscene materials, had read the book and admired it.

So prosecution was brought against the publishers at the magistrates’ court; Jix did not trust the judgment of a jury. The defence had some 40 expert witnesses in court, among them Virginia Woolf and E.M. Forster, ready to testify to the book’s merits, although neither were great admirers in private. ‘The dullness of the book is such that any indecency may lurk there’, Woolf wrote to a friend. ‘One simply can’t keep one’s eye on the page.’

The magistrate, Sir Chartres Biron, allowed just one defence witness to speak, and that briefly. Expert opinion was just opinion, he said. And opinions were irrelevant unless they were his own, in which case they were the law.

He ordered all copies of the book to be seized and burnt. It would not be printed again in Britain for 20 years.