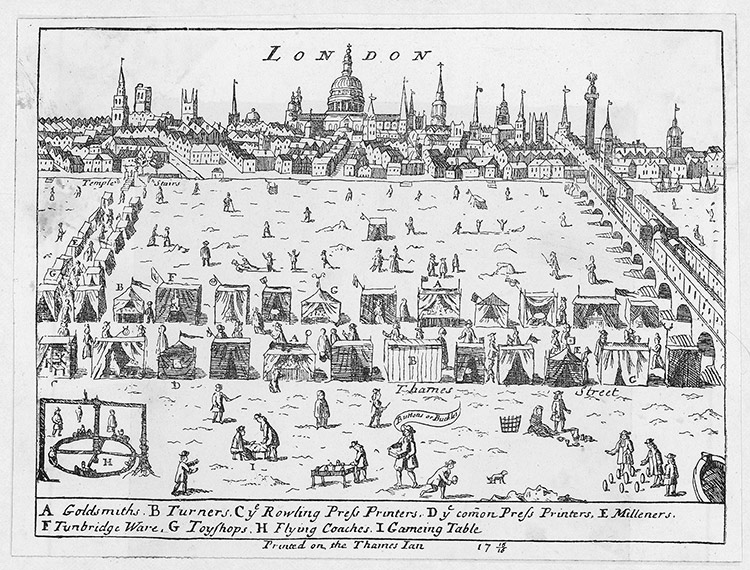 From the 1550s to the early 1800s, during a period known as the Little Ice Age, the River Thames in London occasionally froze solid for so long, sometimes for weeks or months, that fairs were held on it and people wrapped up warmly and flocked to them. The one that began that winter in 1715 lasted for almost three months and had all the usual features. People played skittles, enjoyed street entertainers and watched bulls being baited. They strolled happily about on the ice or were pulled along on sledges or boats by Thames watermen who were temporarily out of work and needed a fee. Bonfires were lit on the ice and food was cooked. Shops and restaurants opened in canvas tents. Souvenirs were on sale in printers’ shops.

A ‘street’ of booths ran across from Temple Stairs to the south bank, crossed by another, and according to a contemporary account ‘a great cook’s shop was erected’ and gentlemen went to dine there as frequently as at any ordinary establishment. Two big oxen were roasted whole at one point in January. There was plenty to drink, as taverns along either bank of the river opened their own booths on the ice and in the evenings sex was readily on sale. The Prince of Wales and the Duke of Marlborough with an escort of noblemen crossed from Whitehall Palace to Lambeth and back again. Four young men decided to walk up the middle of the river as far they could get and none of them were ever heard of again, though whether it was the river or the cold that killed them nobody knew.

A factor in all this was the old London Bridge, whose 19 narrow arches and their breakwaters slowed the stream down. The new bridge, which opened in 1831, had only five arches and helped bring the freezing of the Thames to an end. The last frost fair was in 1814.