The decree that led to the internment of Japanese-Americans was passed on 19 February 1942. 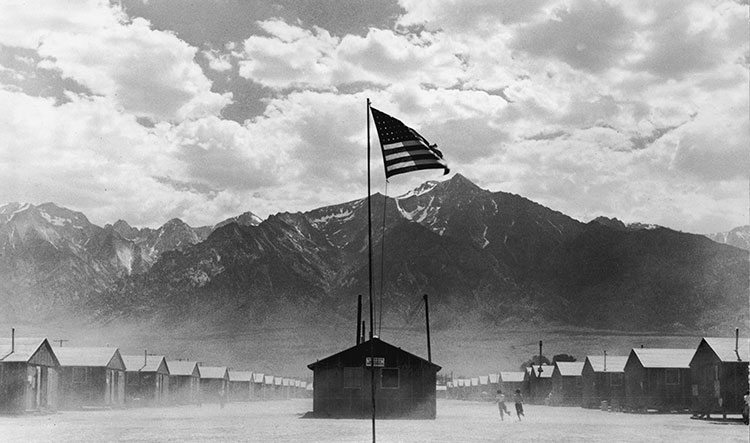 For decades Asian-Americans had suffered prejudice. They were denied land ownership or voting rights and were unable to testify in court against whites. The surprise Japanese attack on Pearl Harbor, the vast US Navy base in Hawaii, on December 7th, 1941 was to have a terrible effect on America’s Japanese community, especially on the West Coast.

This was despite the fact that the Munson Report, commissioned secretly in early 1941 by President Franklin D. Roosevelt, had concluded that the vast majority of Japanese-Americans were ‘loyal to the United States’ and that ‘there will be no armed uprising of Japanese’.

But discrimination against Americans of Japanese ancestry ran deep and, in the febrile atmosphere post Pearl Harbor, President Roosevelt passed Executive Order 9066 on February 19th, 1942. It would shatter the lives of tens of thousands of loyal Americans.

The executive order was enforced on March 9th, 1942, when Public Law 503 was passed after the briefest of discussions in the Senate. From then on, around 120,000 Japanese-American men, women and children – two thirds of whom were full US citizens – were evicted from the West Coast of the United States, organised in California by Attorney General Earl Warren, and interned in camps, often in the most squalid of conditions.

Ironically, in Hawaii, which had actually suffered the effects of Japanese military attack, only a few Japanese-Americans were interned, despite the fact that they made up around 40 per cent of the island’s population. This apparent discrepancy points to the fact that the West Coast population may have been deliberately targeted.

Other ethnic minorities in the United States were also targeted, including around 11,000 people of German heritage and approximately 3,000 Italian-Americans. But no ethnic minority suffered more than Japanese-Americans, whose ordeal only became worse as the fierce fighting in the Pacific and news of the Imperial Army’s atrocities became daily news across the United States.

In December 1944, as Japan’s defeat became inevitable, the act was suspended, almost three years exactly since that ‘day of infamy’ at Pearl Harbor. The final internment camps were closed down in 1946, but the fortunes of Japanese-Americans took years to restore.