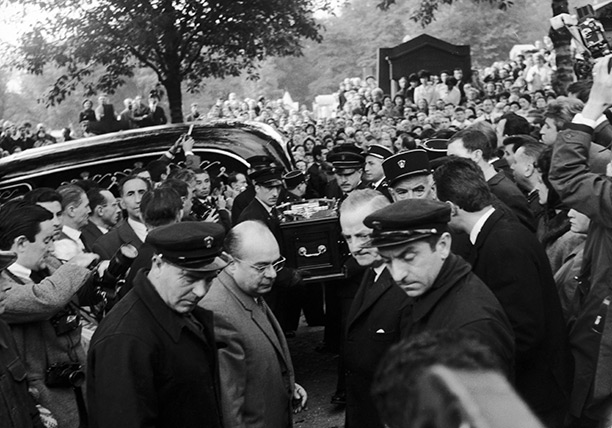 Her songs of love and loss in a voice that Jean Cocteau described as ‘like black velvet’ made Edith Piaf a Parisian idol. She was only 47 when she died in her villa on the French Riviera and her body was immediately taken to Paris. Thousands lined the streets to watch her funeral procession to the Père Lachaise cemetery, where more than 40,000 saw her interred.

She had known much sorrow in her life. Born Edith Giovanna Gassion in a Paris slum in 1915, she was abandoned by her mother and brought up by her grandmother, who ran a brothel in Normandy. Still a child, she rejoined her father, an itinerant acrobat and street-performer, and began singing as part of his troupe. When she was 17 she had a baby daughter by a lover, but the little girl died at the age of two and Edith would have no more children.

Her rise to stardom began in 1935 when she was 19. A night-club owner called Louis Leplée took her on as a singer in his club, presenting her as a talented urchin from the streets and giving her the stage name Piaf, meaning ‘sparrow’, because she stood only 4ft 8in tall. She was a huge success and although Leplée was murdered the following year, Edith started singing in the Paris music halls and on radio, made records and began writing her own lyrics. By the war years she had become one of the top entertainers in Paris.

She became internationally famous after the war and toured Europe, the United States and South America. She married twice, had many lovers and friends including Maurice Chevalier, Cocteau, Yves Montand, Charles Aznavour and Marlene Dietrich. The great love of her life was the boxer Marcel Cerdan, who was killed in a plane crash in 1949. She had treatment for addictions to alcohol and drugs, but what Paris Match called ‘an electricity of the heart’ between Piaf and the people of France never faltered.