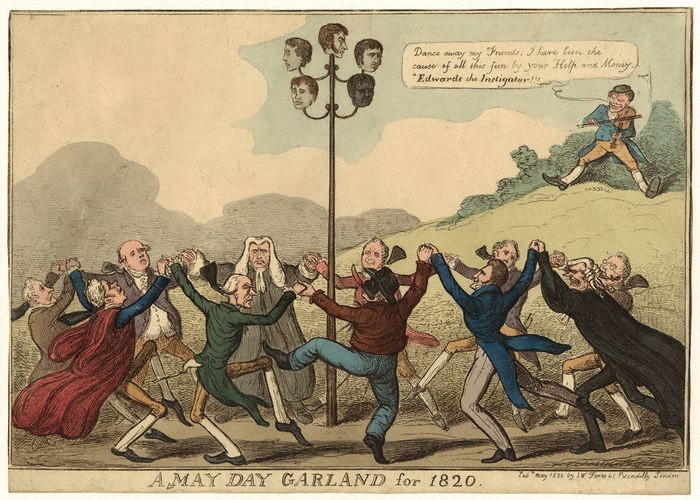 Arthur Thistlewood was a known firebrand at the time he formed his conspiracy to assassinate the entire Cabinet, including Prime Minister Lord Liverpool, at a dinner.

Inspired by radical thinker Thomas Spence and angered by the Peterloo Massacre and the subsequent passing of the ‘Six Acts’, he was the leader of the ‘Spencean Philanthropists’. His intention was to burst into the dinner and kill those present with pistols and grenades. He would then form a ‘Committee of Public Safety’ to oversee a revolution leading to the return of land to public ownership, the abolition of the aristocracy and the introduction of universal suffrage – to include women.

Unbeknown to Thistlewood, however, his plan was fundamentally compromised: his second in command was a police informer and the putative dinner was in fact a fiction created to tempt their group to action.

One of the group rented a house on Cato Street as a base. They were closely observed by police. On 23 February, the supposed date of the dinner, in the public house opposite, were a Bow Street magistrate and 12 Bow Street Runners, who had instructions to capture and charge the conspirators.

Knowing the conspirators to be armed and dangerous, they had requested reinforcements from the Coldstream Guards, but when these failed to materialise the police decided to act alone as soon as all the plotters had assembled. At 7.30 pm they attacked the house. In the ensuing scuffle Thistlewood killed a policeman with a sword, before escaping through a window with some of his co-conspirators.

With their group utterly compromised, Thistlewood and the other escapees were quickly rounded up. They were tried for treason and sentenced to hanging, drawing and quartering. Five sentences were commuted to transportation to Australia and the rest to the slightly less gruesome hanging and beheading.