The Magyars of Hungary were defeated by an army led by Otto I, on August 10th, 955. 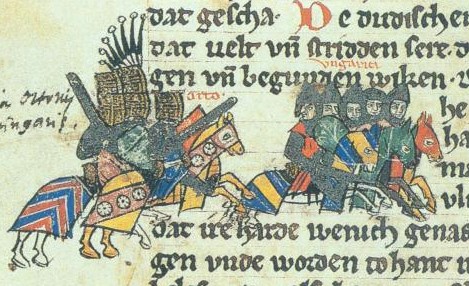 The Magyar horsemen of Hungary had been riding into Central Europe on plundering expeditions for fifty years and more. They either took what they wanted by force or were paid to go away until the next time. Their impact gradually lessened, but they still watched for disorder in the lands of the East Franks, the eastern part of the old empire of Charlemagne, and serious trouble between the local warlords could prompt a Magyar incursion. In 936, however, a dynamic Saxon leader, Otto I, later to be called Otto the Great, was crowned king of the East Franks and Saxons. He considered himself the successor of Charlemagne and began to reduce his subordinate lords to obedience, with the support of the Church, which much preferred order to anarchy. In 953 Conrad of Lorraine, who was Otto’s son-in-law, and Liudolf of Swabia, who was Otto’s own son and expected successor, rose in revolt. Other lords joined them and the Magyars saw an opportunity. An estimated horde of over 50,000 stormed through Bavaria and Franconia in 954. They crossed the Rhine to devastate north-eastern France and ride south through Burgundy into Lombardy before returning home.

In 955 they returned and menaced Augsburg in Swabia. It was one raid too many and Otto’s quarrelsome lords, including Conrad of Lorraine himself, evidently decided that enough was enough. They closed ranks behind Otto, who led an army drawn from Bavaria, Swabia, Bohemia and Lorraine to confront the Magyars. It was a mark of his authority in his kingdom by this time that only a few of his troops came from his own home ground of Saxony, where a Slav invasion was threatened. Battle was joined at the Lechfeld, somewhere south of Augsburg on the banks of the River Lech, and legend credited the outcome to the Holy Lance, the spear that pierced Christ’s side on the cross, which Otto allegedly bore. After a fierce encounter, in which Conrad of Lorraine was killed, Otto’s men drove off the Magyar horsemen and mounted archers, took their camp and their loot and pursued them ruthlessly for three days, killing many of them out of hand.

The victory not only put paid to the Magyar menace for good, but powerfully strengthened Otto’s hand. A strong central authority was obviously needed and by the end of his life Otto had not only created something that could be called Germany, but had also revived the Holy Roman Empire. Before the Lechfeld battle he had already had himself crowned King of the Lombards and married their widowed queen, and in 962 Pope John XII crowned him Holy Roman Emperor in Rome. He went on to bring the south of Italy under his sway before his death in 973.