The Battle of Chacabuco

A major conflict in the Chilean War of Independence was fought on 12 February 1817. 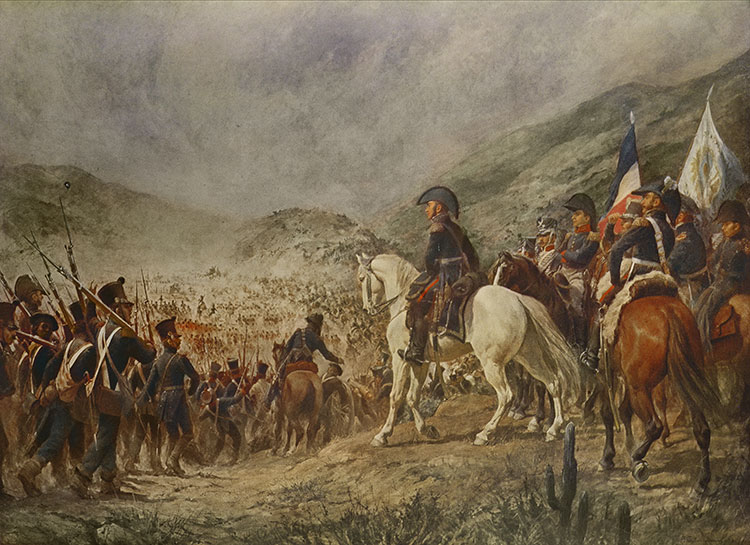 The first ‘empire on which the sun never set’, Spain’s territorial control of the world reached its greatest extent a decade before the end of the 18th century. Sunset, however, was imminent. Following Napoleon’s invasion of Spain in 1808, the country’s South American colonies seized the opportunity to assert claims for independence. Revolts broke out across the continent signalling the end of Spanish rule in Paraguay in 1811 and in Argentina in 1816. After a nearly decade-long war, Chilean independence was declared at a ceremony on 12 February 1818, on the first anniversary of the battle that had made it possible.

Born to Spanish parents in Argentina, José de San Martín had fought in Europe for the Spanish against Napoleon. He returned to his native country in 1812 and shortly after led the army of the United Provinces of the Río de la Plata to victory against the Spanish at the Battle of San Lorenzo in Argentina. The reasons for his change of allegiance are contentious; it has even been claimed that he was an undercover British agent. Following San Lorenzo, he turned his attention to Chile. San Martín assembled around 6,000 soldiers as the Army of the Andes and crossed the mountain range in 1817, losing an estimated third of his men to the conditions. San Martín allied with Bernardo O’Higgins, a wealthy Chilean patriot of Irish descent in command of a separate army, and together they met the Royalist force, under the command of Rafael Maroto at a valley called Chacabuco near Santiago. Their 3,600 men defeated Maroto’s 2,500-strong army, expelling Royalist forces north into Peru and O’Higgins assumed the title of Supreme Director of Chile. The Battle of Chacabuco did not secure independence however; the Army of the Andes was defeated by the Royalists at the Second Battle of Cancha Rayada, before victory at the Battle of Maipú on 5 April 1818 brought an end to all major Spanish operations in Chile.