The Battle of Almanza

A decisive engagement in the War of Spanish Succession was fought on April  25th, 1707. 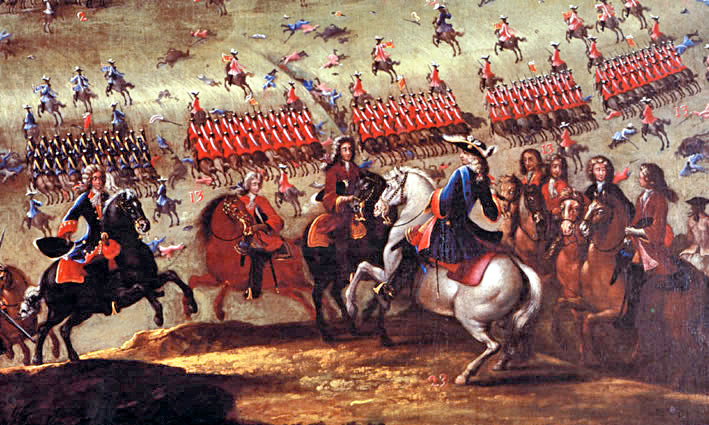 James Fitzjames, Duke of Berwick, was the illegitimate son of the future James II of England by his mistress Arabella Churchill, elder sister of the great Duke of Marlborough. Born, brought up and educated in France, he joined the French army, in which he would prove a notably competent commander in the War of the Spanish Succession, which began with a dispute between Louis XIV and the Austrian Habsburgs over the vacant Spanish throne.

The war drew in the English, the Dutch and the Portuguese on the Austrian side against the French, who in Spain were supported by Castile, but opposed by the Catalans.

There was fighting in Germany, Italy, Spain and the Netherlands, and the Duke of Marlborough and Prince Eugene of Savoy won brilliant victories for the allies, including Blenheim in 1704. The French seemed to have lost the war and in Spain an Anglo-Portuguese army under the Earl of Galway (a French Huguenot named Ruvigny) and General de Las Minas for the Portuguese for a time occupied Madrid. In February 1706 Louis XIV created Berwick a Marshal of France and sent him to take charge in Spain. The decisive battle occurred on Easter Monday in 1707 when the allied army arrived at the walled town of Almanza, south-west of Valencia, and found Berwick waiting for them. About half Berwick’s army were French and half Spanish, with a single Irish regiment.

Berwick organized his army in two lines in front of the town, with his infantry in the centre, the French cavalry on the left and the Spanish cavalry on the right. The allied army had British, Portuguese, Dutch and Huguenot French contingents, and at Las Minas’s insistence Galway gave the Portuguese cavalry the place of honour on the right, which proved to be a crucial mistake. According to Berwick’s own account, the Spanish cavalry charged the enemy left and broke them, but were then driven back by the fire of the allied infantry in the centre. They withdrew, regrouped and charged again with the same result.  Berwick then moved some of his French infantry forward to the attack and with the cavalry charging again, the allied left wing was beaten. Things were also going well for Berwick on his right wing, but some of the allied infantry in the centre broke through and reached the walls of Almanza. However, they were charged by Berwick’s cavalry and driven back, at which the Portuguese cavalry ran away. Las Minas, who was in his eighties, stood his ground bravely, though his mistress, who had dressed as a man to fight, was killed by his side, but the disappearance of the Portuguese cavalry left the British, Dutch and Huguenot infantry’s flank completely exposed and they were overwhelmingly defeated.

Berwick reckoned the allied casualties at about 5,000 killed and 10,000 taken prisoner, while he lost some 2,000 men, though that figure is generally considered much too low. The victory was a major factor in securing control of Spain for the Bourbons.