The support and camaraderie of close-knit communities were a double-edged sword. Nothing was private and reputations could be ruined at the twitch of the curtain.

I recently moved into a village and a strange thing happened: after six months, I know my neighbours; I’ve been to the houses of people in the village; I regularly chat to the owner of the village shop and stop to talk on my daily walks. This is a novelty. I’ve previously lived in some of the most densely populated parts of Britain, where I could recall the first names of my immediate neighbours – was even on smiling terms with one or two – but knew none well. But now I am living as most people in history would have.

Most lived and died where they were born, in communities often of fewer than 400 people. Even those who moved to towns and cities in the 16th to 18th centuries joined neighbourhoods that recreated village dynamics. Everyday life consisted of the ebb and flow of social relations through the sharing of labour and facilities, such as bread ovens and butter churns, the lending of household items, doorstep sociability and the exchange of gossip. This was community.

Such cordiality combined with relentless surveillance. Privacy was not considered a virtue. Frequent social interaction, few diversions and habitual patterns of behaviour made for an almost obsessive interest in the lives of others when something mildly out of the ordinary occurred. The scrutiny must have felt inescapable. Every childhood embarrassment, teenage indiscretion and marital quarrel was known to all – and judged by them. If you exchanged heated words with your neighbours over a boundary, inexplicably had more money than usual, or entertained someone of the opposite sex after dark, it quickly became the talk of the town. Laura Gowing, Elizabeth Foyster and others have explored, for example, how communities regulated behaviour with rituals such as charivaris and skimmingtons to ridicule and shame those who transgressed, such as ‘henpecked’ husbands, men who were perceived to fail to meet masculine ideals of authority in their house.

The comforting familiarity of recognised faces must have frequently been offset by the pains of intimacy – of being known and, sometimes, envied and hated. Numerous historical studies have drawn on the paper trail of neighbourly denunciations – as in Robin Briggs’ work on the role of neighbourhood accusations in early modern witchcraft, or Emmanuel Le Roy Ladurie’s investigation of one Pyrenean village, Montaillou, through the Inquisition’s interrogations in the late 13th and early 14th centuries.

Much, in other words, depended on one’s social standing, reputation and credit. This meant what it does today: one’s purchasing power and ability to borrow. It also meant the currency of honour and moral rectitude. In a society in which there were no credit ratings beyond the opinions of one’s neighbours, reputation was all. The real question is not why witchcraft accusations happened, but why they didn’t happen more often.

Moving away from one’s hometown didn’t help. Many people took to the road in the late 16th and early 17th centuries and condemnation was quick to follow. William Harrison’s 1577 Descriptions decries the ‘vagabond that will abide nowhere, but runneth up and down from place to place’ as undeserving. In 1616 the preacher John Downame bemoaned his ‘promiscuous generation, who … know no kindred, no house or home’. Vagrancy became a crime, ostensibly because vagrants were thought to refuse to work, but also because wandering itself was dangerous. Wanderers were associated with the transmission of disease, but they were equally thought to be morally infectious. It all boiled down to the fact that these ‘masterless men’ were not known – no one could account for them.

In earlier years, I enjoyed my urban anonymity; the pleasantness of village life may come from having moved here in my socially respectable middle age. But should I turn wild in my 70s, let’s hope my fellow villagers don’t cry ‘Witch!’ 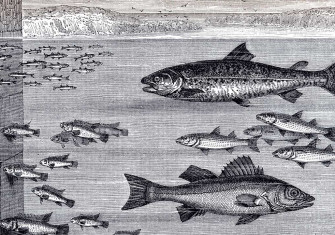