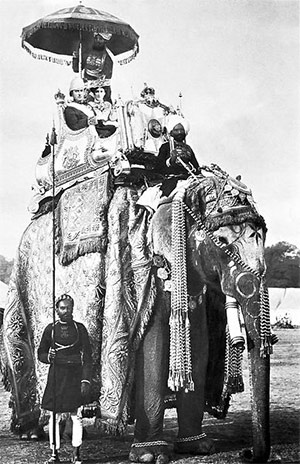 'The East is a university in which the scholar never takes his degree', George Curzon, Viceroy-designate of India, told an Old Etonian dinner in 1898. 'It is a temple where the suppliant adores but never catches sight of the object of his devotion... I know that I have everything to learn. I have, perhaps, many things to unlearn. But if the test of the pupil be application, and if the test of the worshipper be faith, I hope that I may pass through the ordeal unscathed.'

Brilliant, cultivated and witty, an elitist's elitist, Curzon had already been to India in the 1880s and 1890s and loved the country dearly, but he was also a convinced imperialist who believed in the benefits of Western civilisation. He would not escape unscathed.

The passage to India took three weeks and the newly created Lord Curzon of Kedleston arrived in Bombay in SS Arabia on December 30th, 1898, with his beautiful American wife and their two baby daughters. Greeted by an address from the Bombay Municipal Corporation, the Curzons drove through cheering crowds to a reception for 1,400 people who filed past them as they stood on a golden carpet. His first speech on Indian soil, in which he undertook 'to hold the scales even' between the British and the races, religions and interests of the land, went down well and he wrote home: 'the reception we receive everywhere is one of extraordinary friendliness and even enthusiasm'.

The Curzons sped across the country to Calcutta by train. The train drew up at the wrong place, the band omitted to play 'God Save the Queen' and the red carpet was the size of a postage stamp, or so Curzon complained, but he loved pageantry and his spirits rose as he and Lady Curzon passed regally in their state carriage through packed crowds in the cheerfully bedecked streets and past lines of troops in Dalhousie Square. The carriage drew up to Government House at ten minutes to five in the afternoon. By a remarkable coincidence, the building had been constructed a century earlier on the model of Kedleston, the Curzon family's stately home in Derbyshire, so as the salute of thirty-one guns crashed out over the city and the Viceroy-designate ascended the great stairway between a glittering throng of Indian princes in magnificent finery, army and navy officers in full fig, clergy and judges, officials and representatives of foreign powers, it was a strange kind of coming home. At the top of the stairs stood the outgoing Viceroy, Lord Elgin, and his staff.

The formal handover took place in the throne room of Government House on January 6th, five days before Curzon's fortieth birthday. His warrant of appointment was read out and he then escorted the departing Elgins to their boat on the River Hooghly. As well as a mass of work, an exhausting quantity of official entertaining awaited the Curzons, including a state ball, a state garden party for 1,800 guests and innumerable dinner parties. In that month of January, he calculated, Government House served a total of 3,500 meals. The fact that the kitchens were 200 yards from the house and all the food had to be carried over in wooden boxes slung from poles did not make entertaining easy, but 'all was novelty, brave hopes and high aspirations', Curzon wrote. Quite different were the emotions with which he would descend that same grand stairway of Government House in 1905, when he resigned after failing to get his way with Whitehall and the army under Kitchener. Curzon's arrival in India as Viceroy would prove to be the high point of his life, and from there the path led down.