Oxford beat Cambridge in the hundreth meeting on April 3rd, 1954. 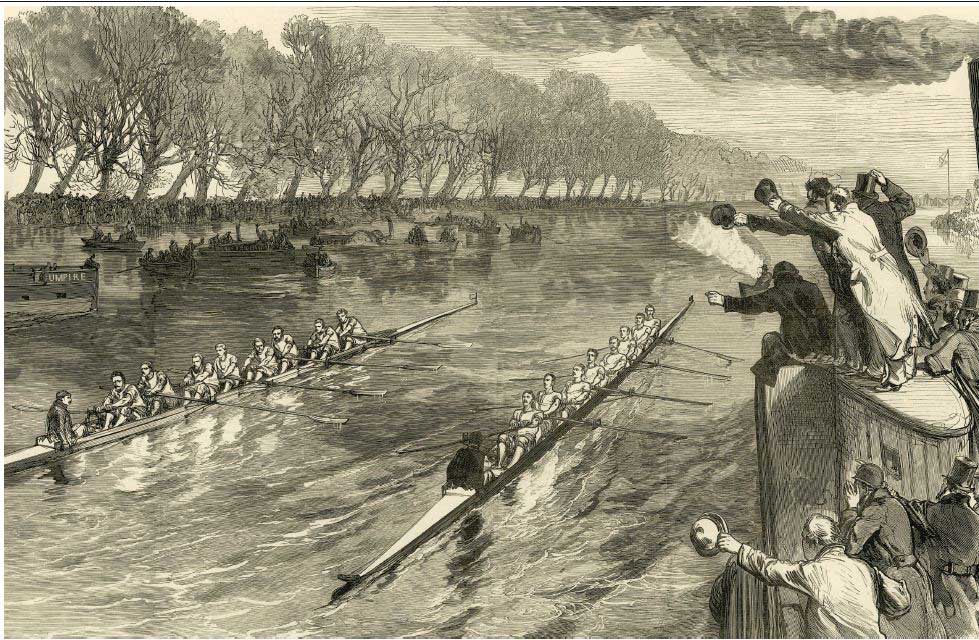 College boat races had begun at Oxford by 1815, but rowing was slower to develop at Cambridge, where the Cam was not much better than a sewer. It was the Cambridge University Boat Club, however, which took the initiative in challenging Oxford to the first university match at rowing in 1829. The prime movers were two Old Harrovian friends, Charles Merivale of Cambridge, who would end up as a beatifically idle Dean of Ely, and Charles Wordsworth of Oxford, the poet’s nephew, who had helped to found the university cricket match in 1827 and became Bishop of St Andrews. Both of them rowed in the race, which was held at Henley-on-Thames and attracted 20,000 spectators. The sporting press was agog, there was scarcely a room to be had in Henley for days beforehand and small boats swarmed on the river when the day came. There was heavy betting on Cambridge, but the two crews collided, the race had to be restarted and Oxford won comfortably.

In the early days the race was not held every year. It was not until 1856 that it became an annual fixture and there were no races during the two world wars, so the hundredth race was not until 1954. In the meantime the event had moved to London, from Westminster to Putney from 1836 and from Putney to Mortlake from 1845. The first broadcast running commentary came in 1927 and the first televised race was in 1938.

The race’s huge popularity has always been a mystery. As far back as the 1880s Charles Dickens the Younger disapprovingly reported that ‘cabmen, butcher boys and omnibus drivers sport the colours of the universities in all directions: the dark blue of Oxford and the light blue of Cambridge’, while ‘thousands and thousands of people go down to the river on the important day who do not know one end of a boat from the other... knowing perfectly well that all they are likely to see is a mere glimpse of the two crews as they dash by, perhaps separated by some boats’ lengths after the real struggle is over.’

Public interest was still as intense and the partisan taking of sides by spectators with no personal connection to either university still as sharp as ever when the hundredth race started from above Putney Bridge at 12.45pm. A stiff south-westerly wind was ruffling the water. Cambridge, the heavier crew, were the favourites, but Oxford, who had four Australians in their eight, won the toss and picked the Surrey station. Oxford jumped in front, but were only just ahead after Hammersmith Bridge when Cambridge were suddenly taken aback in Chiswick Reach by the head-on wind and rough water. The Times correspondent said that in less than a minute ‘the crew was virtually knocked to pieces’ and ‘it was as if their boat had come up against some invisible barrier, against which they beat ineffectively with their oars.’ They were never able to get back on terms and Oxford won by four-and-a-half lengths in a not particularly rapid time of 20 minutes and 23 seconds.