Numerous untruths have persisted about Gavrilo Princip, the man who killed Archduke Franz Ferdinand. One of them was used by Austria-Hungary as grounds for its declaration of war against Serbia in 1914. 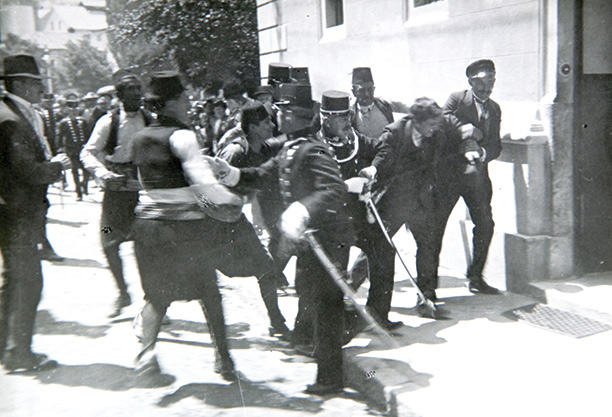 No other assassin, it may be argued, had a greater impact on world history than Gavrilo Princip, the gunman who triggered the First World War by killing Archduke Franz Ferdinand in Sarajevo on June 28th, 1914. But I would also maintain that no other assassin has had their story so mangled in the retelling.

We have been told by historians, some of whom have published in the run-up to the war’s centenary, that: Princip jumped on the running board of the archduke’s limousine to take his shot; the archduke’s wife was pregnant when she died in the shooting; it happened on the anniversary of their marriage; the car did not have a reverse gear so was incapable of correcting the driver’s error that delivered it to the assassin; the archduke bravely caught the grenade thrown earlier at the couple and tossed it nonchalantly away; and Princip stopped to eat a last sandwich at a corner café before emerging to take his shot.

All these details, and many more published over the last century, are untrue, fanciful, frothy nonsense. Perhaps Napoleon was right when he observed that history is nothing but the lies that are no longer disputed. The most egregious mistake is the famous photograph that purports to show Princip being bundled away by the Austro-Hungarian gendarmerie moments after the attack.

It has been used ad nauseam over the years and, sad to see, illustrates the cover of a new Cambridge history of the July Crisis. The problem is that it does not show Princip. It shows another man, an innocent bystander called Ferdinand Behr, being taken in for questioning. As Behr wrote in a 1935 statement, which today’s Wikipedia authorities would do well to read, he was always surprised by the muddle, as he stood over 6ft tall and was of solid build, difficult to confuse with the much slighter and shorter Princip.

It is fair to say that Princip, a peasant-farmer’s son from remotest Herzegovina, born at a time when Bosnia-Herzegovina was an outlying part of the Austro-Hungarian empire, is not the easiest historic subject to focus on. I have spent the last three years researching him and found that even his date of birth was difficult to establish. The Church authorities in Obljaj, the dirt-poor hamlet where he was born, wrote it in the parish record as July 13th, 1894. They, like the Princip family, were Orthodox Christians, an identifier that, in the vernacular of modern ethnic labelling, made them Bosnian Serbs and they wrote in Cyrillic. A second record, this time for municipal authorities more comfortable with the Latin script of the Habsburg occupiers, noted it as June 13th, 1894. To the non-Cyrillic reader, July and June are easily confused.

The difference was of no great significance until the assassination. Princip, arrested within seconds, could only face the death sentence under Austro-Hungarian law if he was 20 or more. If his birthday was in July, he would face nothing steeper than a jail term. If in early June, he could hang.

With the best legal minds available of the time focused on the issue, every avenue was explored. I found, in a tatty file held at the National Archive in Sarajevo, a scrap of paper with pencilled calculations converting the dates from the Julian calendar, which was routinely used by local Serbs and was then a little under two weeks out from the western, Gregorian calendar.

The Habsburg prosecutors wanted to make sure the accused did not miss out on the death penalty, if he really was 20 on the day of the shooting. In the end, a birth date of July 13th, 1894 was accepted by the court and Princip was jailed for 20 years. He died in prison of skeletal tuberculosis in April 1918, a few months before the end of the war his actions had precipitated.

So, going through archives in Vienna, Sarajevo, Belgrade and Istanbul, each detail about Princip had to be handled with care. Incredibly, I found items missed by others: graffiti left by Princip in 1909, his appearance in the Habsburg census of 1910 and, most thrillingly for me, his secondary school reports. These allowed me to build a compelling picture of a slow-burn revolutionary. He was not headstrong but thoughtful in his slow and deliberate move to radicalism. Clever, academic and disciplined, the reports chart him falling off the rails and into the hands of revolutionaries.

The most important historical discovery was that there was no evidence to support Vienna’s claim that Princip was an agent of Serbia, the grounds given in July 1914 for Austria-Hungary’s declaration of war on its small, troublesome neighbour. This was the key strategic act that drew in the Great Powers to four years of slaughter in the trenches, the multiplier that spun a localised Balkan assassination into a global conflict.

Yet there remain no reliable grounds in the historic record to justify Vienna’s claim. Princip spent a few months in Belgrade, capital of Serbia, and there he met extremist nationalists, who helped arm him and smuggle him back to Sarajevo. It does not follow that these extremists were backed, authorised or even known about by the Serbian government.

Vienna’s attack on Serbia had about as much legitimacy as a declaration of war by Britain on Ireland in retaliation for Louis Mountbatten’s murder in 1979 by Irish nationalists. The best evidence on record shows Princip not as a Serbian nationalist but as a Slav nationalist, committed to liberating all locals, known as South Slavs, whether they be Croats, Muslims, Slovenes or Serbs, then under the control of a foreign occupier, Austria.

It is an important difference that undermines completely the stance by the hawks in Vienna that an attack on Belgrade was justified retaliation for a Serbian plot to kill the archduke. Yet, just as with the incorrect photograph of the arrest, historians have often repeated these unproven claims to portray Princip as an agent of Belgrade.

Wilfred Owen wrote of the patriotic invocation dulce et decorum est pro patria mori as ‘the old lie’, but I have come to see an even greater lie that triggered the First World War. It is the lie used by Vienna in its deliberate misrepresentation of the Sarajevo assassination and the role of history’s most misunderstood assassin.

Tim Butcher is the author of The Trigger: Hunting the Assassin who Brought the World to War, published by Chatto & Windus.