Parting of the Ways

Lucy Chester examines the processes by which the Indo-Pakistan border was drawn, dividing a single country into two.

In early July 1947, Sir Cyril Radcliffe, a British lawyer, arrived in Delhi to chair the Boundary Commissions that would partition British India. Five weeks later he submitted his Boundary Awards to the Viceroy and flew home, leaving fierce and lasting controversy over the boundaries he had delineated. He also left behind one of the largest migrations in history, in which 10-12 million people fled from one side of the new borders to the other.

Recent events in Kashmir demonstrate that the Indo-Pakistani border is the world’s most serious potential nuclear trouble point. The long history of cross-border tensions between Hindus and Muslims, and the nuclear threat created by that mutual distrust, highlight the importance of the boundary issue. So what was the process by which Radcliffe determined the actual lines of partition?

To India’s British rulers, and to most Indian leaders of the 1940s, political discussion centered on religious categories. Jinnah’s Muslim League was pushing for a separate state for South Asia’s Muslims. The nominally secular Congress Party, led by Nehru, finally agreed to Jinnah’s demands on the condition that the new state take the form of two separate wings, formed by dividing the existing provinces of Punjab, in the north-west corner of British India, and Bengal, in the north-east. Religion was the only consideration explicitly recommended to the Boundary Commissions in their terms of reference. However, when British officials were confronted with the reality of partitioning India, it became clear that infrastructure questions were a close second. In some areas, Radcliffe gave these considerations more weight than he gave to the determination of religious majorities. Both Punjab and Bengal were criss-crossed with electrical lines, roads, and railways, but the extensive irrigation system that allowed the dry Punjab to be the breadbasket of South Asia made the Punjabi division particularly difficult for the Boundary Commission.

Following his appointment in March 1947 to head the Indian government as the last Viceroy, Mountbatten accelerated the time-frame for independence by announcing, on June 3rd, that August 15th, 1947, would be the date for the final transfer of power. Because the structure and personnel of the Boundary Commission had not yet been settled, this left only a few weeks to map thousands of miles of boundary. With time so short, British and Indian leaders finally agreed to establish two separate commissions, one for Bengal and one for the Punjab. Each consisted of four members, two nominated by the Muslim League and two by Congress, a format which lent itself to deadlock. All members were judges; none had any geographical expertise.

A single chairman was to be appointed to head both Commissions. Indian leaders insisted that this post be filled by someone without previous experience in India. Muslim League and Congress leaders agreed to nominate Cyril Radcliffe, who had a reputation for judicial brilliance and impartiality. The Commission’s instructions were deceptively simple. As announced on June 30th, 1947:

The Boundary Commission is instructed to demarcate the boundaries of the two parts of the Punjab [or of Bengal] on the basis of ascertaining the contiguous majority areas of Muslims and non-Muslims. In doing so it will also take into account other factors.

It seems clear that the principal concern of both Britons and Indians in the government was the category of religious identity. What ‘other factors’ indicated was less clear.

The Commissions held public hearings in July, to gather evidence. They then deliberated through the early days of August. Each member had strict orders not to compromise  over any piece of territory. One of the members of the Muslim Commission told Radcliffe, ‘It is not that I do not wish to make modifications, but I dare not. If I did, my life would be in instant danger’. In the end, Radcliffe made all of the controversial decisions by himself.

Boundary lines are essential to the existence of the modern nation-state. As one Asian historian notes, ‘a map of a nation presupposes the existence of boundary lines’. The map that Radcliffe drew, however, was less descriptive of a pre-existing reality than creative, enabling the invention of the two new nations of India and Pakistan. By the 1940s, well-established procedures governed the delimitation of international boundaries. However, the Radcliffe Commission was a judicial body, organised to hear proposals, and in using this structure the interim government ignored available precedents and guidelines. Contemporary texts on boundary-making warn against relying solely on maps and stress the importance of field surveys. Unfortunately, the deadline meant that the Commission did not have time to conduct any kind of local survey. Radcliffe was forced to base his decisions on census statistics, the testimony of interested parties, and maps, without ever having seen – let alone surveyed – the areas to be divided. Maps display only selected, and sometimes distorted, aspects of reality. A mapping expert noted in 1945 that neat boundaries may conceal inaccuracies, and argued that maps of religious demographics, in particular, are less precise than they seem. Demonstrating his awareness of these problems, Radcliffe included both a written and a graphic description of his boundary line in his Awards, and indicated that the written description took precedence in case of any discrepancy.

Over the years, observers have speculated on factors that may have motivated Radcliffe, including communal bias, pressure from Mountbatten, prevailing administrative borders, defence needs and existing infrastructure. One of the most contentious points during Partition was the canal headworks in the Ferozepore tehsil (sub-district) of Punjab. On August 8th, Mountbatten’s private secretary wrote to Evan Jenkins, the provincial governor, with a preliminary description of the Punjab boundary. This draft showed Ferozepore and its headworks going to Pakistan. When the final Award was released, Ferozepore was assigned to India. Infuriated Pakistanis were sure that Nehru and Mountbatten had pressurised Radcliffe to change his line; more recently, historians have argued that Mountbatten successfully persuaded Radcliffe to change the Ferozepore line at the last minute.

Whenever possible, Radcliffe used existing administrative borders. He does not seem to have attempted to create an easily defensible boundary. Such an effort might well have been hopeless anyway; in a 1946 memo, Field Marshal Claude Auchinleck, Commander-in-Chief of the Indian Armed Forces, considered the possibility of postindependence Indo-Pakistani conflict and concluded that there was no way to define a defensible frontier. Radcliffe himself repeatedly expressed hope that India and Pakistan could work together to solve some of the difficult infrastructure problems created by his boundary Awards.

The text of both Awards demonstrates the centrality of infrastructure considerations. Radcliffe discusses canals, headworks, roads, railways and ports before turning to population factors. In the Punjab Award, he explicitly states that ‘there are factors such as the disruption of railway communications and water systems that ought in this instance to displace the primary claim of contiguous majorities’. At one point, he even suggested that India and Pakistan operate an important Punjabi canal headworks jointly. However, Nehru made his objections to this proposal clear to Mountbatten, and Jinnah implied that he would prefer Muslim deserts to fertile fields watered by Hindus.

The irrigation systems and other infastructure of Punjab and Bengal were never intended to be divided. Just as no partition line Radcliffe could have concocted would have divided Hindus, Muslims and Sikhs neatly and painlessly, no partition line would have allowed Pakistan and India to operate their infastructure separately, without crossborder interference. On March 31st, 1948, the Arbitral Tribunal which dealt with disagreements over Partition ended its work. The following day, India closed down the Ferozepore headworks which controlled the Pakistani water supply.

The immediate repercussions of Partition were brutal. When the Indian Government finally announced the Boundary Awards, almost forty-eight hours after independence, the border forces in place were inadequate to stop the communal massacres. Violence was particularly severe along the new border areas, where as many as a million  died. The first Indo-Pakistani war broke out in 1948; both Pakistan and India sent troops into the princely state of Kashmir, north of Punjab, where they remain today. Subsequent wars in 1965 and 1971 have made it clear that Radcliffe’s lines were not neat divisions but restless frontiers.

Radcliffe’s emphasis on infrastructure can be traced to Britons’ own conception of their task in India, and of the legacy of their imperial rule. In a BBC address in October 1947, he said, ‘The gifts we brought were Roman . . . like the Romans, we built our roads, bridges, and canals and we have marked the land as engineers’. Lord Hastings Ismay, Mountbatten’s chief of staff, mourned the fact that the British Empire’s accomplishments – roads, railways, and irrigation canals – might be threatened by Partition.

The interim government had set itself an impossible task. There was no practical way to divide an infrastructure which was always intended to be supervised and maintained by a single administration between two hostile states, just as there was no way to make a neat division of religious groups who lived together for centuries.

Radcliffe’s boundaries were not based solely or even primarily on religious identity, but on a combination of factors, with infrastructure playing a key role. Pakistan was established as a home for South Asian Muslims, while India’s identity was bound up in its secular ideals. What are the implications for a nation-state when its boundaries are based not on its foundation myth of religious identity, but on a variety of specifically imperial concerns?

The larger question here is: can partition ever be used to divide territory along clearly religious or ethnic lines, or will other factors necessarily affect the way the new nation-states are mapped? In an era in which leaders increasingly turn to partition as a tool for the resolution of ethnic conflict – we must re-examine its effectiveness.

Lucy Chester  is a doctoral candidate in the Department of History at Yale University.

Bengal and Punjab - Before and Beyond 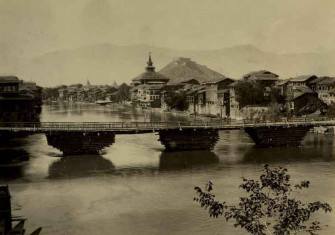