Ford's first automobile company didn't last long, but it was to have a lasting effect on his thinking. 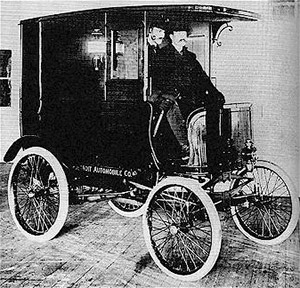 Henry Ford was thirty-six when a diminutive outfit grandly called the Detroit Automobile Company was founded to manufacture motor cars in the city. The first venture of its kind in Detroit, it had a paid-up capital of $15,000, with Ford himself getting his shares free. The greatest mogul the emerging automobile industry would produce was at this time chief engineer of the Edison Illuminating Company in Detroit, on a monthly salary of $100, married, with a five-year old son named Edsel.

Starting as a semi-literate farm boy from Wayne County, Michigan, he had put himself through an engineering apprenticeship in a succession of jobs. At one stage, aged eighteen, he worked a sixty-two-hour week in a machine shop, while, to earn a bit extra, repairing watches in a jewellery store six nights a week as well. Later he travelled round Michigan farms servicing Westinghouse steam engines.

Ford went to work for Edison in 1891. In his spare time at the plant he joined the ranks of thousands of other hopeful mechanics, inventors, dabblers and dreamers who were busy trying to put automobiles together in their backyards. Ford finished building his, which he called the Quadricycle, in a brick shed behind his Detroit apartment, at 1.30am on a June morning in 1896. With a two-cylinder petrol engine, a bicycle seat, a wooden chassis and bicycle tyres on its spindly wheels, it was steered by a tiller and had a house bell as a horn. It weighed only 500 pounds and had a top speed above 20mph, though rival machines rarely exceeded 5mph. Embarrassingly, the completed Quadricycle was too big to get out through the door of the shed and Ford had to demolish part of the wall with an axe.

Ford promptly began to build a bigger, tougher and heavier model, which boasted a comfortably padded seat, brass lamps, running boards and mudguards. It was already clear that reliability would be a key factor in a successful car and Ford’s test drive of sixty miles out to Pontiac in Michigan and back in his new machine in 1899 convinced a rich Irish-American lumberman named William H. Murphy to back his car-manufacturing business. Other investors included the mayor of Detroit, Senator Palmer of Michigan, members of the Peck family who owned the Edison firm, and several Detroit businessmen. The Detroit Automobile Company was born, factory premises were found at 1343 Cass Avenue and Ford left his job at Edison to take charge of production at the new firm, with a pay cheque of $150 a month. The new company did not last long and built only a dozen or so cars before going out of business in 1900. It was revived briefly the following year as the Henry Ford Company, but, to the dismay of his backers, Ford become temporarily obsessed with racing cars and was fired in 1902, when the firm became the Cadillac Motor Company. His first business venture had proved a false start.