The Computer in the Aegean

The Antikythera Mechanism is ingenious, intricate and highly sophisticated. But what is it?

In April 1900 a startled telegraph operator based in Athens decoded a signal reporting the discovery of a vast treasure trove beneath the Aegean Sea. Government authorities dismissed the message as a drunken hoax – but they were wrong. Some sponge divers stranded by a storm had unexpectedly swum into a wrecked ship packed with valuable relics from the distant past.

In this depressed period between the two Greco-Turkish Wars national morale was low and the ensuing archaeological investigations dominated the news for months. The tiny island of Antikythera, which had only recently acquired its Classical name, became the centre of a salvage operation that so far has recovered more than 300 items. Plunging down in five-minute bursts, untrained local divers retrieved a stunning collection of antiquities: glass vases, bronze statues, gold jewellery, marble sculptures – as well as a few human skeletons. The questions began immediately. How old was the ship, where was it heading, why was it carrying so many fine objects? Unsurprisingly, scholars ventured conflicting opinions. The current consensus judges it to have been a Roman vessel that foundered in around 60 BC, perhaps carrying looted booty but more probably being a commercial cargo carrier.

What turned out to be the most astonishing find was initially neglected. According to one anecdote – which may or may not be true – after several months of excavation an observant naval officer prevented a tired crew member from tossing one particular encrusted lump back into the water. Soon afterwards, this unprepossessing object split into three sections studded with incomplete circular scales and fuzzy inscriptions. For years nobody paid much attention to this crumbling heap of metal and stone fragments, even though a toothed gear had been spotted. It was not until 1959 that a scholarly article made an extraordinary claim: that these remnants originated from an ancient computer. Since then, experts from all over the world have dedicated years of research to unravelling the secrets of the Antikythera Mechanism.

To date 79 pieces have been rescued to supplement the original three large ones, which are prosaically known as Fragments A, B and C. The task of fitting them all together resembles tackling a three-dimensional jigsaw without having a picture of the completed object and when roughly two-thirds of the bits are missing. Experts still disagree on both its place and date of origin, but the current front-runner is Rhodes around 100-150 BC.

Yet although many of the device’s mysteries remain unresolved, its technological sophistication indicates that it was not the only one to be created. The debates about this extraordinary object show little sign of abating.

As the Nobel laureate Richard Feynmann exclaimed, it seems ‘so entirely different and strange that it is nearly impossible’. Despite continuing academic divergence, there is agreement on one key point: the discovery of the Antikythera Mechanism has revolutionised technological history. However fiercely enthusiasts may argue about its precise age, this enigmatic device undoubtedly predates by hundreds of centuries the medieval astronomical clocks that had previously held the record for antiquity. Nobody had realised that Greek craftworkers were capable of such fine metal work and intricate gear construction.

On permanent display in Greece’s National Archaeological Museum, the corroded instrument is too delicate to be moved out of its protective glass case. Roughly a foot across, it was probably transported inside a wooden box and comprised numerous pointers, scales and rotating dials operated by at least 30 gears, although there are clearly many missing parts. Technical articles bristle with mathematical diagrams and scholarly terms unfamiliar to non-specialists, including parapegma, exeligmos dial, saros spiral, metonic cycles, calippic calendars and the Greek names for the Egyptian months. Yet the toughness of the challenge has not deterred numerous archaeological sleuths, who have been guided by a long inscription on the inside of a protective metal plate that seems to be an instruction manual. Even so, after over a century of academic arguments, it remains frustratingly unclear who used this machine and why.

The Antikythera Mechanism is popularly labelled the oldest computer in existence, although of course no electricity was ever involved. Most modern computers operate digitally by manipulating strings of zeroes and ones. In contrast, analogue machines such as the hand driven Antikythera Mechanism represent reality by modelling the world with physical quantities, rather as a thermometer measures temperature by the height of its mercury column, or the internal gears of a mechanical clock rotate the hands through a distance proportional to the interval that has elapsed. Formerly in widespread use, analogue components are currently making a computing comeback as they hold out the promise of offering lower energy outlay and faster calculations.

Around three centuries ago Benjamin Franklin famously decreed that time is money, but pre-industrial societies lacked the modern obsession of measuring out the passing minutes and seconds. Instead, they built machines that were designed to model the cosmos and predict significant astronomical events, such as eclipses. Within a few years of its discovery, rival experts were hazarding various answers to a bevy of questions. Did the Antikythera Mechanism just track the sun and the moon or was it geared up for the planets as well? Where and when was it made? Had it been influenced by Babylonian ideas? How could it be accommodated within existing knowledge of Greek culture and achievements?

Technologists were not the only experts reinterpreting the past: Classicists scoured ancient texts for references to similar devices. In around AD 500, a royal servant called Cassiodorus wrote a letter enthusing about the skilled artisans who had:

set in revolution a little machine, pregnant with the cosmos, a portable sky, a compendium of all that is, a mirror of nature … What a thing it is for a human being to make this thing, which can be a marvel even to understand.

And there is a tantalising description by Cicero of an ingenious artefact designed by Archimedes:

This kind of sphaera, in which were present the motions of the Sun and Moon and those five stars [the known planets] that are called wanderers and as it were straying, could not be fashioned in that solid sphaera, and one had to wonder at the inventiveness of Archimedes in it, that he had figured out how a single revolution could furnish unequal and diverse courses in unlike motions.

Eighteen such quotations have been identified, suggesting that similar instruments existed, but so far its nearest companion is a Byzantine sundial calendar of AD 400 600, currently at London’s Science Museum. Four parts survive, enough to show that it could have been used in any of the 16 locations inscribed round its edge. Like the Antikythera Mechanism, this geared instrument confirms that ancient artisans possessed far greater technological skills than previously suspected.

The investigations have already lasted for about 120 years and divide neatly into two phases. During the first half of the 20th century, researchers made various ingenious proposals based on surface evidence only. Progress accelerated rapidly from the 1970s, when new scientific imaging techniques began probing deep inside the metal fragments to reveal inscriptions that had hitherto been indecipherable or even invisible.

The Antikythera Mechanism survived the Second World War stored in cigar boxes inside the museum’s basement. In 1958 a former physicist called Derek de Solla Price carefully unpacked all the bits and examined them carefully. He was stunned by what he found. It felt, he later remarked, ‘like opening a pyramid and finding an atomic bomb’. Contradicting some earlier suggestions, he insisted that this was no mere navigational instrument but a ‘wondrous device’: an ancient computer. Before long, ancient Greek technology was hitting the international news.

Almost 20 years later Price returned to the puzzle, this time armed with modern x-ray equipment that revealed several unsuspected gears and enabled him to begin mapping their intricate interconnections. He eventually became convinced that the instrument could display the motion of the sun and the moon but not of the planets – but that opinion was subsequently overturned by Michael Wright, a curator at the Science Museum, who adapted a sophisticated piece of medical equipment to detect even finer details invisible to the naked eye.

Wright realised that what had been taken for concentric rings on the back of Fragment B were in fact one continuous spiral and he convinced the experts that Price had been wrong: the Antikythera Mechanism could indeed be used for calculating planetary movements. He even built small wooden models that demonstrated how it might have worked, yet within only a few years, opinion flipped again. By then, further substantial fragments labelled D to G had been recovered and new types of high-resolution imaging machines were set on the case. A large international team modified Wright’s version to demonstrate how different gearing structures could represent cycles used for predicting eclipses.

That model is now widely accepted – including by Wright – although the saga has by no means reached its end; the full power of modern technology seems insufficient to prise open the secrets of a small object that is over 2,000 years old.

As more pieces have been retrieved and investigative techniques have improved, so many features have been revealed that the device can seem dauntingly able to multi-task. The most recent reconstructions imagine a gleaming metallic display of rotating dials bearing coloured markers and several pointers resembling clock hands. Earth lies at the centre, with the main celestial bodies – Mercury, Venus, the sun, Mars, Jupiter and Saturn – arranged in rings around it. Tracking the positions of the planets would have been mathematically far simpler if the sun had been placed in the middle instead: when viewed from Earth some planets appear to move backwards from time to time, which was extremely hard to explain before Nicolaus Copernicus redrew the solar system. Yet somehow these Greek technicians worked out the right answers for the cycles of Venus and Saturn.

This little instrument not only predicted eclipses, but also calculated the phases of the moon, the movements of prominent stars and the revolutions of the planets – although not with accuracy. In addition, the Antikythera Mechanism possessed a more terrestrial application; it could calculate dates for the Olympiad.

Paradoxically, such impressive flexibility makes it even harder to answer the basic question: what was the Antikythera Mechanism used for? It must have been expensive to construct. What sort of person would need all the options it offered? The Olympiad dial is an appealing feature, but surely the organisers of the games could count in four-year intervals without the help of such a complex device? Similarly, even though it was found on a ship, navigators already had accurate instruments that would have been far easier to use. The most likely answer is that the Antikythera Mechanism was an educational artefact intended for teaching the basics of astronomy to small groups of students.

The Antikythera Mechanism was ingenious, but it was not intended to provide a model of how the universe operates. Its manufacture was not linked to philosophical discussions about cosmic forces. But, as well as describing the physical movements of celestial objects, it also paid great attention to their impact on society. It provided an insight into the coordination of celestial and earthly phenomena: comets and eclipses were interpreted as omens. Not the stars but the gods danced to the music of time in ancient Greece.

Patricia Fara is an Emeritus Fellow of Clare College, Cambridge. Her most recent book is Life after Gravity: The London Career of Isaac Newton (2021). 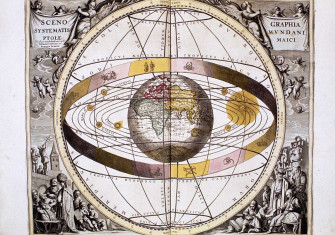 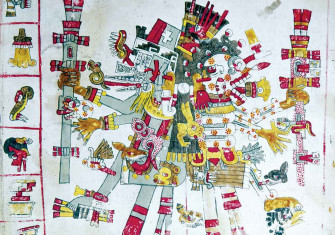