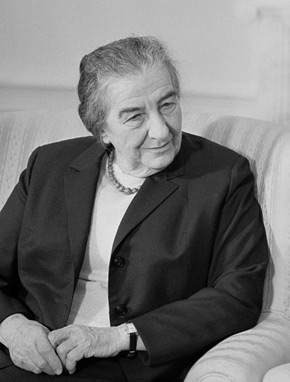 Israel’s own imperious ‘iron lady’ and first woman prime minister once said: ‘It was not as though there was a Palestinian people considering itself Palestinian and we came and threw them out and took their country away from them. They did not exist.’ Asked when she thought the Arab problem would be resolved, she said: ‘When the Arabs love their children more than they hate us.’ David Ben-Gurion used to call her the best man in his government.

She started life as Goldie Mabovitch, born to a Jewish family in the Ukrainian city of Kiev in 1898. Her Russian childhood left her, she said, with ‘no happy or even pleasant memories’, but the family emigrated to the United States and from 1906 lived in Milwaukee, Wisconsin, where her father had a job as a railroad carpenter, her mother ran a grocery, and she went to school. A convinced Zionist from an early age, she married a sign-painter named Morris Myerson and in 1921 she and her husband left for Palestine where they lived in a kibbutz which Myerson hated. They had two children but the marriage broke up and Myerson died in 1951.

By that time his tough-minded former wife had risen high in Israeli politics. As head from 1946 of the political department of the Jewish Agency, which represented the Jews to the British authorities, she worked for the many Jewish refugees who had fled Europe for Palestine in violation of British immigration rules and for the release of leading Zionists who had been arrested. She was 50 when she became one of the signatories of Israel’s Proclamation of Independence in Tel Aviv’s art museum in 1948 when she found herself close to tears and remembering her schooldays when she had scanned the names of the men who signed the American Declaration of Independence. Elected to the Knesset, the Israeli parliament, in 1949 she was briefly her country’s first ambassador to Moscow, holding Israel’s first-ever passport. She was minister of labour from 1949-56 and foreign minister from 1956 until 1966. By then she had Hebraicised her married name to Golda Meir.

She supported the prime minister, Levi Eshkol, in party conflicts and when he died in 1969 the party pressed her to succeed him on a temporary basis even though she was 70 and officially retired. She moved into the prime minister’s residence in Jerusalem and began to get used to ‘the permanent presence of police and bodyguards, to a work day of at least 16 hours and to the minimum of privacy’. She lasted until 1974, when she resigned after being heavily criticised over the Yom Kippur War. When she died in Jerusalem in 1978, she was 80 and it was revealed that for the last 12 years she had been suffering from leukaemia.