Attempts to regrow the Glastonbury thorn after it died in 1991. 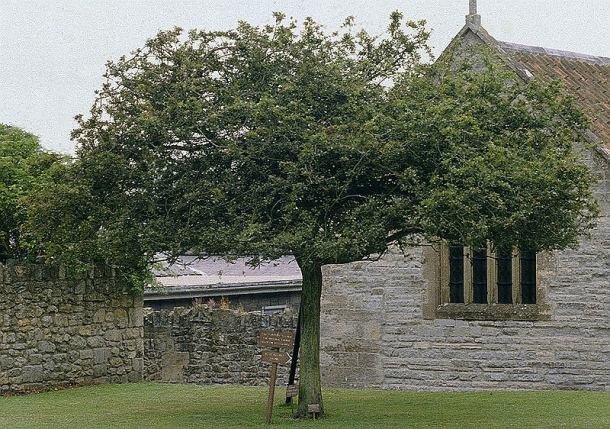 Until recently, the Glastonbury Holy Thorn, famous for its Christmas blossom, stood in front of St John the Baptist’s Church in the centre of the Somerset town. Several times the vicar of Glastonbury had sent blossoms to the Queen at Christmas time. But it was pronounced dead in June 1991, and tree surgeons cut down the tree the following February.

Many have tried to grow the Glastonbury Holy Thorn, Crataegus monogyna var. biflora, from seed and direct cuttings, but in recent years all attempts have reverted to the normal hawthorn type, flowering only in spring.

The large tree had been in the churchyard for eighty years. It was planted by Mr George Chislett, then head gardener of Glastonbury Abbey. He also learned how to graft Holy Thorn cuttings onto the root of blackthorn stock, and so preserve the ‘miraculous’ Christmas blossoming characteristic. His son, Wilf, sent Holy Thorns all over the world, including to Washington, Canada, New Zealand and Australia.

Luckily, trees survive from earlier graftings to perpetuate the Glastonbury legend, among them two other Holy Thorns in the grounds of St John’s. In recent years, the blossom sent to the Queen has come from one of these. The old custom of sending blooms to the monarch had been stopped by Charles I, but was revived in 1922 when Queen Mary agreed to receive a sample each time the Holy Thorn lived up to its reputation.

The tradition began when Thomas Cromwell, chief adviser to Henry VIII, sent a Dr Layton to Glastonbury in 1535 to investigate rumours concerning the tree. The doctor sent back to London ‘two flowers wrapped in black sarsnet, that in Christmass Mass, at the very hour Christ was born, will spring and burgeon and bear blossoms’.

The legend of the Holy Thorn concerns Joseph of Arimathea who cut a staff from the same tree the Roman soldiers used to make the mocking crown of thorns they placed on Christ’s head. Later, Joseph led a party of merchants on a tour of tin mines in Somerset. He carried the staff, and when his party climbed a grassy hill on the Isle of Avalon, Joseph is said to have stopped, stuck the staff in the ground and sat down to rest saying, ‘We are weary all’. When they moved off, Joseph inadvertently left the staff in the ground, where it took root and eventually grew into the original Glastonbury Holy Thorn.

Today, the hill lying in the shadow of Glastonbury Tor bears the name Wearyall Hill, although this is more likely to derive from ‘Wiral’ or ‘Wyral’, a place name appearing on many old maps.

The earliest reference to the Holy Thorn appears in a thirteenth-century history of Glastonbury Abbey, but this does not mention the miraculous Christmas blooming. Dr Layton’s letter is the first recorded mention of this, after which the fame of the Glastonbury Thorn gradually spread, attracting pilgrims and becoming part of English folklore.

At Glastonbury, the tree was watched carefully every Christmas to see if the blossom appeared. After it had grown two trunks, a local superstition warned against ‘cutting the Holy Thorn on Christmas Eve when you hear the buds cracking, or you will receive a curse’. Apparently this stemmed from the fate that befell a fanatic who had chopped down one of the trunks during the reign of Elizabeth I. But when the man tried to chop the second trunk, ‘thorns flew into his eyes and blinded him’.