Getting the Measure of Ancient Rome

A new online resource opens up possibilities for interpreting the infrastructure of the Roman world, says Jasmine Pui. 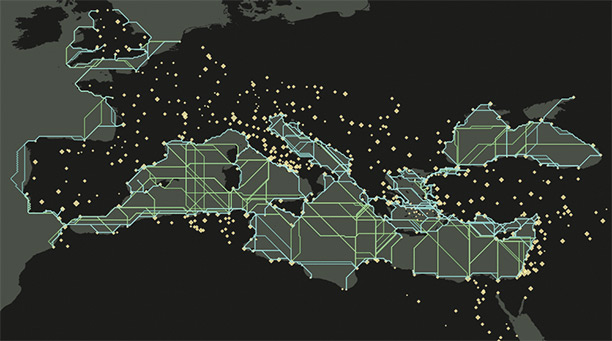 A recently launched online interactive research source, ORBIS, the Stanford Geospatial Network Model of the Roman World, has made it possible to analyse data about the Roman Empire in new ways that reveal the fragility of Roman communication and freight systems. Conventional maps are often unable to capture the environmental constraints that govern the flows of people, goods and information. Museum and ancient sites usually include titbits of information about the wide-ranging origins of artefacts, hinting at the relative cost of goods and labour in the Roman era, but factors such as sailing times and inland routes for freight cannot be precisely revealed through archaeological finds, Roman coins, taxation records or riot reports.

The first resource of its kind, ORBIS offers comprehensive graphic tools to portray the transport and communication infrastructure that underpinned the Roman Empire’s existence. By typing in a starting point, destination, an imagined weight of goods to transport and the time of year, the site shows whether such a movement would have been feasible and at what cost. Studying movement during the course of the empire’s existence suggests it was far more difficult to hold an empire together than to expand one. There are few scenarios where marching and conquering is not easier and less costly than moving goods and slaves between regions. Cost, rather than distance, was the principal determinant of connectivity in the Roman world.

ORBIS is based on a simplified version of the giant network of cities, roads, rivers and sea lanes that framed movement across the Roman Empire. The Stanford team has relied on data such as historical tide and weather information, size and grade of road surfaces and an average walking distance of 30 kilometres per day. Hundreds of cities, ports and routes, vehicle speeds for ships, ox carts and horses, as well as the variable cost of transport have been logged. The data mainly focuses on the period around AD 200, when Septimius Severus expanded control of Africa and Roman power was at one of its peaks.

By simulating movement along the principal Roman road routes, the main navigable rivers and sea routes in the Mediterranean, Black Sea and coastal Atlantic, ORBIS reconstructs the possible duration and financial cost for a wide range of modes of travel and trade in antiquity. Drawing on print resources, such as the Barrington Atlas of the Greek and Roman World and the Pleiades project, which maps the latitude and longitude of ancient sites, ORBIS models how people and goods were constrained in their movement depending on times of year and choice of fastest or cheapest routes. An ORBIS visitor can traverse over 84,631 kilometres of road, including desert tracks, and 28,272 kilometres of rivers and canals, using 14 modes of road travel from camel caravan to military march and accurate, normative sailing times.

By entering ‘arguments’ for how people could have arrived at the cities and major settlements that allowed for maritime transport, the ‘dynamic distance cartogram’ changes according to the criteria selected, rearranging the spatial relationships in the map. Thus we can see how settlements most likely grew according to trade requirements and available transport technologies. The odds of successful delivery of grain and staples to feed Rome and the armies were lower in rough Atlantic seas during the winter compared to inland transport, but the price to time cost ratio was cheaper nonetheless. ORBIS demonstrates that the Roman Empire had to expand in keeping with cost, generally moving from easiest-to-reach to costlier-to-reach destinations.

The Stanford team discovered that freight charges set for many Roman sailing routes were directly related to sailing times. Other empires that focused on land-based expansion and political control but possessed some oceanic transport capabilities, focused freight charges on cargo value. Speed of political change was important in many situations, but Roman imperial expansion was often constrained by the cost of transport.

The project also revealed just how little evidence we have about Roman transport speed, costs of sea vessels and speeds of river boats. Data was also limited on price fluctuations, the only reference coming from Emperor Diocletian’s edict of 301, which was intended to curb inflation. Nevertheless, ORBIS reveals correlations between transport networks and Roman decline. For example, it shows the splintering empire centralising around Milan and Constantinople after 476, predictably to maintain control and in response to the available transport technology and goods. ORBIS demonstrates the challenges faced by the empire, such as how to maintain economic hegemony without proof of delivery of goods, slaves or correspondence. The speed of transmission of the Plague of Justinian, which wrought havoc on the eastern empire in 541-542, can also be estimated based on the fastest sailing routes from the origin of the outbreak in Pelusium, Egypt.

ORBIS is a flexible tool that can be used as a massive online textbook, a syllabus, or as a stimulus for debate and new research questions, in ways that static citations cannot. Almost all the text and statistics can be downloaded from the site for use in scholarly works. The creators hope that visitors will treat this system, still in its development stages, both as an aid to research and as a scholarly work in its own right.

Jasmine Pui writes about events and technologies that build and sustain civilisations.