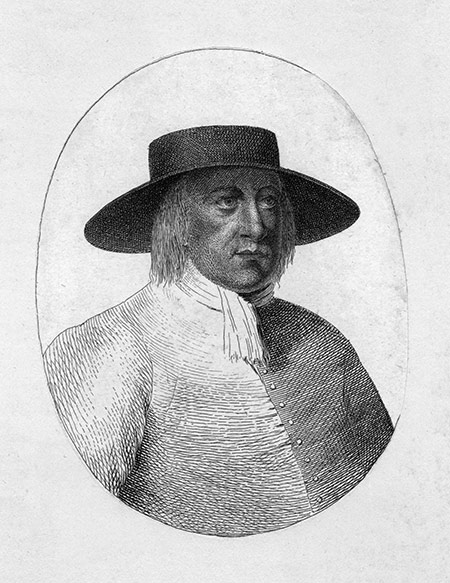 The street in Fenny Drayton, the Leicestershire village where the founder of the Quakers grew up, is now called George Fox Lane in his honour. He was the son of a prosperous weaver, who was a churchwarden of the solidly puritan local parish. He later recalled that he had been an exceptionally serious boy, ‘of much gravity and staidness of mind and spirit’. He was deeply religious, but he became equally deeply uncertain about Christian doctrines and values.

From the age of 19 in 1643, with the Civil War raging in a period of upheaval and uncertainty, young Fox spent much of his time for several years wandering around the Midlands, keeping to areas under parliamentary control, talking to puritan ministers and others to try to clear his own mind. He had been a cobbler’s apprentice for a time and so could earn money to support himself. He grew increasingly dubious about the Church of England and suffered from severe fits of depression, until at last in 1647 he heard a voice that told him: ‘There is one, even Christ Jesus, that can speak to thy condition.’ His heart, he said, ‘did leap for joy’.

The experience finally convinced him that no notice should be taken of established teachers and practices. The believer should rely on the Bible, but even more on his own inner guide, which came direct from God. He rejected the doctrine of the Trinity and all church rituals and he advanced religious and social opinions more radical and individualistic than even most puritans accepted. He disapproved of swearing oaths and paying clergy and he was a pacifist. He frowned on titles and class distinctions, the theatre and maypoles. It was not necessary to go to a building to worship; it could be done in the open fields because God is everywhere.

Believing in simplicity, wearing plain clothes and using straightforward speech and manners, Fox began to go about preaching his message in the Midlands and in the northern counties, in Westmoreland, Lancashire and Yorkshire. Now magnetically self-confident, he began to attract followers, some of whom would travel with him at times to form a varying group of missionaries. From the 1650s there were Quakers in London. His emphasis on following one’s own inner guide inevitably caused disagreements and desertions, but still numbers grew.

Fox several times found himself in prison for blasphemy. He and his followers began to be called Quakers, after a judge in Derby in 1650 mocked his exhortation to ‘tremble at the word of the Lord’. They referred to themselves as Children of the Light or Friends of the Truth (the Society of Friends came much later). Organised Quaker congregations were now holding regular meetings, but persecution of them grew worse after the collapse of the Commonwealth regime and the restoration of Charles II in 1660. Fox began to look abroad and over the next decades he travelled to Ireland, the Caribbean, North America and the Netherlands to spread his message. William Penn, a close ally, founded the American colony of Pennsylvania in the 1680s as a refuge for Quakers. Persecution eased off with the Act of Toleration of 1689 after William of Orange had become king.

Meanwhile, in the 1650s Fox had inherited a legacy from his father which made him financially secure and in 1669 he had married Margaret Fell, a Quaker widow with eight children, who, for the rest of his life, was a key missionary, organiser and influence on him. She helped to convince him that women should have equal treatment with men and he was a kind stepfather. About 1675 he dictated his memoirs, which were published as his Journal after his death.

In his latter years Fox lived in or near London, staying with friends, preaching at meetings and attending committees. The oldest meeting house in London was off Gracechurch Street, not far from the Guildhall, and on January 11th, 1691 Fox preached at the meeting there. Afterwards he said a feeling of cold had struck his heart and he retreated to bed at the nearby house of a Quaker he had stayed with before. To anxious friends at his bedside he said: ‘All is well. The seed of God reigns over all and over death itself.’ He died in the evening two days later of heart failure, aged 66.

Many Quakers and other Nonconformists had been interred in the Bunhill Fields burial ground to the north of the City, because it had never been consecrated and so they did not have to use the Prayer Book. On January 16th thousands accompanied Fox’s coffin as it was carried there and buried. The sect he had founded would spread to the whole world.