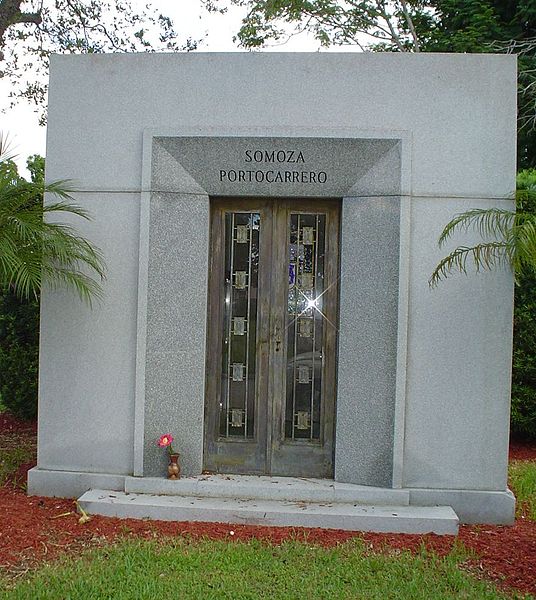 In the early 1930s the politics of Nicaragua were in turmoil and the country was occupied by the United States Marines. The man who would grasp the opportunity to take control, impose order and enrich himself on the spoils was a 40-year-old army general, Anastasio ‘Tacho’ Somoza. He had strong support from the United States and in 1939 President Franklin Roosevelt is alleged to have said: ‘Somoza may be a son of a bitch, but he’s our son of a bitch.’ Even if he did not say it, it expressed the American attitude.

Somoza was the son of a wealthy coffee planter. Partly educated in Philadelphia, he spoke fluent English, which was a substantial advantage in dealing with the Americans. Another was that his wife Salvadora came from a prominent Nicaraguan family which put him at the heart of the country’s politics. A guerrilla war was being waged against the Americans, led by a popular left-wing nationalist, Augusto César Sandino. The marines withdrew in 1933, but they had taken care to train a combined military and police force, the Guardia Nacional, to safeguard US interests; American pressure persuaded the Nicaraguan president to put Somoza in command of it. Sandino, who demanded the reform of the ‘unconstitutional’ Guardia, was ambushed after a banquet in the capital, Managua, in February 1934, taken to the airport and shot by Guardia soldiers on Somoza’s orders.

Two years later, in May 1936, after building up his influence and successfully infiltrating his own people into many government posts, Somoza organised an armed uprising. The Guardia seized the town of León and attacked Managua. The weakling Nicaraguan president, Juan Batista Sacasa (who was Salvadora Somoza’s uncle), resigned and a Somozan puppet was installed as a temporary replacement in June. A rigged election for president followed in December, which Somoza won by the remarkable margin of 107,000 votes to fewer than 200 for his sole opponent.

With American backing Somoza ruled Nicaragua as president or through puppets for the next 20 years. He appointed relatives to key positions, controlled elections and the military, drove opponents into exile and modernised the economy, which had been lamentably dependent on bananas. Forests were cleared, cattle ranches and cotton plantations expanded. The Guardia ran a huge range of activities, from postal services, telecommunications and health, to gambling and Somoza built himself a towering fortune. Attending a party in León in 1956, he was shot in the chest by a young Communist poet and died a few days later in an American hospital in Panama at the age of 60. His sons and their clique continued to run the country until the Sandinista uprising brought them down in 1979.