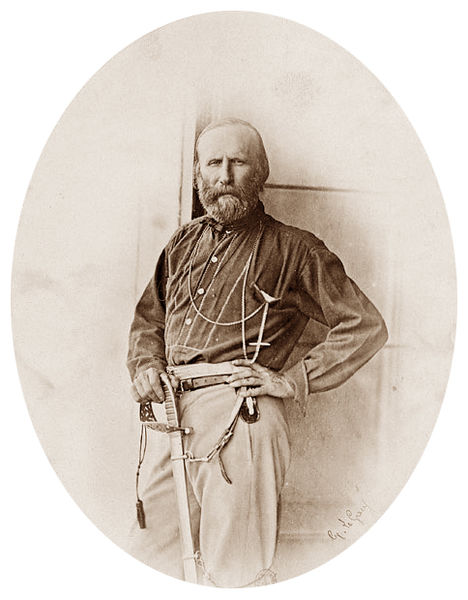 Italy remained a patchwork of small states after the post-Napoleonic settlement of Europe in 1815, which gave back the Papal States to the pope and restored the House of Savoy to the kingdom of Piedmont-Sardinia and a branch of the Bourbons to the Two Sicilies (Naples and Sicily). The Austrian Habsburgs took control of Lombardy, Venice and other cities in the north, but an Italian drive for unity and freedom from foreign control would eventually prove irresistible.

The great hero of the struggle, Giuseppe Garibaldi, aroused as much alarm in the breasts of its principal beneficiaries as he did in his enemies. He was feared as a human hurricane who might destroy everything in his path. To make it worse, he was hugely popular. It was Garibaldi who made Victor Emmanuel II of Piedmont the ruler of a united Italy, while the king stood ever ready to disavow him.

Born in 1806 and a sea captain in his youth, Garibaldi spent from 1834 to 1848 exiled in South America where he fought in various liberation struggles and mastered the techniques of guerrilla warfare that he later deployed so effectively in Sicily and Italy. For the rest of his life he swaggered about in the gaucho costume of a South American cowboy. Returning to Europe, in 1849 he commanded a brilliant, if doomed, defence of Rome against the French, but was forced abroad again. From 1854 he settled to farming on the island of Caprera, off Sardinia.

But in April 1860 a rebellion erupted in Sicily and Garibaldi seized the opportunity, sailing from Genoa with a force of volunteers known as ‘the Thousand’ or ‘the Red Shirts’ in two steamships. Victor Emmanuel and his chief minister, Count Camillo Cavour, had agreed to back him if he was successful, on the understanding that they would deny any connection with him if he failed.

With help from Royal Navy vessels, Garibaldi and his men landed at Marsala on Sicily’s west coast on May 11th. They quickly took the town and assembled the town council, which declared Bourbon rule of Sicily at an end and called on Garibaldi to take over as dictator in the name of King Victor Emmanuel. Garibaldi accepted. Joined by hundreds of Sicilian rebels – many of whom contented themselves with firing their guns in the air and bellowing rather than actually fighting – he led his army towards Palermo. There was a battle at Calatafimi, where Garibaldi reportedly said ‘Here we make Italy or die’ and the Garibaldini put superior numbers of regular Neapolitan troops to flight. The victory sparked a powerful surge of Sicilian support for the invaders, who pressed on to the Sicilian capital.

Forcing a gate in the early hours of May 27th, the Garibaldini swarmed in. The population rose in support and fierce fighting raged in the streets. Garibaldi organised a committee of leading citizens to run the city, while he himself deliberately spent much of his time receiving messages and issuing his orders from a command post beside the grand Renaissance fountain in the central square, the Piazza Pretorio, where he was a target for repeated enemy fire. Many of the townspeople thought the little whip he casually twirled in his hand miraculously kept him safe. The effect on his supporters’ morale was exactly as he had calculated.

The Neapolitan garrison under the elderly and entirely outclassed General Ferdinando Lanza was gradually confined mainly to the area round the Royal Palace. By May 29th the palace itself was threatened and on the 30th Lanza sent a message to Garibaldi suggesting a parley. Garibaldi, who was now almost out of ammunition, gladly arranged for a brief armistice and a conference to begin at noon. The armistice was prolonged while Lanza worried and hesitated over what to do until at last on June 6th he capitulated and the Neapolitans marched out the next day with full military honours.

The seizure of Palermo confirmed Victor Emmanuel and Cavour in their decision to back Garibaldi. He moved eastwards across Sicily and took Messina, crossed to Calabria in mid-August and drove on to Naples, which he entered on September 7th. Cavour was now using the threat of a takeover by Garibaldi to persuade the European powers to back Victor Emmanuel. The Piedmontese army had already invaded and annexed the Papal States. The following month, October, Garibaldi organised a plebiscite that by a predictably gigantic majority handed Naples and Sicily over to Victor Emmanuel. Refusing all rewards, Garibaldi withdrew to the background and Victor Emmanuel was proclaimed King of Italy by the new Italian parliament in March 1861.

Garibaldi led occasional campaigns for Victor Emmanuel up to 1871, but then retired to Caprera. Crippled by wounds and rheumatism, he died there in 1882 at the age of 74.