Richard Cavendish marks the anniversary of the union of two branches of the Roosevelts, on March 17th, 1905

The bride and groom were both surnamed Roosevelt and the marriage united two branches of the family, comfortably moneyed and settled in New York City and upstate at Oyster Bay and Hyde Park. The bride was the niece of President Theodore Roosevelt, of the Oyster Bay branch, the daughter of his younger brother Elliott, an alcoholic, womaniser and general failure. Her father adored her and was adored in return, but she was a severe disappointment to her lively and beautiful mother, who thought ‘Little Nell’ plain, serious and boring. When her mother died in 1892, Theodore Roosevelt’s wife said sadly of the eight-year-old Eleanor, ‘I do not feel she has much chance, poor little soul.’ Her father died two years later and she lived with her maternal grandmother, along with her Uncle Valentine, who in drunken rages fired his rifle out of his bedroom window, and her Aunt Pussie, who seemed permanently involved in tearfully incoherent romances.

Franklin was the scion of the Hyde Park Roosevelts. His mother was a Delano, of a French Huguenot family (originally de la Noye) which had made a large, if now rather embarassing, fortune trading in opium and then married into the Astor dynasty. As a boy he made himself a skilful sailor and boat-handler, and later on in politics, as his biographer Conrad Black remarked, Franklin knew how to tack. He wanted to go to the Naval School at Annapolis for a Navy career, but instead was sent to Groton and Harvard, where he was not popular.

What drew Franklin and Eleanor to each other, no one could understand. They met in 1902 and saw each other at parties and dances, and in November 1903 Franklin told his mother that he and Eleanor were going to marry. Taken aback, she said they were far too young and made him promise to keep the arrangement quiet for a year. Meanwhile she introduced him to as many other girls as possible, but the engagement was formally announced at the end of 1904.

The pair were married in New York City by Endicott Peabody, headmaster of Groton, at the home of Eleanor’s grandmother on East 76th Street. It was the afternoon of St Patrick’s Day and the vows were drowned out by the Ancient Order of Hibernians bellowing ‘The Wearing of the Green’ as they paraded by outside. President Roosevelt gave the bride away and was inevitably far more the focus of attention than the happy couple. The bride was twenty-one and the groom twenty-three. Eleanor’s sex education seems to have consisted of her sardonic cousin Alice, the president’s daughter, reading the Old Testament ‘begat’ passages aloud to her. After a week’s honeymoon at Hyde Park the newlyweds settled in a New York City apartment. They had forty years of married life to come until Franklin’s death in 1945. 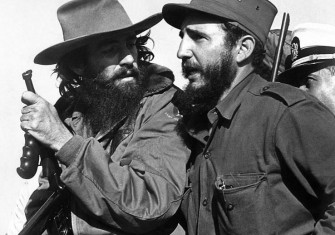 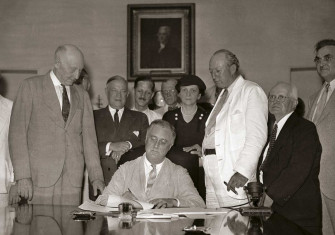