The mother goddess brings death and destruction – to those who deserve it.

With her lolling tongue, garland of decapitated heads and girdle of severed limbs, brandishing a bloodied sword in one of her four arms as she dances wildly on the prostrate body of her consort Shiva, the Hindu goddess Kali is not a typical image of nurturing motherhood. Yet she is widely revered as such throughout the Indian subcontinent. Kali is a warrior goddess, who slays evil as saviour of the innocent; she is the manifestation of the Divine Mother and of shakti, the positive universal creative cosmic energy.

However, the Western tradition has tended to emphasise the negative aspects of Kali’s appearance, seeing her as a fierce combatant, who becomes frenzied on the blood of her victims; perhaps akin to the Furies of Greco-Roman mythology, the underworld goddesses of vengeance, more representative of death and destruction than of fostering protection. The analytical psychologist Carl Jung described Kali as ‘terrifying and inescapable, like fate’, perhaps picking up on her name which, etymologically, is the feminine form of kala, or time, the ‘relentless devourer’. The contemporary philosopher Vrinda Dalmiya has described her unique power:

The mother here is anything but domestic … Kali is thus the paradox: she is the Primal Mother who brings forth all life even while she signifies death. … The fear of death, along with the Hindu belief in karma and rebirth, serves as an impetus to be moral.

Prototypical images of Kali go back at least 3,000 years to Vedic period India, whose literature helped shape Hinduism as we know it today. Kali first appears as a devis or goddess in the Sanskrit text Devi Mahatmyam (‘In Praise of the Goddess’), which in its best known form was probably written in the sixth century. She has various manifestations in Hinduism and shrines to and statues of her abound throughout India, not just in temples. On many a dashboard of the once-ubiquitous Indian taxi, the Hindustan Ambassador, one will see an image of Kali, the protective mother, and also in the name of chemists, restaurants and supermarkets. She even featured in posters for an eponymous brand of Indian cigarettes, when smoking was still promoted as beneficial to one’s health. Her influence is not confined to India; her protruding tongue was combined with Mick Jagger’s mouth by the designer John Pasche to create the ‘Hot Lips’ logo used by the English rock band the Rolling Stones. 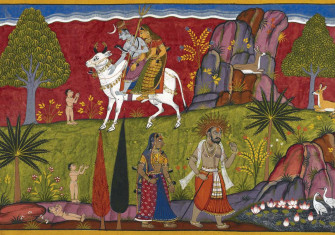 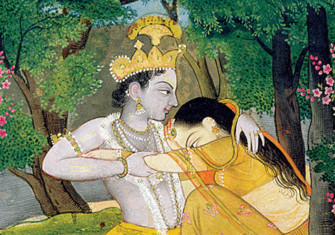