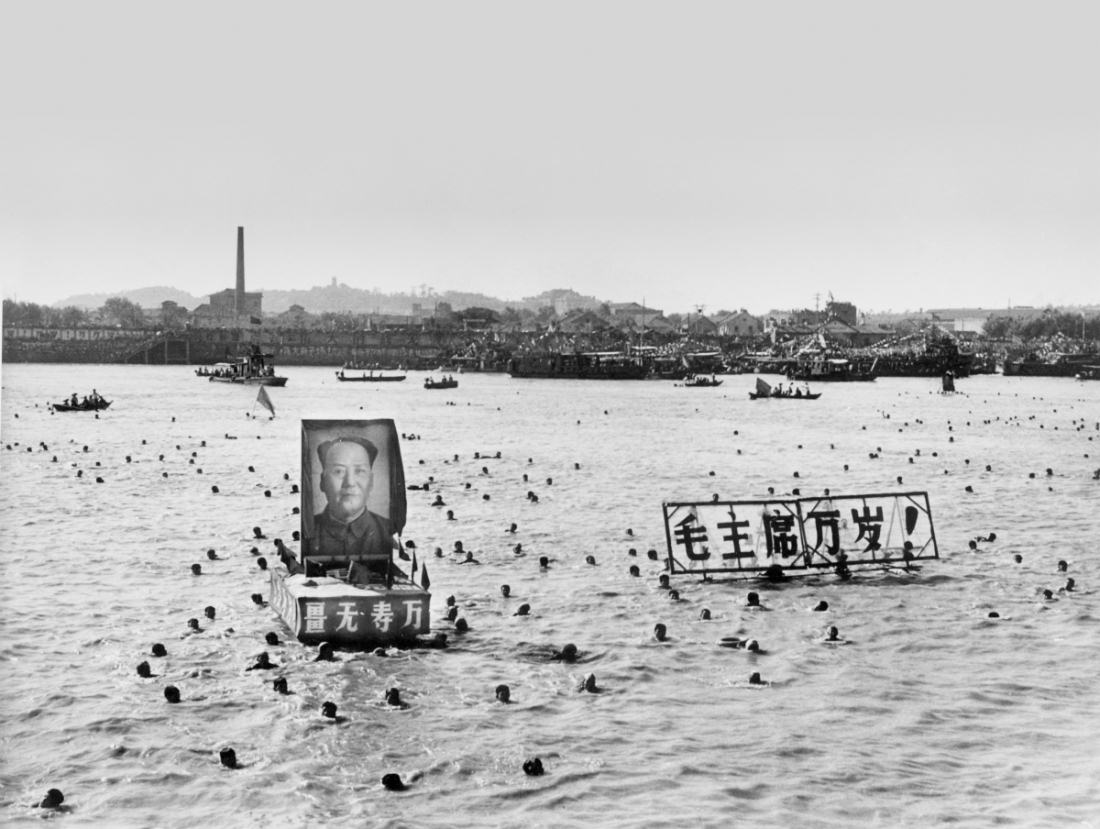 It is July 16th, 1966 and the 72-year-old Chairman Mao has chosen to join 5,000 other swimmers in Wuhan’s 11th annual Cross-Yangtze Competition. He is out to demonstrate that he is still vigorous, fit to lead his last revolution, which he has already set in motion, but which is soon to accelerate until seemingly out of control. Surrounded by six swimming bodyguards, accompanied by giant portraits of himself and by placards asking for 10,000 years of life for him, he stays in the water for 65 minutes, drifting some ten miles downstream with the powerful current. Whether he is joined by any of the attractive young women from what is known euphemistically as his ‘Cultural Work Troupe’ we do not know. Two days later he will be back in Beijing after a long absence, ready to ‘bombard’ the Communist Party headquarters, which he denounces as the great enemy, a hotbed of revisionism and feudal tendencies.

The Cultural Revolution had its origins in Mao’s earlier brainchild, the catastrophic Great Leap Forward of 1958-62. It was meant to modernise China through the wonders of collectivisation but instead set it back decades and killed at least 45 million in the famine that it generated. Eventually some of the other leaders were brave enough to suggest it was a result of human error rather than merely a natural disaster and Mao began to feel power slipping away into the hands of moderates such as Liu Shaoqi and Deng Xiaoping. His instinct was to recreate the conditions that suited him best: uncertainty and a measure of chaos. He had within him a constant struggle going on between the ‘red’ and the ‘expert’ and for the moment he wanted the red to have full rein. His first move was deviousness itself. In 1965 he dispatched his (fourth) wife, a former actress, Jiang Qing, later notorious as leader of the Gang of Four, to Shanghai, to arrange the denunciation of a play by a distinguished historian of the Ming Dynasty. This was then used to attack and subdue the Party in Beijing.

With Beijing secured he could move on to stage two, declaring in May 1966 that he was determined to create ‘great disorder under heaven’ so as ultimately to get ‘great order’. His tools were the university campuses and middle schools, where he allowed a mass of ‘big-character posters’ to be stuck up by the students, denouncing much of the current leadership. It had little idea what was happening and reacted by sending in Party ‘work teams’ to restrain the students. Mao then used the resulting violence as an excuse to undermine Liu and Deng. Student radicals, Red Guards, were given their head, encouraged to ‘smash and criticise’, to strike against ‘Confucius and Co’ and religion in general. The Little Red Book of Mao’s sayings was the only scripture they recognised. Forced public confessions of error followed by ritual humiliations were inflicted on former teachers, officials and politicians labelled members of the ‘Black Gang’. Everywhere children were set against parents, denouncing them for their backsliding.

Once rival factions of Red Guards began fighting and killing each other – and factories became affected – it was time to bring in curbs. A policy of ‘going down to the country’, dispatching urban youths to work with the peasants, was one device to cool the fevered atmosphere. Adult intellectuals were soon joining the teenagers there.  The end of the Cultural Revolution was finally signalled by President Nixon’s visit to China in 1972. ­