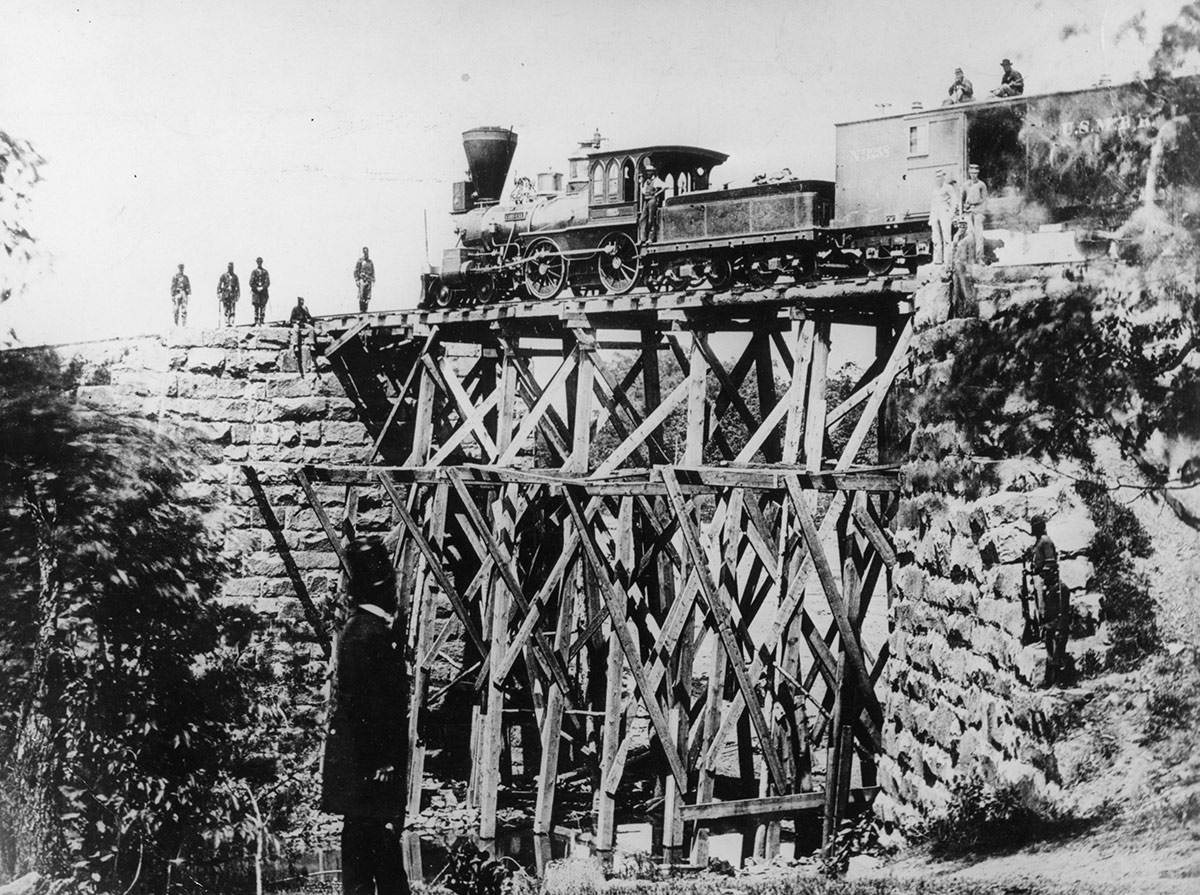 Roger Hudson expands on a photograph of a locomotive taken during the American Civil War by one of Mathew Brady’s team.

The American Civil War is entering its third year and so far the South has had the best of it. There have been two battles close to this spot, called First and Second Bull Run, or Manassas, as both sides fought to control the strategically vital junction of the Orange and Alexandria Railroad, running north to south in Virginia, with the Manassas Gap Railroad running east to west through the Shenandoah Range. First Bull Run, the opening battle of the war in July 1861, saw the Union forces routed; in the second encounter, in August 1862, they were again beaten but were able to retreat, in better order, back to the defensive lines round Washington DC. It must have been shortly after that this bridge at Union Mills, a little to the north of the junction, across a creek flowing into the Bull Run, was destroyed by the Confederate forces, maybe as General Robert E. Lee led them northwards three weeks later to fight the bloodiest one-day battle in US history, at Antietam. Now, in 1863, it has been temporarily repaired with wooden trestles and the North’s Fire Fly locomotive poses for a photograph by one of the pioneering US photographer Mathew Brady’s team. It makes a handsome sight, with its distinctive chimney to catch the sparks from its wood-burning boiler, its huge lantern and the gothic windows of the driver’s cab.

Early in 1862 Abraham Lincoln’s administration had made a key appointment when Herman Haupt, previously chief engineer of the Pennsylvania Railroad, was put in charge of the North’s railroads within the theatre of war. He brought efficiency, time savings and swift repairs. In May 1862, after he had rebuilt the bridge across Potomac Creek, Lincoln said: ‘That man Haupt has built a bridge 400 feet long and 80 high, on which loaded trains are passing every hour, and upon my word, gentlemen, there is nothing in it but corn stalks and bean poles.’ Haupt was probably responsible for the repair of the Union Mills bridge, the US Military Construction Corps able to do a job like that in a day or two, using timber cut down in the locality.

Mathew Brady employed 23 photographers to record the Civil War, each equipped with his own travelling dark room, something that Roger Fenton had pioneered a few years earlier when photographing the Crimean War. In October 1862 Brady had mounted an exhibition in New York baldly entitled ‘The Dead of Antietam’, which included pictures of corpses scattered on the battlefield taken two or three days after the battle the month before. Fenton had not taken such shots, but Felice Beato had, during the Third Opium War in China in 1860, when an Anglo-French force had stormed the Taku Forts on the way to Beijing. Brady’s team took over 10,000 plates during the war and, although the US government refused to buy the collection from him afterwards, a great many of them have survived.