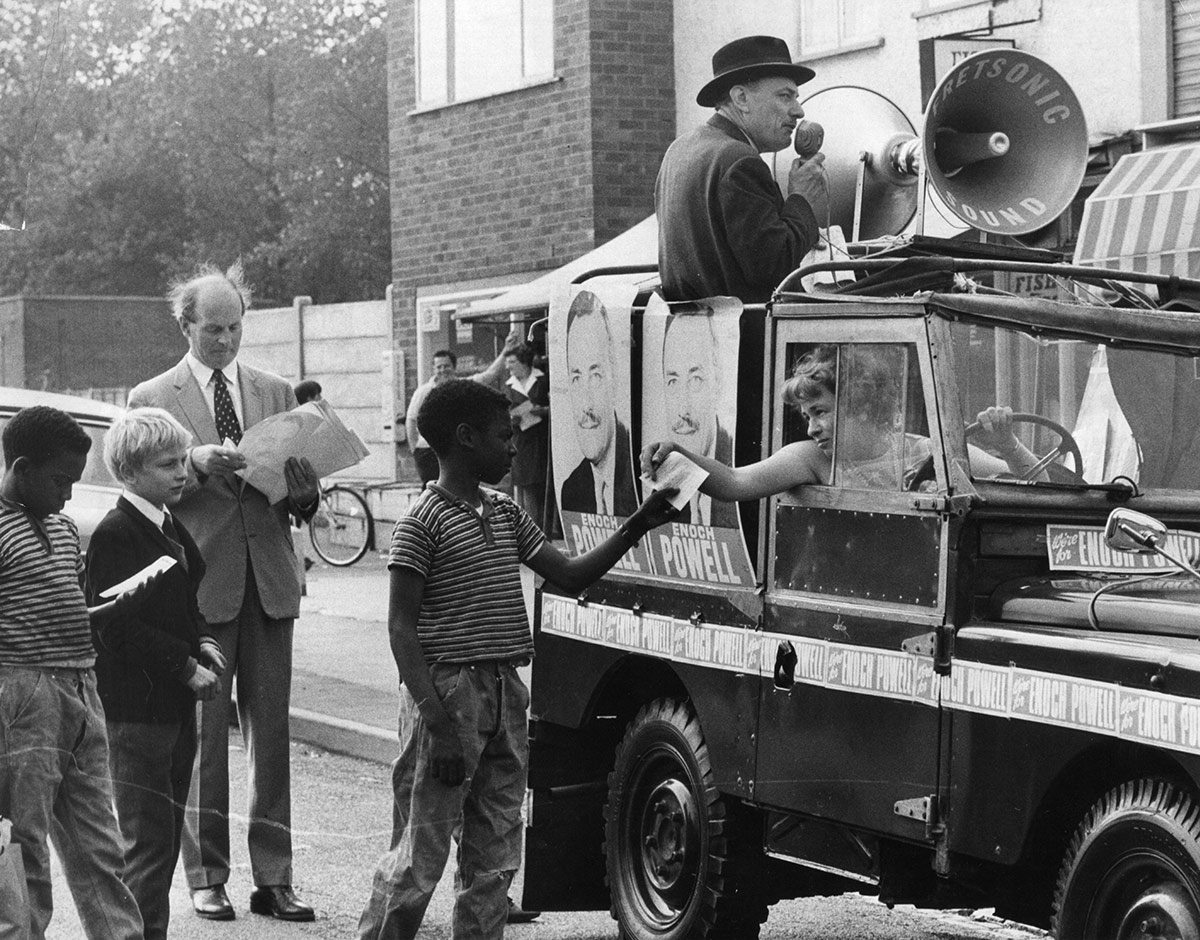 Enoch Powell at the Polls

Roger Hudson expands on a photograph of Enoch Powell campaigning in his Wolverhampton seat in 1970.

The photographer must have thought Christmas had come early when he got this shot of Enoch Powell campaigning for re-election in Wolverhampton in 1970. He appears to ignore the two black boys, possibly twins, and it is left to his wife, Pamela, to hand one a leaflet. There is an additional quirkiness in the hat and overcoat he wears on what is obviously a warm day, judging by the children’s short sleeves and Pamela’s sleeveless dress. The hat may be his trademark but under the circumstances his identity is hardly in doubt. In fact this photographer was not the only lucky one; another managed to position a white boy blowing a balloon of bubblegum in front of Powell in his Land Rover.

Powell had demonised himself two years before with a speech at Birmingham, breaking the taboo against discussion of immigration and what he saw as its consequences: ‘Like the Romans, I seem to see the River Tiber foaming with much blood.’ Britain was ‘mad, literally mad as a nation’ to allow 50,000 dependents of immigrants to enter the country each year. That he, a professor of Greek at the age of 25, was quoting Virgil did not stop Heath from sacking him from his shadow cabinet the next day. Marches by dockers and Smithfield meat-porters protesting at his victimisation and a poll showing that 74 per cent of the population agreed with him could not get him back into the fold. He was firm in the years to come that he never talked about race, that his speeches were about immigration and even Labour leader Michael Foot acknowledged that. Unlike most Conservative MPs his urban constituency meant he knew the impact concentrations of immigrants could have on housing, education and crime. If his record was examined it would be found that he had learnt Urdu and studied India’s literature while serving there during the war and that in 1959 he had made one of the century’s great speeches in the Commons, condemning the Hola Camp killings during the Mau Mau emergency in Kenya. But his language in 1968 was far too intemperate and his story of the little old lady, the last remaining white person in her street, having excreta put through her letter box, he seemed not to have heard at first hand and not to have checked. Perhaps the most damaging consequence was that any debate on immigration for the next 40 years was dead before it began.

Although re-elected as a Conservative in 1970 Powell’s contempt for Heath steadily grew over what he regarded as the latter’s dishonest handling of British entry to the European Economic Community (EEC), his introduction of an incomes policy when he had expressly ruled it out in the 1970 manifesto and his imposition of direct rule in Ulster. In the first of the two 1974 general elections Powell did not stand and in fact advocated voting Labour, to which Heath attributed his defeat. A figure of lonely eminence, unsuited to the compromises of party politics since he was not prepared to depart from the road down which his sometimes frightening logic took him, Powell was an outstanding champion of the constitution and of Parliament (hence his deep distrust of the EEC), a pioneering monetarist, a fervent advocate of denationalisation and deregulation. So it was ironic that from 1974 to 1987, in the years that Mrs Thatcher came to power and adopted so much of his programme, he sat in the Commons as an Ulster Unionist.