Graeme Garrard describes the events that led to the torching of the new US capital by British troops in August 1814 and considers the impact of the ‘greatest disgrace ever dealt to American arms’ on the US, Britain and Canada. 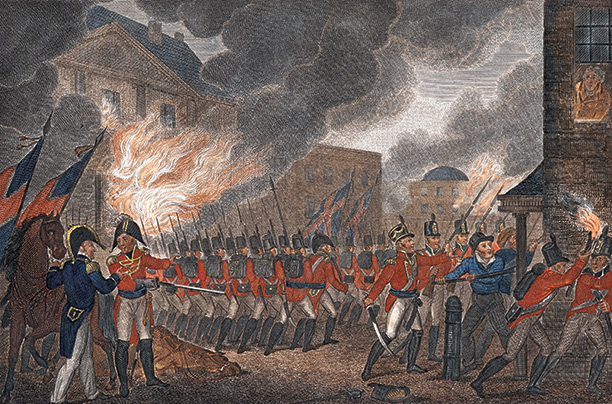 When James Madison, fourth President of the United States and ‘Father of the Constitution’, signed a declaration of war against Britain on June 18th, 1812 he could scarcely have imagined that two years later he would be fleeing from his burning capital before the invading enemy. At the start of the ‘War of 1812’, the first the US had declared on another nation, his friend and predecessor as president, Thomas Jefferson, had smugly declared that the war against Britain’s colonies in what is today Canada would be ‘a mere matter of marching’. As Madison abandoned the White House on horseback with his entourage and raced towards Virginia on August 24th, 1814 he stopped and looked back as he beheld the ruined city of Washington. The smoke from flames that engulfed it could be seen as far away as Baltimore, Maryland. Although he left no personal account of his feelings about these shattering events, the normally imperturbable president must have been deeply shaken by the turn they had taken, as were most Americans. What his many domestic critics had derisively branded ‘Mr Madison’s War’ had led to the only foreign occupation of the US capital in its history.