The Strait of Hormuz has become a fraught passage in the Tanker Wars between Iran and Iraq. 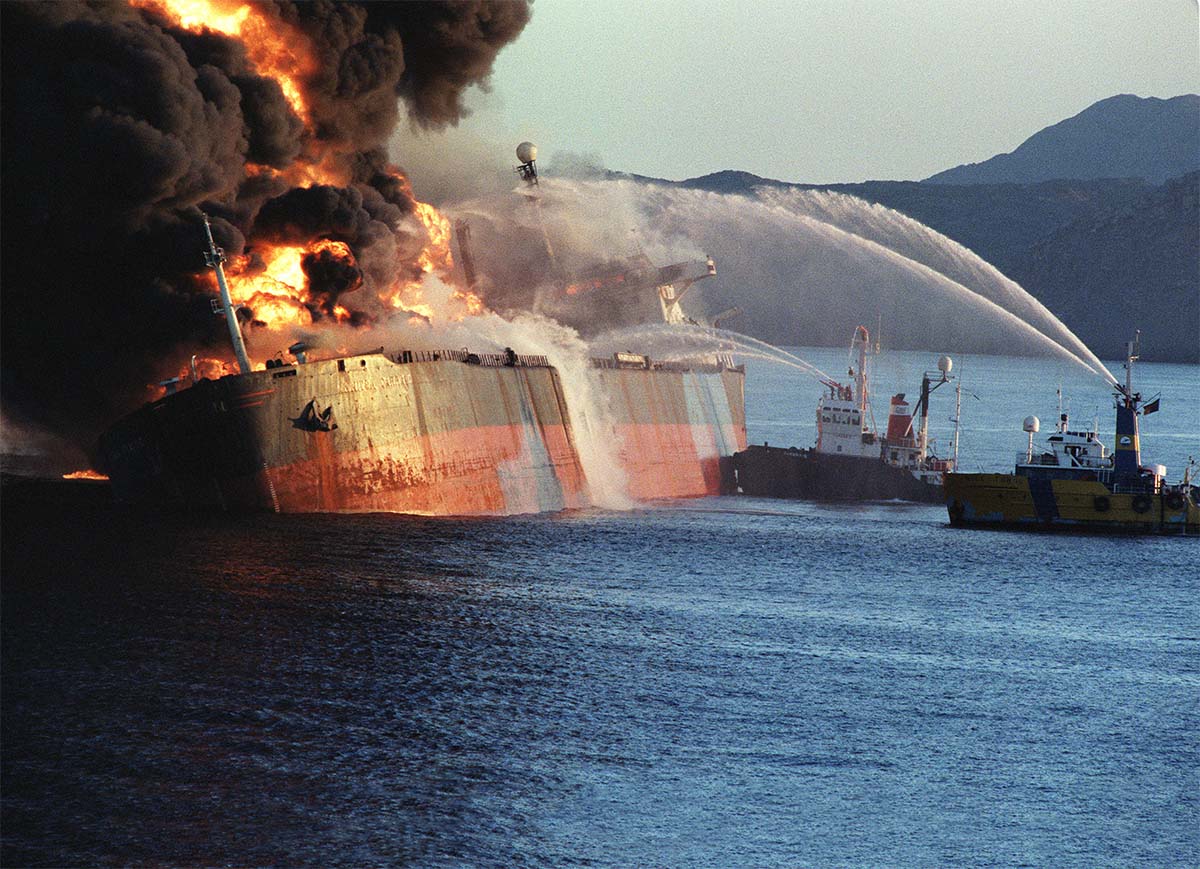 The war between Iran and Iraq, which lasted for most of the 1980s, was one of the bloodiest conflicts of the late 20th century. Casualties on both sides numbered in the hundreds of thousands. At times the combat zones bore more than a passing resemblance to First World War battlefields, with opposing trench systems arrayed along miles of front, massed infantry attacks pushed forward over the top and chemical weapons an increasing method of both attack and defence. The Iran-Iraq conflict was in the main a large-scale ground war with naval operations a decidedly subordinate field of operations.

Nevertheless, it is the naval aspect of the war – in particular the decision by both sides to attack enemy merchant shipping – which most resonates today, as tensions between Iran and the United States once again begin to escalate.

The targeting by Iran and Iraq of each other’s merchant shipping, and in particular oil tankers, became known as the Tanker War. It represented the most sustained attack on merchant shipping since the Second World War and resulted in over 400 civilian seamen killed, hundreds of merchant ships damaged and substantial economic losses. Its broader significance lay in the danger such attacks posed to an international economy critically dependent on oil exports traversing Gulf waters. Equally significant was the Tanker War’s potential for escalation as outside powers became drawn into the conflict with the intention of ensuring freedom of navigation.

Conflict over control of the Gulf predated the emergence of the modern states of Iran and Iraq. The discovery of oil in the region, however, exacerbated competition for control of the waterway, especially over its two key areas: the northern Shatt al-Arab, the river which provides access to oil producing areas and links inland oil refineries with Gulf ports, but which unfortunately also straddles the disputed Iran-Iraq border; and the southern Strait of Hormuz, the choke point which connects the waters of the Gulf with the Gulf of Oman and the Arabian Sea. Vessels entering and exiting the Strait of Hormuz were restricted to two sea lanes, each two nautical miles wide and separated by a three nautical mile wide channel.

Guardian of the Gulf

Iraq’s strategic predicament was that, though reliant on oil exports through the Gulf, its small coastline made the country vulnerable to blockade, a danger reinforced by the proximity of Iranian forces. While never missing an opportunity to stress its rights to the Shatt and the broader Gulf, Iraq’s position had worsened in the 1960s as Britain withdrew from the region and the US sought to strengthen the Shah’s regime by upgrading the Iranian navy. The Shah believed Iran had a moral responsibility to be the ‘Guardian of the Gulf’, which included control over shipping and resisting Iraqi efforts at expansion. In the early 1970s Iran used its growing naval strength to seize the strategically important islands of the Greater and Lesser Tunbs. It was also able to exploit a Kurdish revolt in Iraq to secure Baghdad’s signature of the so-called 1975 Algiers Agreement, which dashed Iraqi hopes for an expanded coastline and greater control of the Gulf. By the late 1970s the Iranian navy patrolled the Strait of Hormuz and oversaw its traversing by international tanker traffic.

This balance of power in the Gulf waterway shifted dramatically following the Iranian Revolution of 1979. The small Omani navy took over the patrolling of the Strait. The collapse of the Shah’s regime reignited Saddam Hussein’s aspirations and enhanced Iraq’s economic and military position within the Gulf. 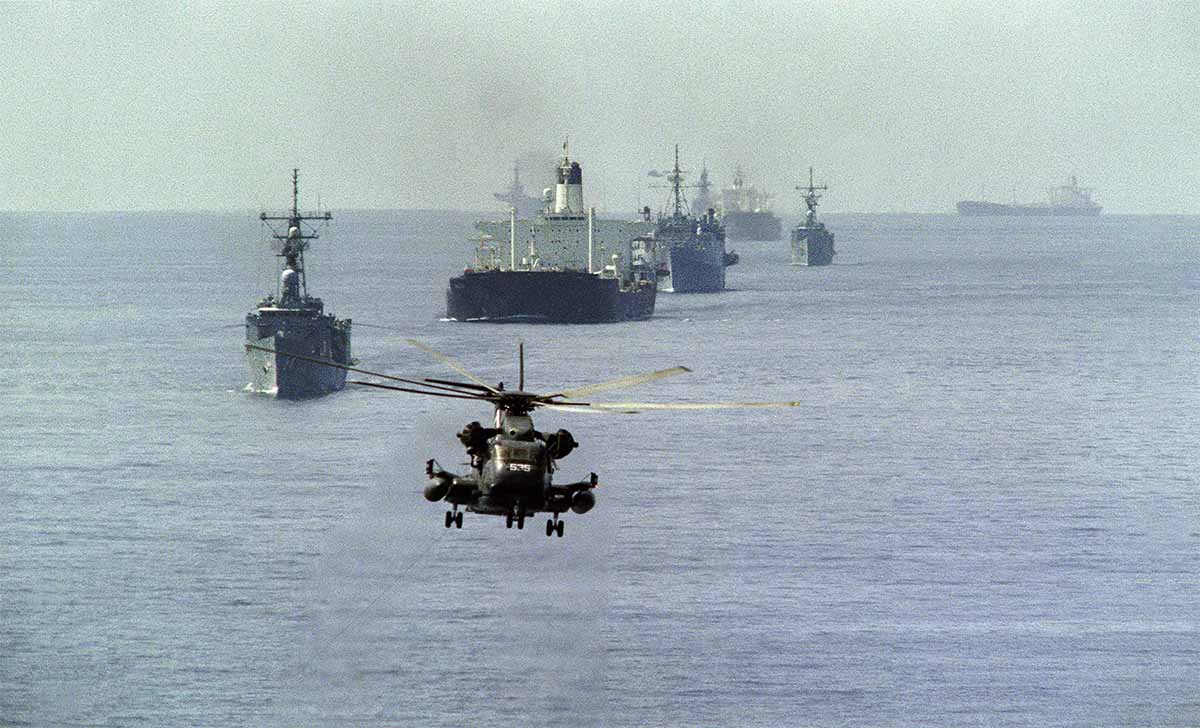 From the outset of hostilities in 1981 until 1983, Iraqi anti-shipping strikes were intermittent and primarily targeted Iranian ships in the northern Gulf. In these operations the Iraqi air force employed Mig 23s, Mirage F-1s and Super Frelon helicopters armed with Exocet anti-ship cruise missiles. To the extent that anti-shipping operations reflected broader Iraqi strategic thinking, the operations sought to support land operations in the wider theatre. Internationally flagged vessels also found themselves embroiled in the conflict and in May 1982, Atlas 1, a Turkish oil tanker loading Iranian oil at Kharg Island, became the first tanker to be hit.

France’s supply of aircraft enabled Baghdad to increase the range of its anti-shipping Exocet strikes in 1984 and intensify its operations against Iranian oil export facilities. Iranian installations on Kharg Island were particularly hard hit. Iraq’s anti-shipping escalation coincided with its fading hopes for an easy victory against the revolutionary regime in Tehran. An emerging stalemate and attrition on land against a potentially more powerful enemy forced Iraq to try more indirect operations. In February 1985 a Liberian tanker, Neptunia, was hit by an Iraqi Exocet and became the first tanker to sink as a result of a missile strike.

While the weight of Iraqi efforts always remained ground-based, these anti-shipping strikes, particularly against Iranian oil tankers and associated installations, were viewed as a means of bringing economic pressure to bear on the Iranian regime. Iraq may also have calculated that, by attacking this vital Iranian supply line, it would force Iranian escalation in kind, which would ultimately lead to international intervention aimed at protecting maritime freedom. Regional and international intervention was regarded by the hard-pressed Saddam Hussein as the one means of protecting his rule against an increasingly resurgent Iran.

In 1984 Iran indeed began to respond to this Iraqi escalation with its own attacks on merchant shipping linked to Iraq. Iranian strategy aimed at punishing Iraq and its Gulf allies, while at the same time compelling Iraq to desist from its anti-shipping campaign.Lacking the sophisticated Exocet systems, the Iranians relied on a range of smaller payload weapons such as AS 12s and Mavericks. The large size of oil tankers meant they generally withstood the Iranian strikes (most did not sink), but accommodation blocks proved vulnerable and, when attacked, resulted in significant casualties. It was not until 1987 that Iran began to deploy an effective, dedicated anti-shipping missile in the form of the Chinese CSSC-2 Silkworm. Nevertheless, anti-shipping cruise missiles remained the dominant means of attack for both protagonists. Throughout the war Iran proved more adept than Iraq in using a variety of methods of attack; the use of mines west of Farsi Island and in the Gulf of Oman caused significant disruption to Gulf shipping.

As Iran augmented its capabilities and expanded its targeting, international shipping began to feel the effects. Iraq’s Gulf neighbours were particularly hard hit and their shipping began to suffer from Iranian attacks. Kuwaiti authorities felt especially vulnerable and called upon the international community to reflag Kuwaiti vessels as a deterrent to Iranian strikes. While western countries at first prevaricated, the assault on international shipping and the danger that Iranian actions could potentially cause the closure of the Strait of Hormuz ultimately resulted in US-led naval intervention in 1987. 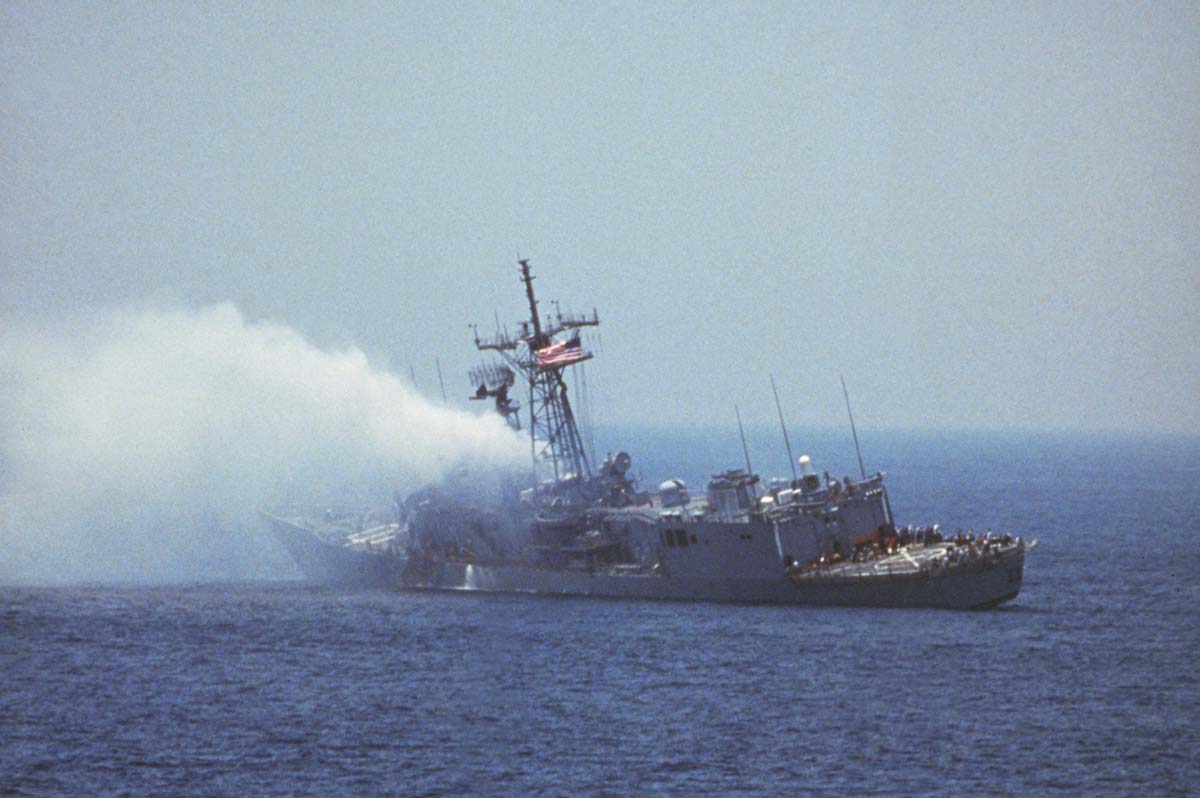 This carried its own dangers. Even before the beginning of the reflagging exercise, whereby Kuwaiti ships were reflagged as American vessels and escorted up and down the Gulf by the US navy, the Americans had already suffered casualties. In May 1987 the guided missile frigate USS Stark suffered 37 dead following an apparently accidental Iraqi Exocet strike. Ironically it was this attack from an Iraqi missile that helped pressure Washington into inserting its naval forces into the Gulf so as to protect against Iranian strikes.

American intervention ultimately helped contain Iranian anti-shipping activities, ensured freedom of movement for international shipping in the Gulf and also eventually increased pressure on Tehran to seek peace with its neighbour. Significantly, US involvement did not go unopposed by Iran and their use of anti-shipping mines initially proved a particular challenge. This stage of the war saw clashes between US and Iranian forces, including the mining of the USS Samuel B. Roberts, the sinking of Iranian frigates and the accidental shooting down of an Iranian civilian airliner. These incidents always risked broader escalation, but the conflict remained contained in Gulf waters.

The shift in the balance of forces in the Gulf resulting from US intervention was one of the reasons Iran ceased hostilities in 1988.

Ultimately the Tanker War did not lead to the closing of the Strait of Hormuz, nor did it significantly impact upon oil exports from the Gulf or result in sustained increases in oil prices. According to some estimates, the combined campaigns of both Iran and Iraq never disrupted more than two per cent of ships in the Gulf.

Since these battles in the 1980s the Iranian Revolutionary Guard has invested heavily in a range of anti-shipping capabilities, including small submarines, mines, anti-shipping weaponry and large numbers of fast attack boats geared towards swarming tactics.

The threat to international shipping and freedom of movement through the Strait of Hormuz remains ever present. During the Tanker War, Iran threatened to close the Strait but never did so because it remained dependent on an open Strait for its exports. This dependence remains acute. In any event, in the face of dedicated US and international counter-measures, Iran’s ability to close the Strait for long periods remains doubtful.

Martin S. Navias is a teaching fellow at the Department of War Studies, King’s College London.

A shorter, online-only version of this article was published on 14 June 2019. You can read this here. 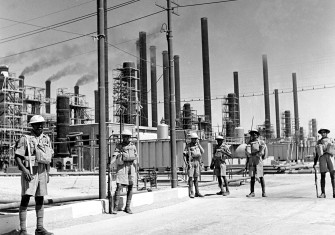 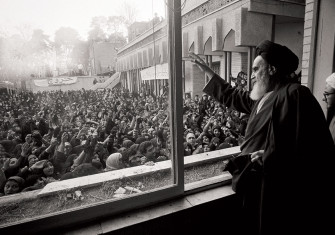