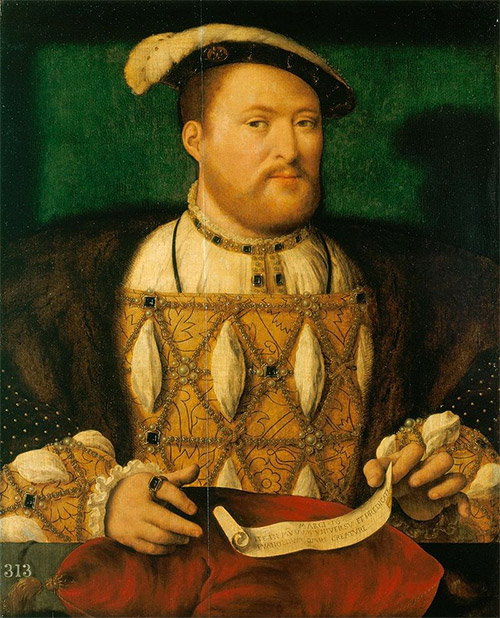 The dawn of Henry VIII’s reign was greeted by court writers with almost hysterical optimism. The 17-year-old was hailed as the ‘everlasting glory of [his] time’, equal to Adonis and Achilles and 1509 was to mark ‘the [end] of our slavery, the beginning of our freedom’. As Steven Gunn explored in his article Portrait of Britain in 1500 (2000), Henry’s accession coincided with a period of revitalisation for his country. ‘Living standards were comparatively high’, Gunn noted: England was under-populated, pastoral farming was thriving, serfdom withering, literacy expanding and an English builder’s wage in the 1500s ‘bought more food than in any decade until the 1880s’. After 50 years of royal ‘depositions, two murders and a death in battle’ the peaceful succession of an (almost) adult male to his father was remarkable. The last time it had occurred was 1413.

For all this celebration, life at the beginning of the 16th century was not quite the idyll it appears. Gunn reported that enclosure ‘bred strife in 1500’, which is to put it mildly. Court records reveal contests over enclosed lands spiralling into violence, triggering lawsuits that dragged on for decades.

Global horizons had expanded with the discovery of the ‘New World’, but the English remained fiercely protectionist. The ‘devious and crafty means of the foreigners’ were suspected of undermining native industries. Anti-immigrant violence, such as the 1493 siege of the German steelyard in London, suggest that labour shortages and a thriving economy did not put a stop to anxiety.

Religious non-conformity was also of concern. Repression of the heresy of ‘Lollardy’ in 1510-2 saw so many public burnings that one contemporary joked that the price of firewood had rocketed. For Lollard-hunters, such as the Bishop of Coventry and Lichfield, literacy among the low born was not a symbol of progress but a warning sign of heresy and ‘damnable books’ were dangerous items to be destroyed.

Unrest was triggered by food shortages as harvests failed in the 1520s and ‘disease killed far more than hunger’. The chronicler Edward Hall lamented that in 1509 ‘the plague was great and reigned in diverse parts of the realm’. This could have been the old diseases of dysentery and smallpox, or perhaps it was the new scourge, sweating sickness, which struck down the healthy and wealthy with horrifying speed. The medical knowledge of the 16th century was no match for epidemics, which were symptoms of moral malaise for which the ‘highest remedy’ was ‘penance and confession’.

Though the poet John Skelton celebrated Henry as the symbol of the ‘rose both white and red’, there were still many survivors of the old conflicts between York and Lancaster: over-mighty subjects such as the Duke of Buckingham, or Yorkists like the imprisoned Marquess of Dorset and impoverished Margaret Pole.

Nor was the literary flurry at Henry’s accession a sign of Tudor popularity. His father’s financial manipulation, local interference and network of ‘questmongers’ (spies) had bred resentment. That the young monarch was aware of this troubled inheritance is clear in the two days of subterfuge that began his reign, during which his father’s death was kept secret while a coup was launched against his chief ministers, Empson and Dudley.

In this period of uncertainty, communities banded together. The ritual year gave an opportunity for expressions of community pride and self-identity, expressed through guild-based performances, civic processions and congregations at parish churches.

Knowing the turbulence to come, perhaps the 1500s did represent a golden age. By the mid-16th century, as Gunn points out, charitable provision ‘could not cope’ with the needs of the destitute. By that time welfare support from guild and parish was undermined and the rhythm of the ritual year shattered by Henry’s religious reforms. His reign was to see England severed from the ‘universal’ church of Rome. The next 40 years saw plague, rebellion, military loss and debased coinage. Few today would consider Henry the ‘everlasting glory of [his] time’.

Lauren Johnson is the author of So Great a Prince: England and the Accession of Henry VIII (Head of Zeus, 2016).